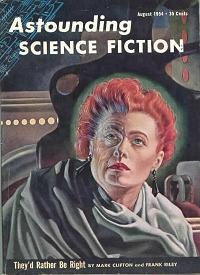 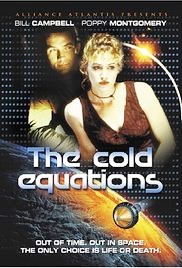 X Minus One aired “The Cold Equations” on August 8, 1955, as its fifteenth episode. In November of 2012 we ran a shorter version (17:41) of this story which aired on Exploring Tomorrow in 1958. This much shorter adaptation was hosted–as were all Exploring Tomorrow episodes–by legendary Astounding editor John W. Campbell, Jr. If you remove his introduction, closing thoughts, and interspersed commentary, the show ran but a mere 13 minutes and change. Some listeners like this version better than this X Minus One adaptation though it is almost twice as long and sports better production values. Both versions have their advantages, so if you would care to compare them here is the link to the Exploring Tomorrow version. The bulk of the remainder of this introduction is taken from the Exploring Tomorrow introduction, though I have added additional material for this presentation.

Tom Godwin’s (June 6, 1915-August 30, 1980) “The Cold Equations” first appeared in the August 1954 issue of Astounding Science Fiction (cover at left).  It is one of the most reprinted stories in science fiction history and several attendant controversies have catapulted the story to one of almost legendary status. Some have claimed that Godwin stole the basic idea from a 1952 story in the EC comic Weird Science, while others cite a similar story situation in a 1949 E. C. Tubb story. Those defending the story claim it is naught but a variation on the much older theme of the one sacrificing for the many.

“The Cold Equations” has also given rise to more current controversy and speculation because it is a female at the heart of the story who must face the consequences of her actions, the female component added at the request of editor Campbell who felt the emotional aspect of a helpless woman in dire straits for his predominantly male readership would enhance the impact of the story. Feminists and others have taken issue with this decision, though the story was written in the 1950s. It has been dramatized several times for television (The Twilight Zone, et al), and was made into a 1996 made-for-television movie for the (then named) Sci-Fi Channel (DVD cover top right).

A bare-bones synopsis of the story runs like this: a rescue ship is being sent to the planet Woden where members of the exploratory/survey crew have contracted a deadly fever. The Emergency Dispatch Ship (EDS) is delivering a serum they need to survive the fever and save the small colony. There is just enough fuel (given the weight of the ship, its lone occupant, the plotted trajectory, mass, etc.) for the ship’s pilot to land and deliver the serum in time. He will have to live on the planet with the survey crew for a year, until another larger, more equipped ship can bring him home. The pilot then discovers a stowaway on his ship, a young slip of a girl who only wants to visit her brother (changed to husband for this adaptation) down on the planet. This presents a problem and is the major theme of the story. With the girl’s added mass the ship will run out of fuel before it reaches the planet and the sixteen colonists will die. After going through every other option, there is only one solution: the girl must be jettisoned out the airlock; it’s her one life against those on the planet. You can’t argue against the cold equations imposed by the harshness of space. It’s an emotionally gripping story, even though you know how it’s going to turn out, which makes this one of the most talked about, praised, and simultaneously argued-over stories in SF history.

“[‘The Cold Equations’] is one of the most popular and controversial hard sf stories of the last fifty years. …”
—David G. Hartwell, The Ascent of Wonder

“The impact [of ‘The Cold Equations’ on publication] was immediate …. The impact of the story . . . remains the same now as then.”
—Harry Harrison and Brian W. Aldiss, The Astounding-Analog Reader

{Dreading the return to school in less than a month after the always too-short summer vacation, the neighborhood gang knew they could buoy their spirits with a trip to the corner newsstand, where they could lose themselves gazing at shelf after shelf of their favorite SF magazines, a few of which are shown below. All three magazines were published monthly, Astounding and Galaxy from their debut issues (1930 and 1950 respectively), while it took F&SF a few years to hit its full stride as a monthly, it’s first issue cover dated Fall 1949. With its August 1952 issue F&SF bcame a full-fledged monthly publication and would remain so until its April/May 2009 issue when it went to a double-sized bi-monthly publication schedule.} 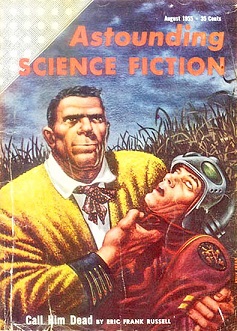 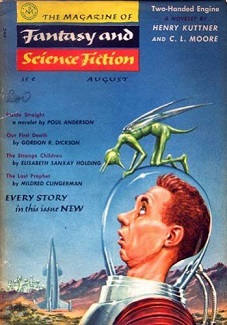 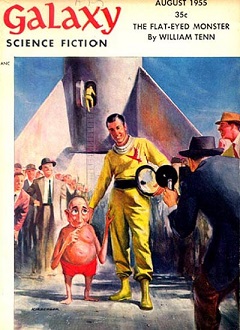