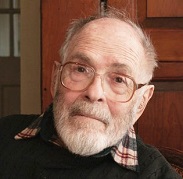 X Minus One (1955-58) aired Ernest Kinoy’s original story “Real Gone” on February 27, 1957 as its 90th episode out of 130. Kinoy (1925-2014), along with George Lefferts, adapted all of the show’s stories previously published in the pages of (mostly) Galaxy, and Astounding. From time to time, as is the case here, they would pen their own original stories. Kinoy had a long and distinguished career in radio and televison, beginning in 1948 when he joined NBC where he wrote both radio and tv scripts. He left NBC in 1960 and in 1964 would win the first of his two Emmys for his script for “Blacklist,” an episode of the popular tv show The Defenders, about a writer who had been on the infamous “Hollywood blacklist,” due to the House Unamerican Activities Committee’s (HUAC) blacklist of suspected communists. Co-scripted with William Blinn, Kinoy would win his second Emmy in 1977 for the second episode of the tv mini-series Roots. His writing credits for film and tv are numerous, a few of them for tv being The Defenders, Route 66, Dr. Kildare, The Naked City, and adaptations of Brigadoon (1966) and Pinnochio (1968). Perhaps his most well known move script was that for 1972’s Buck and the Preacher, starring Sidney Poitier and Harry Belafonte. Kinoy held the office of President of the Writers Guild of America, East from 1969-71.

Serving in the 106th Infantry Division deployed to the European Theater of Operations in World War II, Kinoy was captured and spent time as a POW at Stalag IX-B, but being Jewish was then transferred to the slave labour camp at Berga. Living a full and rewarding life, sharing it with a loving wife with whom he had two children, he passed away from pneumonia on November 10, 2014 at the age of 89.

“Real Gone” is a tale of how Art and Science can compliment each other to great (and sometimes profitable) effect–if greedy humans don’t get in the way. Kinoy treats the listener to a whacky idea involving a sculptor whose success is dependent on a scientific process, a process without which his creative efforts would be impossible. I can’t reveal anything more without a spoiler, but will say the way the story resolves the conflict it raises is quite fitting. And what about that “whacky idea” for a sculpture? I think it’s kind of neat and wish they were a reality and could be made to order at the customer’s whim. Upon further reflection, science via chemistry has already given us what Kinoy postulates, though without quite the capability to achieve the end result as we see at the end of the tale.

1957 was a good year for SF novels and collections, some of which first saw print in the magazines years before and were then published in book form. Among them were Earthman’s Burden by Poul Anderson and Gordon R. Dickson, Tales from the White Hart by Arthur C. Clarke, The Green Odyssey by Philip Jose Farmer, The Shores of Space by Richard Matheson, Star Born by Andre Norton, Slave Ship by Frederik Pohl, The Winds of Time by Chad Oliver, Empire of the Atom by A. E. van Vogt, Big Planet by Jack Vance, and The Midwich Cuckoos by John Wyndham.

{By February of 1957 a few of the older SF pulps were no more and new magazines were beginning to take their place and attract a faithful following. That said, Astounding SF (1930-present, now Analog) was as rock solid as ever with its monthly schedule, and the issue below not only gave the cover story to what would be one of H. Beam Piper’s most famous but was graced by one of past master Kelly Freas’s terrific covers. The Magazine of Fantasy & Science Fiction (1949-present) was definitely hitting its stride in 1957 as the cover below shows. Look at the names on that issue’s cover, among which is Walter M. Miller, Jr.’s “The Last Canticle” which would go on to form part of one ofthe most important, critically acclaimed novels in SF history, A Canticle for Leibowitz. The novel would win the 1961 Hugo for Best Novel and has been in print ever since. F&SF had been on strong footing with a monthly schedule for a few years at this point. Galaxy (1950-1980), also a solid monthly, was taking SF in a different direction in the 1950s under editor Horace Gold’s direction, and published many of SF’s most well received (and now classic) stories. Willy Ley would also pen a regular science column, many geared to the theme of space travel as the cover below indicates. Little did anyone know in February of 1957 that a short eight months later, on October 4, 1957, the Soviets would launch Sputnik I, and the Dawn of the Space Age would begin.} 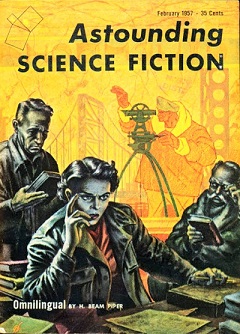 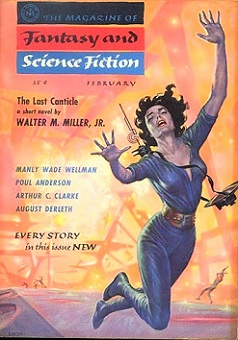 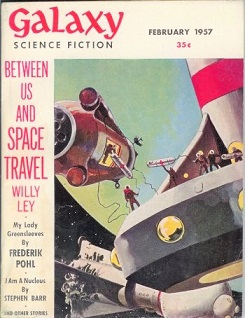