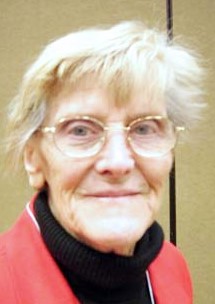 X Minus One aired Katherine MacLean’s short story “Pictures Don’t Lie” on October 24, 1956 as its 72nd episode. The story originally appeared in the August 1951 issue of Galaxy.

One of the most long-lived themes in science fiction, virtually from its very beginning (and even before) is that of first contact with an alien civilization, and the concomitant storyline of communication with an alien species. The stories number in the thousands and attack the complex problem of effective communication with alien beings who view the universe in ways strange and unfathomable to us. Sometimes communication is impossible. Other times it is exceedingly difficult and may lead to fatal consequences even with the best of intentions. How authors continue to show us the infinite possibilities and problems associated with communicating with an alien species (after thousands of such stories) never fails to amaze.

“Pictures Don’t Lie” is the story of an interstellar species heading our way who make contact with Earth via signals that we must unscramble to understand. Katherine MacLean (1925-    ) asks us to take to heart what both sides learn in this tale of what appears to be a friendly species desiring nothing but friendship and our assumption that “Pictures Don’t Lie.”

Besides “Pictures Don’t Lie,” other fiction to grace the pages of the August 1951 issue of Galaxy include Wyman Guin’s novella “Beyond Bedlam,” Lester del Rey’s short story “Operation Distress,” Sylvia Jacobs’ novelette “The Pilot and the Bushman,” Frank M. Robinson’s novelette “The Fire and the Sword,” and Ray Brabury’s short story “A Little Journey.” A pretty decent table of contents, I’d say.

1956 saw the death of veteran horror film actor Bela Lugosi. In 1956 there were seven thousand drive-in theaters in the United States. Marilyn Monroe married playright Arthr Miller. The first neutrino was observed along with the first successful picture of the DNA molecule. Television saw the debut of The $64,000 Dollar Question, As the World Turns, and The Edge of Night, though I Love Lucy continued to hold its number one ratings spot.

1956 was a great year for short fiction and a decent one for novels, with a few excellent exceptions. The 14th Worldcon was held in New York (Newyorcon), where Robert A. Heinlein’s serialized novel Double Star (Astounding, Feb-Apr.) won the Hugo award for Best Novel. Two of the best SF movies (now classics) appeared in theaters in 1956–Forbidden Planet and The Invasion of the Body Snatchers. And among those selling their first stories were Carol Emshwiller, Harlan Ellison, J. G. Ballard, Christopher Anvil, and Brian W. Aldiss.

{October of 1956 saw mothers around the country heaving a sigh of relief as their beloved munchkins were back in school. That meant Saturday became the default day for our little neighborhood SF fans to hit the corner drugstore to keep up with their favorite reading (it beat heck out of doing geography homework). A few of the many magazines they had to choose from are shown below. Astounding and F&SF had their usual monthly offerings, but Infinity was able to publish only five issues in 1956.} 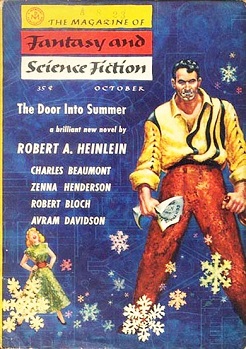 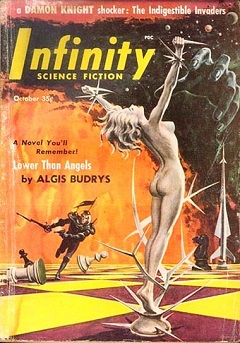