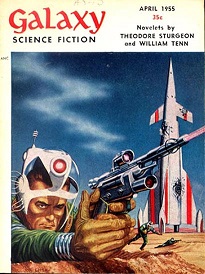 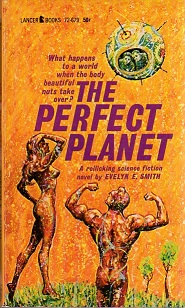 X Minus One (1955-58) aired Evelyn E. Smith’s short story “Man’s Best Friend” on April 24, 1957 as its 98th episode. It originally appeared in the April 1955 issue of Galaxy. Not terribly prolific novel-wise, Smith wrote three genre novels (one each in the decades of the 60s, 70s, and 80s) and some fifty-plus genre stories from the early 1950s through the 1960s, many appearing in Galaxy or Fantastic Universe, with nearly a third showing up in F&SF. In the late 1980s and early 1990s she would turn her hand to writing the Miss Melville Mystery Series, which Wikipedia describes as chronicling the “exploits of a middle-aged socialite-turned-assassin.” I think the author had a ghoulish fixation on the assassins. Much of her short fiction displays wit and humor, and satires like “Man’s Best Friend” were not uncommon. Her first novel The Perfect Planet (Avalon, 1962; Lancer 1963 edition cover at right) shows a world devoted to body building eventually taken over by women. The satire is plainly evident here as well.

“Man’s Best Friend” takes place in a whacky future where an Overlord reigns for a set number of years and then is officially “retired” by sanctioned assassination, the assassin chosen by lottery and who then becomes the new Overlord in turn. A huge parade of the citizenry comes out for the assassination and crowning of the new Overlord, while streetside vendors hawk refreshments to the enthusiastic throng–hashish and yogurt being among said treats. Satiric and sassy, the end comes as a complete surprise and all I dare say here is that it is one mother of an ending.

Evelyn E. Smith was born July 25, 1922 and died on this very day–July 4–in the year 2000. For what it may be worth, the airing of this radio adaptation of her story is our little tribute to her, fifteen years after her passing.

{Late April of 1957 would find youngsters gathered around the radio to listen eagerly to this X Minus One show. The next morning (hopefully a Saturday) would find them gathered at the corner drugstore where they would spend ten cents of their allowance on a cherry or vanilla fountain coke, and the remainder on their favorite magazines, a few of which are showcased below. Note that while Astounding and F&SF were monthlies, The Original Science Fiction was bi-monthly} 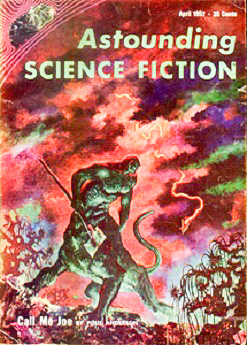 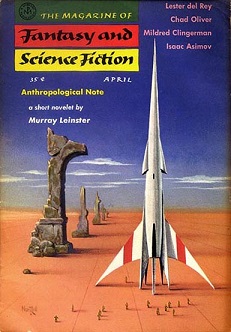 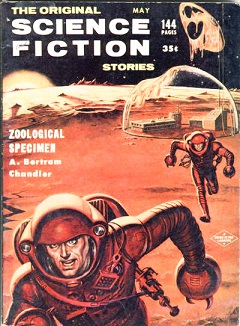