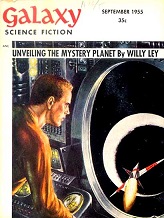 X Minus one (1955-58) aired F. L. Wallace’s short story “End as a World” on August 1, 1957 as its 105th episode. End of the world stories have been done fairly often in the genre, no few where the people know it’s coming and the author provides his vision of how people might react. Will they abandon all societal customs, morals, laws, and sanctions to anarchic behavior? Will they party like there was no tomorrow? Will they pillage, rob, and murder (pointless as it may seem)? Or will they calmly accept their fate and perhaps gather together for the warmth and comfort loved ones can give in the ultimate final moments. Here F. L. Wallace offers another possibility, one you may not see coming. More I dare not say for fear of spoiling the answer.

“End as a World” saw print in the September 1955 issue of Galaxy. Its companion stories include the final part of four of the serialized novel Preferred Risk as by Edson McCann (pseudonym of Frederik Pohl and Lester del Rey), James Gunn’s novelette “Little Orphan Android,” Robert Sheckley’s short story “Hunting Problem,” Richard Matheson’s novelette “One for the Books,” and Robert Zacks’s (an unknown name to me) short story “The Freelancer.”

F. (Floyd) L. Wallace was not terribly prolific in genre, publishing two dozen stories from 1951-1961, and the 1955 novel Address: Centauri which was published by Gnome Press. Born in Rock Island, IL in 1915, along with his SF and mystery writing he worked as a mechanical engineer, living most of his life in California where he died in Tustin, CA in 2004.

(F. L. Wallace photo above right taken from his wikipedia page and is a scan from its original appearance in the May 1953 issue of Science-Fiction Plus, the scan giving the unfortunate checkered moire pattern. Galaxy cover above left is of the September 1955 issue.)

{After mom’s little rascals made it home sweaty and tired from a hard day’s play in the August heat, they reluctantly obeyed their mother and took a bath. Clean and cooled off, they found themselves stretched out on the living room rug in front of the radio listening to this episode of X Minus One. The next day would find them at the corner drugstore perusing the racks of their favorite SF magazines, a few choice selections of which are shown below. Astounding was still going strong with its monthly schedule, as was The Magazine of Fantasy & Science Fiction. Venture began as a bi-monthly and saw its first issue earlier in the year with its January 1957 issue. It would last for but ten issues and close shop in the middle of 1958. It would be revived briefly a decade later in 1969 but would again fold in 1970 after only six issues. Note that this issue of Venture sports, along with others, the name of Floyd Wallace on the cover. A happy coincidence. Also of interest is the gorgeous Kelly Freas Astounding cover, portraying a scene from Poul Anderson’s cover novelette “Brake,” which is one of the stories in the late SF Grandmaster’s Psychotechnic League future history. The story has been reprinted at least a dozen times in Psychotechnic League collections, the one I favor being the 1982 Jim Baen Presents edition from Tor titled Cold Victory.} 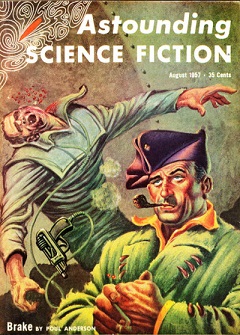 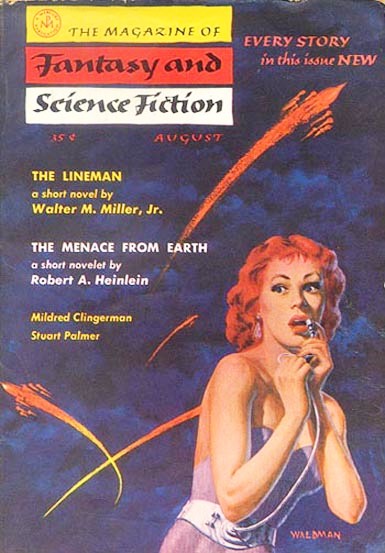 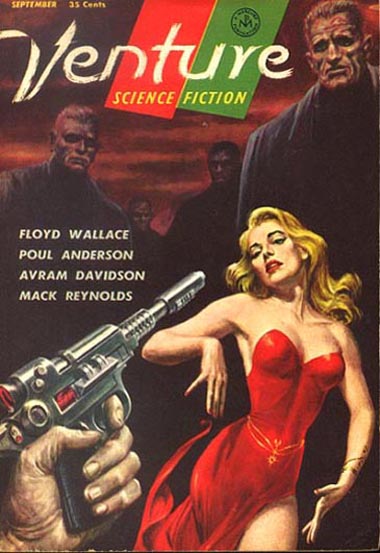