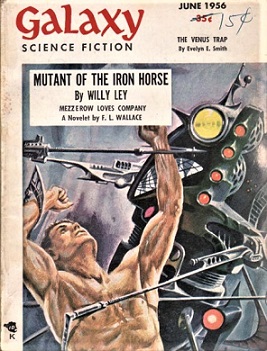 X Minus One (1955-58) aired “Death Wish” on October 10, 1957 as its 115th episode. Consensus among radio historians set the number of X Minus One episodes at 125, with 119 in circulation. “Death Wish” is a short story that first appeared in the June 1956 issue of Galaxy (cover at left) as by Ned Lang. Ned Lang was one of the handful of pseudonyms used by Robert Sheckley (1928-2005, photo at right taken at the 2001 Nebula Awards in Los Angeles, CA, where Sheckley was honored as SFWA’s newest Author Emeritus).

“Death Wish” is the sort of story one might reasonably expect to find in Astounding SF (now Analog), in that it involves a problem–in this case one of life and death–which a space crew must solve, correct, or overcome in order to survive. Sheckley’s take on the theme has a ship whose drive has gone wonky and is speeding it and its small crew out of our solar system at fantastic speed and with no hope of rescue. Frantic, the crew turns to what the ship carries, a new generation computer they hope can provide the solution leading to their possible salvation. A member of the crew distrusts computers, especially smart ones, believing they have no love for humanity. The discussion then turns to the hotly discussed question we continue to this day to debate with our 21st century super computers, and what might happen if they should become self-aware. Do we trust our machines to act in our interest, or their own? Listen now to “Death Wish” to see how Robert Sheckley shows one possible answer to this serious question.

{One of the neighborhood gang had a birthday on October 4th, less than a week before “Death Wish” aired. Adults were still buzzing about the news that the Russians had launched Sputnik I on October 4th and that the Space Age had begun. But our Birthday Boy and his fellow wannabe astronauts headed for the corner drugstore to buy their favorite SF pulp magazines, with Birthday Boy offering to buy sodas for everyone with some of his remaining birthday money. Astounding SF (1930-present, now Analog), was grabbed quickly as it always was. The Magazine of Fantasy and Science Fiction (1949-present) was by 1957 a solid hit and with covers like the one below was a favorite purchase. And Galaxy (1950-1980) had also proved a relatively new favorite and was now on their “must have” list. All three magazines published monthly in 1957. Looking at the covers below one finds a coincidental tie-in to “Death Wish,” Sheckley’s story of a thinking computer. The bottom left corner of the Astounding cover shows “Thinking Machine”–and the cover painting echoes this theme. And in the lower left corner of the Galaxy cover we see it has a new story by Sheckley. Perfect timing.} 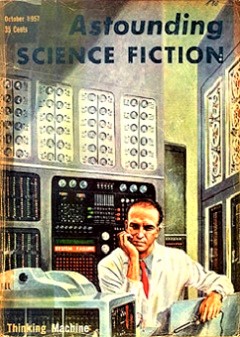 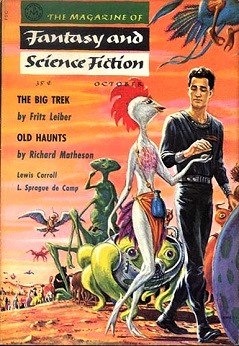 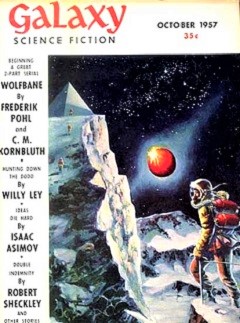