Noted for the stark realism in her work, it comes as small surprise then that Eliot’s novella ventures beyond realism and into one of the areas many were infatuated with during the Victorian Era—psychic phenomena, mesmerism, the supernatural, and odd pseudo-sciences like phrenology.

“The Lifted Veil” is also a stylistic departure for Eliot, for she uses an unreliable narrator in the character of Latimer, who, after a childhood illness, believes himself cursed, for he can read thoughts and foresee glimpses of the future (including his own death), and is appalled to discover otherwise ordinary people’s dark motives—not least of which are Bertha’s, his new wife and late brother’s fiancée. When Bertha’s maid is briefly resurrected from the dead she reveals Bertha’s plot to poison Latimer, which eventually comes to pass as foretold.

George Eliot is perhaps best known for a handful of novels including Silas Marner (1861) and Middlemarch (1871-72). She wrote but two stories shorter than novel length during her lifetime, and “The Lifted Veil” is one of them. That it ventures into the realms of telepathy, visions of the future, and resurrecting the dead is even more remarkable, and makes this supernatural/SF mystery all the more noteworthy, especially coming from such an unexpected source.

A fierce and wide ranging intelligence drove Eliot throughout her life (as a professed atheist, her well-known social life was deemed un-Christian), and “The Lifted Veil”—her single foray into what today we call science fiction—shows her imagination as unshackled by religious dogma or social convention as she did any other aspect of her life.

Weird Circle was produced and transcribed in the New York City studios of RCA with enough scripts for two seasons, each season comprised of 39 episodes, for a total of 78 shows. It was then licensed for syndication to NBC and the Mutual Broadcasting Network for use in their markets across the country and in Canada, to air at a time of each station’s choosing. Thus, it has been almost impossible to trace the very first-ever airing of any given episode (and many were re-aired into the 1950s). This particular episode aired from WGN in Chicago, one of the Mutual Broadcasting Network’s powerhouse stations.

{Still full of turkey, stuffing, green bean casserole, and mashed potatoes and gravy from the recent Thanksgiving celebration, the young pilgrims comprising the neighborhood gang got together for their ritual walk to the corner newsstand, there to enrich their minds with helpings of their favorite reading. Among the available magazines in November of 1943 were Astounding Science Fiction, which, as always, was a solid monthly. Thrilling Wonder Stories was being hit hard by the war. In 1940 it was monthly, in 1941 it was down to 8 issues, 1942 saw but 6 issues, and now in 1943 it would publish but 5 issues. Thrilling Detective (1931-53) was a monthly until, like many another pulp magazine, it ran into trouble during the war. Shortly after 1945 it went to a bi-monthly schedule which it maintained until its final two years.} 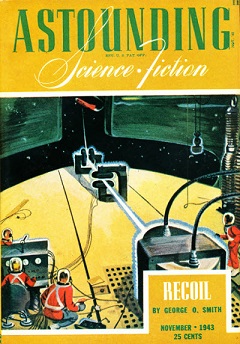 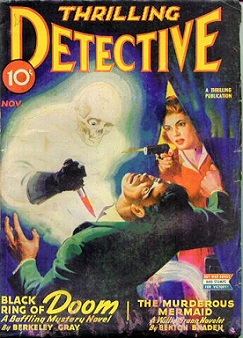