The Weird Circle (1943-45) aired “The Hand” on December 19, 1943 as the 17th of its 78 episodes. Weird Cicle was produced and transcribed in the New York City studios of RCA with enough scripts for two seasons. According to Golden Age Radio historian Karl Schadow: “There were a total of 78 episodes but these were produced in blocks of 13 after the initial group of 26 episodes. Thus, there were not two distinct 39-episode seasons [editor’s note: as some websites proclaim]. There were no ‘seasons’ for The Weird Circle as it was a transcribed series. It was licensed to individual sponsors, stations and ad agencies but not networks.” It was then licensed for syndication to markets across the country and in Canada, to air at a time of each station’s choosing. Thus, it has been almost impossible to trace the very first-ever airing of any given episode (and many were re-aired into the 1950s). This particular episode aired from WGN in Chicago, one of the Mutual Broadcasting System’s powerhouse stations. Weird Circle is considered a fine example of the paranormal and supernatural horror genres. Most of the radio scripts were adapted from the works of Poe, de Balzac, Wilkie Collins, Goethe, Hawthorne, Charlotte Bronte, Daniel DeFoe and many others.

“The Hand” is a short story by French author Guy de Maupassant (1850-1893, photo top right). It is a rewrite of his 1875 story “The Flayed Hand” (written under the pseudonym of Joseph Prunier) and was first published in the December 23, 1883 issue of the French magazine Le Gaulois. Taking place on the Mediterranean island of Corsica (located south of France and west of Italy), it tells the skin-crawling story of one Sir John Rowell, an Englishman, who enjoys showing visitors to his home his trophy room, especially a certain mummified hand chained to one of the room’s walls. He explains that it belonged to his worst enemy, and that it is still alive and as long as it remains so, so will he remain alive. Visitors scoff at his statement that the hand is still alive…until they see it begin to move, straining against the chain holding it to the wall. The story, mostly by brief hint and innuendo, slides in black magic and East Indian influences to help set the creepy atmosphere, and the fine acting brings it all home. A suitably scary tale well adapted to radio, “The Hand” is another of the many fine tales wrought by the troubled De Maupassant. In January of 1892 he tried to kill himself by cutting his throat and was institutionalized, where he died in July of the following year, presumably from the dementia/madness brought on by the syphilis he contracted as a youth.

{Having purchased all of their usual SF/F pulps for December in previous visits leading up to Christmas, the neighborhood gang nevertheless found themselves making one last trip to the corner newsstand after listening to “The Hand” in hopes of picking up any stragglers to keep them occupied a mere two days before Christmas. Famous Fantastic Mysteries (1939-53), while still delivering wild and woolly adventure stories and attracting some highly regarded writing talent (see William Hope Hodgson on the cover of the issue below), only managed 3 issues in 1943, a victim of the war-years paper shortage. After the war in 1945 until the end of its run in 1953 it was a solid bi-monthly. Jungle Stories (1938-54) was also good for improbable adventure tales of derring do and deadly monsters though in a different setting than on far planets or other worlds. Though almost the entirety of its 16-year run would show it as a quarterly, in 1943 (and only in 1943) it managed to publish 5 issues but then had to back off due to the paper shortage. Thrilling Wonder Stories (1939-55) had become a long-time favorite with many a popular author frequenting its pages, often showcasing stories blending SF and Fantasy elements set on and off Earth to great effect. In 1943 it was a quarterly.} 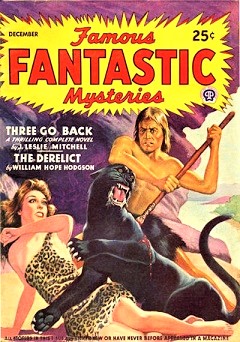 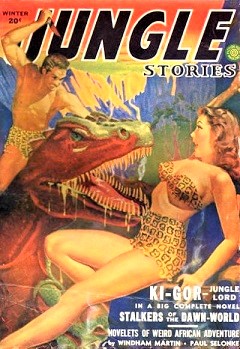 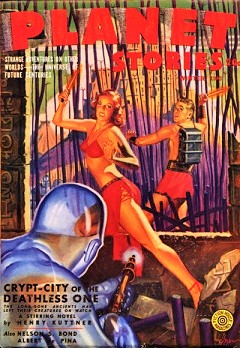