Weird Circle (1943-45) aired “The Feast of Redgauntlet” on January 15, 1944 as the 27th of its 78 episodes. Weird Cicle was produced and transcribed in the New York City studios of RCA with enough scripts for two seasons, each season comprised of 39 episodes, for a total of 78 shows. It was then licensed for syndication to NBC and the Mutual Broadcasting Network for use in their markets across the country and in Canada, to air at a time of each station’s choosing. Thus, it has been almost impossible to trace the very first-ever airing of any given episode (and many were re-aired into the 1950s). This particular episode aired from WGN in Chicago, one of the Mutual Broadcasting Network’s powerhouse stations. Weird Circle is considered a fine example of the paranormal and supernatural horror genres. Most of the radio scripts were adapted from the works of Poe, de Balzac, Wilkie Collins, Goethe, Hawthorne, Charlotte Bronte, Daniel DeFoe and many others.

Retitled for this radio dramatization from its original title of “Wandering Willie’s Tale,” “The Feast of Redgauntlet” is one of the side stories told in Sir Walter Scott’s (1771-1832) 1824 novel Redgauntlet. In essence, this story is about a cruel Scottish castle owner (Robert Redgauntlet) who is behind on his tribute to the one whom he serves due to political misfortune. He therefore puts the screws to those who rent land from him for their rent in order to pay his own debts. Those who do not or cannot pay are hanged. One such tenant is Steenie Steenson who has just witnessed a triple hanging, the bodies twisting in the wind while the gibbet upon which the corpses dangle creaks in a baleful rhythm. Steenie then spys a gaunt stranger in ill-fitting clothes on horseback who informs him that these are the Woods of the Dead, and because Steenie failed to speak out against the hangings he must take his bag of silver, divide it up between the families of the three dead men, and so atone for his silence. If he does not agree to pay the widows from his own pocket the stranger promises that he will never leave the woods alive. But Steenie’s bag of silver is all the money he has to pay Redgauntlet, so how will he come up with his own back rent and avoid his own death?

Steenie’s problem is an interesting one, and ere long and after a sore setback with the money a supernatural element comes into play, with an offer to visit a dead man who lies uneasy in his grave. There’s a twist or two, dark moments when he speaks with the dead, and unless you know the original tale beforehand you won’t see the entire resolution coming. It’s a pretty decent adaptation, especially given the 27 minute time frame and hews rather faithfully to the original story given the same constraints. The production values, sound effects, believable characters with their obvious Scottish dialect, and overarching sense of menace make this another fine effort from Weird Circle.

{Having stuffed their sponge-like minds on their regular diet of SF magazines while home from school during the Christmas holidays, the neighborhood gang still had a few nickels and dimes left over from generous gandparents so headed for the corner newsstand for more. Doc Savage ran from 1933-1949 and in 1944 was a monthly. Jungle Stories was popular and published regularly from 1938-1954. In 1944 it was a quarterly, and despite its generic title could have well been called the Ki-Gor Jungle Lord Magazine, for each issue ran Ki-Gor, Lord of the Jungle stories and many serialized Ki-Gor novels. With fast-paced adventure tales set in the unknown, unexplored depths of the jungle, with death lurking behind every tree, and with a half-clad beauty on almost every cover, no wonder this fun (but second-tier) Tarzan, Lord of the Jungle imitator had a profitable run of 16 years. The Shadow (1931-49) was still publishing regularly during WWII, surviving the paper shortage. It was a monthly in 1944.} 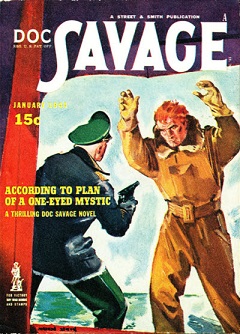 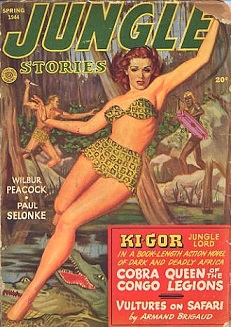 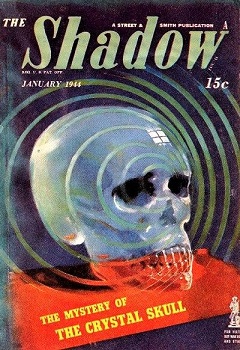