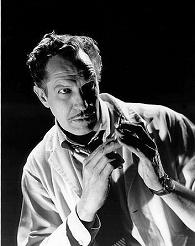 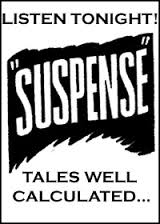 Suspense aired “Rave Notice” on June 1, 1958 as episode 753 of its nearly 1,000 episodes, the show spanning 20 years from 1942-62. As Halloween approaches we thought it high time to get in the mood, and what better way to chill the spine than with one of the masters of terror, Vincent Price. Here Price stars as an actor belittled by the director in a play in which he has a part. The enraged actor vows to kill the incompetent director–and does, in gruesome fashion. Certain to be sentenced to the electric chair for premeditated murder, this clever actor knows his only avenue to escape such a fate is to convince a psychiatrist he is unarguably insane. What befalls the actor as he plays the biggest, most important role of his life defines this tale of murder and madness gone wrong. Vincent Price wrings all the emotion he can muster out of this melodramatic role–that of a maniacal murderer, a second-rate actor out to save his own skin who went off the deep end because a two-bit director failed to give him a “Rave Notice.” 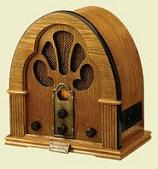 1958 was a bad year for the SF magazines, the booming paperback explosion taking its toll on the following publications:  Science Fiction Quarterly, Science Fiction Adventures, Imagination Science Fiction, Space Travel, and Infinity Science Fiction. 1958 also saw the SF field lose two of its brightest lights to early deaths: C. M. Kornbluth and Henry Kuttner. On the bright side–for fans of horror movies–1958 saw the first issue of what would be the most popular genre film magazine in history, Famous Monsters of Filmland #1, appearing in April of 1958. Conceived by publisher James Warren and editor Forrest J Ackerman as a one-shot, the issue sold out quickly and went scurrying to the printer for a second run. It began full-time publication in 1959 with four issues and the rest is history. Below is the cover to that famous first issue (and now very expensive collector’s item). 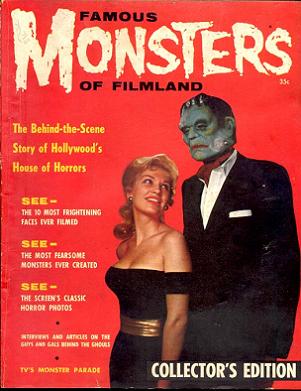 As prelude to this episode of Suspense, we present a rare treat: a 1971 interview with Vincent Price (1911-1993) wherein he talks about his early career before film and radio, the 350 lectures he’s given on his annual tours, his love of Art in all of its forms, his view that television is failing to live up to its potential, and much more. While the interviewer attempts to get Price to speak on this subject or that, notice how Price comes right out and says he would really like to talk about his love for Old Time Radio, which he does. And we thank him for that.

Turner Classic Movies (TCM) has declared October Vincent Price month, so get ready to enjoy more of the master’s great performances as he chills and thrills youngsters and oldsters alike.

(For the Halloween season I wanted to showcase some old EC horror comics covers from 1958, but to my dismay discovered that all of them closed shop in late 1954 due to the advent of the Comics Code Authority’s restrictions brought about by the insidious efforts of one Dr. Fredric Wertham and the bruhaha he made to congress about comics seducing the youth of America, which led to strict censorship on what could and couldn’t be published in the comics. So for 1958 we have no covers from Tales from the Crypt, The Haunt of Fear, and The Vault of Horror. Weird Tales would also close shop in September of 1954, not returning to publication until 1973. Therefore, we showcase below a trio of the more mainstream SF magazines from June of 1958, which faithful readers were perusing while not listening to Vincent Price and “Rave Notice.”) 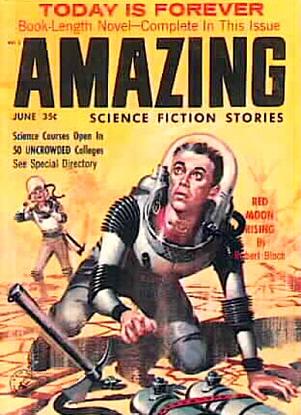 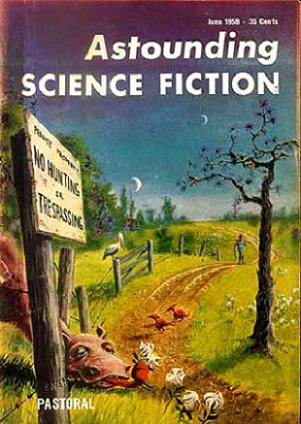 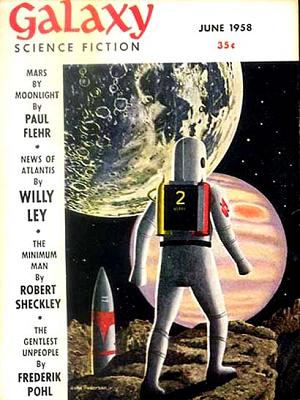