Theater 5 (August 3, 1964-July 28, 1965) aired  “Deedle Deedle Dumpling, My Son X-1” on November 13, 1964 as the 75th of its 260 episodes. Although radio historians have marked the end of the Golden Age of Radio with the demise of Suspense in September of 1962, following its lengthy 20-year run, not all AM radio magically disappeared. Thus, we have shows like ABC’s Theater 5 making a case for a mini-revival of dramatic radio in 1964 with its eclectic spectrum of dramas. Airing Monday through Friday (as opposed to most shows airing once a week) at 5 PM, on any given day anyone tuning into this New York syndicated program might hear from any of the following genres: ghost, horror, supernatural, suspense, fantasy, action-adventure, social, crime, science fiction or space age, topical, mystery, melodrama, psychological, or human inerest dramas (with even some comedy thrown in from time to time).

One notable difference from virtually all Golden Age radio shows was its shortened length, shows running only from around 17-21 minutes rather than the classic 30. This placed an extra burden on even the most gifted and experienced script writers, and in some cases an infodump was the only reliable answer to the clipped format. Nevertheless, many of the shows were quite decent, with seasoned actors and professional production values garnering high marks throughout the countsry. The only qualm I have is that the music doesn’t seem to fit the “feel” of many of the episodes I’ve listened to, and sounds like it was heavily influenced from some of the jazz influenced introductory music from some of the early 1960s television detective shows (think Peter Gunn, as one website had it, and I think rightly).

On the plus side, Theater 5 had one of the greatest radio (and later for TV for that matter) voices of all time as its host and announcer–Fred Foy (1921-2010, photo top right). Foy was most famous and now fondly remembered for his opening for both The Lone Ranger on radio (1948-54) and then television (in syndication and for the years 1955-57), and no one who has ever listened to or seen even a single episode of this iconic western can ever forget Foy’s voice, or the opening words:

“Hi-Yo, Silver! A fiery horse with the speed of light, a cloud of dust and a hearty “Hi-Yo Silver”… The Lone Ranger! With his faithful Indian companion, Tonto, the daring and resourceful masked rider of the plains led the fight for law and order in the early Western United States. Nowhere in the pages of history can one find a greater champion of justice. Return with us now to those thrilling days of yesteryear. From out of the past come the thundering hoof-beats of the great horse Silver. The Lone Ranger rides again!”

As Foy’s wikipedia page characterizes this opening (very slightly shortened for television): “Most radio historians agree that Foy’s Lone Ranger introduction is the most recognized opening in American radio.” Theater 5 was fortunate indeed to have Foy as the show’s announcer. He passed away on December 22, 2010 of natural causes.

As for “Deedle Deedle Dumpling, My Son X-1,” it is the story of a father who believes his son has been invaded–taken over from the inside–by teeny tiny aliens; aliens who are changing him from a flesh and blood Earthling to a being of metal and gears, all as part of a plot to overtake the Earth. Is he crazy or does he see something only a father could spot from knowing his son so well? The son has been checked out by every conceivable medical and psychological metric and found to be normal, so why does the father persist in his obvious delusions? While somewhat dated at this point in time (and even for 1964 given the state of science fiction at that time), the drama still remains a fun and interesting little conceit. And while you might want to give up on it as it nears its conclusion (and after one of those interminable infodumps mentioned above), fearing you’ve heard it all before, go ahead and stick with it until the very end and the son’s final lines. It’s a classic ending that has worked successfully time and time again, and even now, 55 years later for certain types of stories. Enjoy.

{This episode of Theater 5 aired a scant nine days before the first anniversary of the assassination of President John F. Kennedy on November 22, 1963. While America was still adjusting to now President Lyndon Johnson as its new leader, everyday routines continued more or less as usual for both adults and children. So it was no surprise that the neighborhood gang could be found at the local newsstand, this one now expanded to include a soda fountain along one whole side, with red plastic-topped swivel stools enough to seat the gang with a few left over. Before visiting the fountain and ordering either a plain, cherry, chocolate, or vanilla coke, they scattered along the opposite wall to decide on their SF magazine selections. Analog (Astounding SF from 1930 through January 1960, and then slowly transitioned to Analog (Science Fiction and Fact) beginning with the February 1960 issue and completing the title change in October of 1960), was always on someone’s “A” list, and with stories like H. Beam Piper’s cover story for the issue below it was little wonder. In 1964 Analog was a monthly. F&SF (1949 to present) was enjoying immense popularity and an enthusiastic readership in 1964, drawing on many of the top names in the field and was winning some of the field’s awards Poul Anderson would win the short fiction Hugo for his June 1963 story “No Truce With Kings,” and Ed Emshwiller–cover artist on the issue below–would win the 1963 Hugo for Best Artist; and coincidentally, this issue would be Avram Davidson’s final issue as editor, and was replaced for the December 1964 issue by Joseph Ferman, the magazine’s publisher, though son Ed Ferman would do the actual editing).  F&SF was also a monthly in 1964. Galaxy (1950-80) had also found its voice and enthusiastic audience by 1964 and also drew some of the field’s best talent to fill its pages. From 1961-69 Fred Pohl became the second of the magazine’s 7 editors, having been passed the helm from original editor Horace Gold. These would be (arguably) the magazine’s most fruitful years, creatively speaking, as witness the names on the cover below: Gordon Dickson’s classic Dorsai novel Soldier, Ask Not, as well as stories by Frank Herbert, Miriam Allen DeFord, and Pohl himself. What an issue that was! Galaxy was a bi-monthly in 1964.} 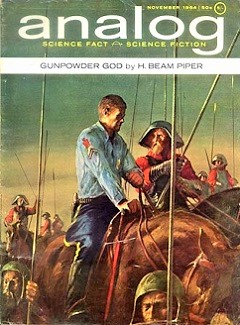 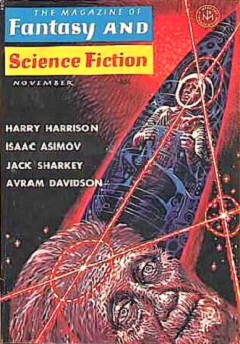 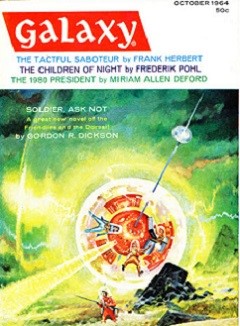