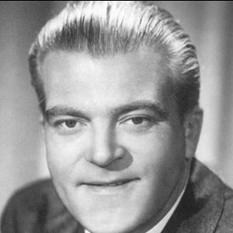 The Whistler (1942-55) aired “Career Man” on October 8, 1947 as the 281st of its 760+ (depending on how one counts) episodes. It is only the fourth episode of the show we have run, the past three coming two years ago in 2017 and the last in September of that year. For newcomers, introductory background material on the show is reprised below (it was the most popular west coast radio show for many years), with the background providing context for its not unique but unusual narrative format.

“Career Man” tells the story of a desperate man attempting to save his career after he believes he has killed a man. Due to the circumstances surrounding the man’s death, our man decides to cover up his actions and allows guilt and paranoia to decide his future course of action, which of course leads to one horrible misstep after another. And one panic-fueled episode where the truth of the old adage* “..when first we practice to deceive…” proves its wisdom for one pathetic “Career Man.”

*The line “What a tangled web we weave, when first we practice to deceive,” first appeared in Sir Walter Scott’s 1808 historical romance (written in verse) Marmion: A Tale of Flodden Field. 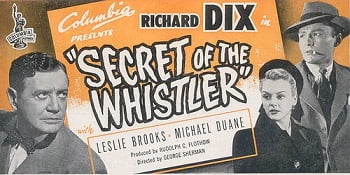 {October of 1947 found the neighborhood gang reading their favorite SF magazines while not listening to their favorite college or professional football games on the radio. Astounding (1930-present, now Analog) was always at the top of someone’s list, even with a more realistic cover like this one that featured (as the cover blurb indicated) Mercury in transit through the Sun’s orbit. Astounding was a monthly in 1947. Crack Detective (1938-57) would survive through no fewer than 8 title changes in its almost 20-year run. From 1943-49 it sported the title below, and in 1947 was a bi-monthly. Popular Detective (1934-53) was a hardy staple and maintained a relatively high level of fiction throughout its nearly 20-year existence. Of note in the issue below is the name of Sam Merwin, Jr. on the cover. Sam Merwin, Jr. (1910-1996) is more well known in SF circles than perhaps in the detective genre, though he penned more mystery fiction at short and novel lengths than he did science fiction. He also wrote romance stories under the pen name Elizabeth Deare Bennett. As for his SF credits (though he would write 70+ short stories and several novels), he is best known for editing Startling Stories and Thrilling Wonder Stories (1945-51), Fantastic Story Quarterly and Wonder Stories Annual (1950-51), Fantastic Universe (1953), and was an associate editor of Galaxy (1952-53). Popular Detective was a bi-monthly in 1947.] 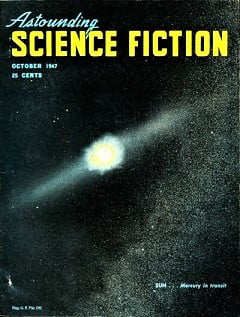 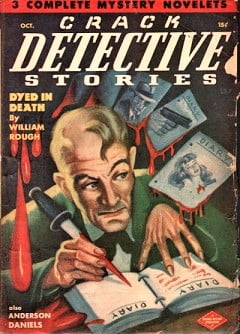 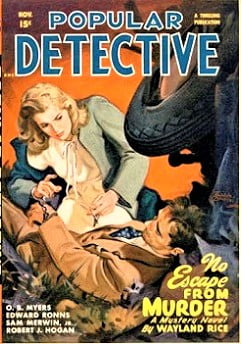