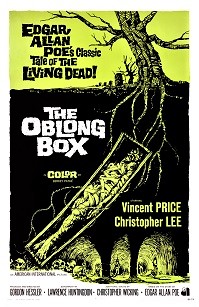 The Weird Circle (1943-45) aired “The Oblong Box” on February 18th, 1945 as the 64th of its 78 episodes. Weird Circle was produced and transcribed in the New York City studios of RCA with enough scripts for two seasons. According to Golden Age Radio historian Karl Schadow: “There were a total of 78 episodes but these were produced in blocks of 13 after the initial group of 26 episodes. Thus, there were not two distinct 39-episode seasons [editor’s note: as some websites proclaim]. There were no ‘seasons’ for The Weird Circle as it was a transcribed series. It was licensed to individual sponsors, stations and ad agencies but not networks.” It was then licensed for syndication to markets across the country and in Canada, to air at a time of each station’s choosing. Thus, it has been almost impossible to trace the very first-ever airing of any given episode (and many were re-aired into the 1950s). This particular episode aired from WGN in Chicago, one of the Mutual Broadcasting System’s powerhouse stations. The Weird Circle is considered a fine example of the paranormal and supernatural horror genres. Most of the radio scripts were adapted from the works of Poe, de Balzac, Wilkie Collins, Goethe, Hawthorne, Charlotte Bronte, Daniel DeFoe and others of like stature.

This is the 12th episode of The Weird Circle we have showcased since March of 2014, the last coming in October of 2019, two years ago.

“The Oblong Box” first appeared as a short story by Edgar Allan Poe (1809-1849, pictured top right) in the August 8, 1844 issue of the Dollar Newspaper, and then shortly thereafter in the September 1844 issue of Godey’s Magazine and Lady’s Book. The story is told for the most part in flashback by an unnamed narrator who runs into an old college friend during an ocean voyage up the eastern coast from South Carolina to New York. The friend has paid for three staterooms rather than two (one for himself and his wife—who the narrator believes is highly unattractive and not at all the beauty she is purported to be—and one for his two sisters), an oblong box being placed in the third cabin, the narrator assuming it might be for extra baggage. There is a hurricane during the voyage and the ship is lost, passengers escaping in lifeboats. The last anyone sees of our narrator’s friend he is lashed and clinging to the oblong box before they are swept beneath the waves. The answers to questions about the friend and the oblong box with which he is obviously obsessed are made clear much later when they are found washed up, and provide the deranged, morbid aspects to the tale…which shall not be revealed here.

This radio adaptation strays somewhat from the print version while leaving the basic storyline intact, so I give a thumbs up to this credible adaptation. The story was also made into a 1969 film starring Vincent Price and Christopher Lee (their first film together), but the only similarity to the original story and the radio adaptation, alas, is the title.

{“The Oblong Box” aired on a Sunday evening in early October of 1945, leaving dark thoughts in the minds of those of its audience’s younger listeners. Nevertheless, these thoughts were not dark enough to dissuade the neighborhood gang from meeting the next afternoon after school at the corner newsstand in search of more macabre tales, especially those featuring murder, corpses, and graveyards. Black Mask (1920-51) was one of, if not the most prestigious of the detective pulps, having published many now classic stories and iconic characters, including Dashiell Hammett’s novel The Maltese Falcon (serialized in the September 1929–January 1930 issues). It was a bi-monthly in 1945. Dime Detective (1931-53) kept its readers turning pages for more than 20 years with reliable, rewarding fare, attracting authors (like many pulps were able to do) from other genres. Known to dark fantasy and supernatural fans is the name of E. Hoffman Price (1898–1988), whose name can be seen squeezed in at the very bottom of the cover shown below. Dime Detective was a monthly in 1945. Ten Detective Aces (1928-49), began as a pulp focusing on gangster and organized crime stories, but soon moved away from what had become wearisome for its perceived audience, such stories having begun to run their course in print and film, to the kind of story centered more on traditional detective fiction. So, after two early title changes (The Dragnet Magazine & Detective-Dragnet Magazine) and then a change in format, its final title became, beginning with the March 1933 issue, Ten Detective Aces. It was a bi-monthly in 1945.} 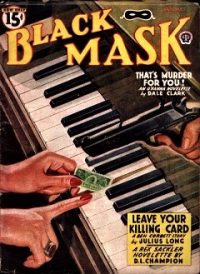 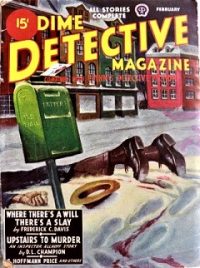 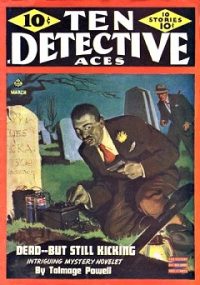 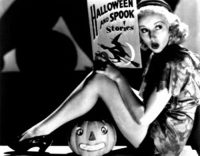