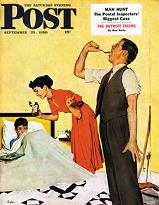 Ray Bradbury’s “The Veldt” was first published in the September 23, 1950 issue of The Saturday Evening Post under the title “The World the Children Made” (cover at right). Its most famous reprinting, of course, comes as the first of eighteen stories comprising Bradbury’s classic The Illustrated Man (1951). This story ages so well it’s almost scary in its intended, or unintended, prescience. I will say as little as possible about this story, for those of you familiar with it need no synopsis, and those coming to it for the first time will want to experience it as untarnished as possible by any expectation provided by such a synopsis. I will say that the story works on several levels, from that of the technology involved to that of the insight into child psychology. “The Veldt” is an amazing story–a true classic in every sense. I note briefly that the print story’s ending is perfect, and that while the radio version has a short addendum to the original ending (as well as an opening scene which differs from the original and serves as bookend to the new ending), it is not nearly so strong as the original, detracting greatly from Bradbury’s final disturbing image. Bradbury ended his story where it should have ended, and that’s that. A reasonable assumption is that the original ending was indeed too disturbing for the tender sensibilities of X Minus One‘s younger audience and was therefore softened, the brutal sting removed (as well as possible outcries from parents).

1950 was a tremendous year for short science fiction. While Bradbury was publishing “The Veldt” in The Saturday Evening Post and “There Will Come Soft Rains’ in the May issue of Collier’s, the genre magazines were having a heyday with Cordwainer Smith’s “Scanners Live in Vain” (Fantasy Book, June), Damon Knight’s “Not With a Bang” (The Magazine of Fantasy & Science Fiction, Winter), C.M. Kornbluth’s “The Little Black Bag” (Astounding SF, July), Alfred Bester’s “Oddy and Id” (Astounding SF, August), Frtiz Leiber’s “Coming Attraction” (Galaxy SF, November), and among many others Richard Matheson’s first SF story “Born of Man and Woman” from the Summer issue of The Magazine of Fantasy & Science Fiction.

This is the fourth Bradbury radio adaptation showcased here, and the numbers do not lie. Each time one appears the hit count rises appreciably above the norm, and it’s easy to see why. Do enjoy this enduring Ray Bradbury classic, aptly (re)titled “The Veldt.” X Minus One aired it as its 12th episode on August 4, 1955.