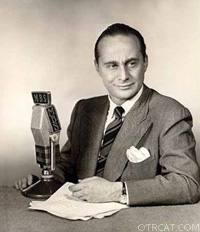 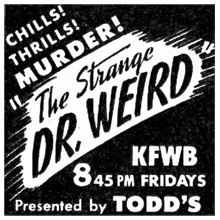 “Good evening. Come in, won’t you? Why, what’s the matter? You seem a bit nervous.”

The Strange Dr. Weird (1944-45) aired “Revenge from the Grave” on May 22, 1945 as its 29th and final episode. The show ran from November of 1944 through May of 1945 (though historical accounts are not settled on this point) in short 15-minute episodes (a few minutes less without commercials), and was dubbed by some as a poor man’s Mysterious Traveler. Indeed, there are similarities between the shows, though MT had a much longer run of nine years (1943-52) and was a full half-hour program. Maurice Tarplin (photo at right, 1911-1975) was the host/narrator for both shows, and both of the writers for MT, David P. Kogan (photo lower left, 1916-2009) and Robert A. Arthur (photo lower right, 1909-1969), also penned the scripts for The Strange Dr. Weird. While MT‘s shows included tales of mystery and suspense along with SF and the supernatural, The Strange Dr. Weird concentrated mostly on the supernatural. Both shows opened with the narrator setting the stage with a tease for what was to follow, but where MT stories were told in conversation while on a train and ended with the narrator beginning another story only to stop when the unnamed passenger to whom the story was being told 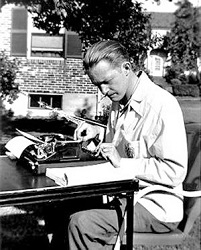 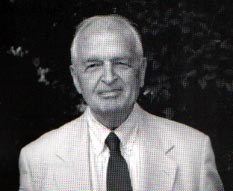 had to get off, The Strange Dr. Weird ends with a variation on the same gimmick, the narrator beginning a story just as his “guest” has to leave. As you might imagine, with actual story lengths running to around a scant 12 minutes, there’s not much room for characterization or extraneous detail, so only the essentials are conveyed–the idea or dilemma takes center stage and remains front and center. And there is always an unexpected twist at the end, more often than not providing the moral comeuppance knife in the heart for the bad guy or evil doer. Short and to the creepy point, there’s no lavish musical score or expensive production values here, the quintessential organ riffs manipulating and accentuating listener emotion at the proper moments in conjunction with the plights of the actors.

“Revenge from the Grave” might not appear as the most original title of all time, and indeed it isn’t, but the story details and circumstances are what make this little tale worthwhile. It’s an imaginative twist on the cliche storyline of some one or some thing coming back from the dead, and I think the writer was forced to jump through too many hoops to make it happen as it did. By which I mean that too many things had to happen just right and it got to the point at the end where the explanation just seemd a bit too improbable for my skeptical mind (and stretched my suspension of disbelief to the breaking point). Don’t get me wrong, it’s still a fun back-from-the-dead story, because we always want to know how it’s pulled off:  is it really some one or some thing come back from the grave, or is there a more mundane explanation for the strange goings on? For this one (and I have no idea how Kogan and Arthur collaborated, what their method was), I had fun imagining that one of them sent the basic improbable story outline to the other one, with a note saying something to the effect of, “Okay, here you go. Now you figure out how to make the ending work!” Which left his partner having to pull rabbits out of his hat to make it all work. And looking now at the photos of Kogan and Arthur, I note that Kogan is smiling and Arthur is typing. One can only imagine how Arthur might have returned the favor with some wild future script outline for Kogan to finish.

“Perhaps you’ll drop in on me again soon?
I’m always home. Just look for the house on
the other side of the cemetery…the house of Dr. Weird!”

{Having already purchased their SF magazines for May, a return trip to the corner newsstand offered other favorites (finances permitting). Doc Savage (1933-49) was always a good bet for exciting adventure tales and with a sinister message of foreboding etched in stone for Doc, this issue was a sure buy. It was a monthly in 1945. Jungle Stories (1938-54) continued its long-running practice of including the further adventures of the ever-popular Ki-Gor, and the scantily clad female gracing the cover didn’t hurt, either. Jungle Stories was a quarterly in 1945. Thrilling Detective (1931-53) held adventure of a darker variety, and spotting the name of SF author Fredric Brown on the cover was all it took for a quick sale. Noted in SF circles for his expertise at the short-short length (though he would write some well received longer works including a few novels), this issue of Thrilling Detective showcased a full-length novel, Compliments of a Fiend. Five years later Dutton & Co. would publish it as a hardcover, where it found a larger but just as receptive audience, as it dealt with characters featured in several other of Brown’s works, two former carney employees (Ed Hunter and uncle Am–short for Ambrose) now turned private detectives. It also dealt with the supernatural (astrology and Charles Fort), which spiced up the storyline even more. Thrilling Detective was a monthly for most of 1945, but with its November issue went bi-monthly.] 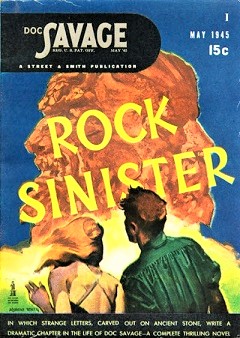 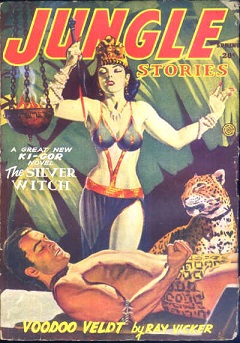 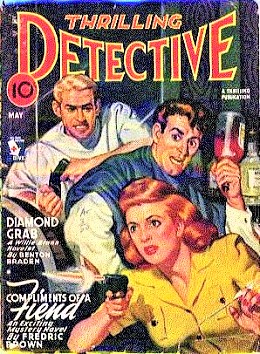