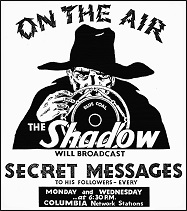 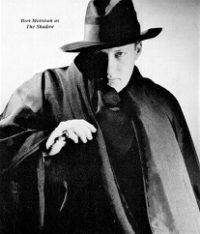 Who knows what evil lurks in the hearts of men?

The Shadow (1937-1954) aired “The White Witchmen of Lawaiki” on May 5, 1946.  Though only about 300 episodes are known to still exist out of over 800 (depending on how one counts), the number is subject to change as new episodes are unearthed from time to time. This is the first episode we have featured since November of 2020 out of some two dozen overall, and I felt it was time for another, for The Shadow has proven quite popular with Golden Age radio fans, and especially fans of the Shadow in both radio and magazine formats.

The following is an abridged account of the character’s radio and magazine history for those coming to The Shadow for the first time. Long-time listeners may have forgotten some of the details, so if you are among them, refresh your memories or take a moment to grab your favorite beverage of choice before listening to this episode. The Shadow debuted on radio on September 26, 1937 and delighted fans for more than seventeen years, closing shop on December 26, 1954. The radio show began its long run on the Mutual Broadcasting Network on Sunday evenings and was sponsored by Blue Coal. From its inception until just past its first year (Sept., 1937-Sept., 1938) the voice of the young 22-year-old Orson Welles (1915-1985) would be heard as that of the Shadow, and Agnes Moorehead (1900-1974, photo at left) would play the role of “the lovely Margot Lane,” his “faithful companion” and aide. Following Welles’s departure (“Professor X” was his final episode) Bill Johnstone became the Shadow for the September 25th, 1938 episode, at the beginning of Season Two. Johnstone (1908-1996) was then succeeded by Bret Morrison (1912-1978, photo top right), who, in two stints (1943-44 & 1945-54), was radio’s the Shadow for ten of its seventeen years (though others besides these three mainstays would ascend to the role). Moorehead would also exit the show (in 1940) to follow Welles after he formed his Mercury Theater on the Air, as well as appear in several of the young genius’s classic films. For this week’s OTR episode starring Bret Morrison as the Shadow, Lesley Woods (1910-2003) plays the part of Margot Lane.

As for “The White Witchmen of Lawaiki,” we find ourselves at one of the more exotic locales in the history of the Shadow’s adventures. It begins with Lamont and Margot answering a written message to meet an old acquaintance, someone they do not remember. The old acquaintance turns out to be a mad man who holds the Shadow responsible for his ten year confinement in an insane asylum, and who now wants revenge for the supposed injustice. The story the mad man recounts takes Lamont and Margot (and us) back in time to a remote island crawling with the living dead and a sacrifice to be made to the gods of an active volcano. It’s a creepy skin-crawler where death at the hands of the living dead (who only come out at night to roam) might be the lesser of two evils. So settle back and get ready to enjoy this tension-filled romp on an unmarked island with hordes of the living dead, a hungry volcano waiting for sacrifices, and last but not least with the Shadow and Margot caught in the middle with time running out as death closes in on them. What’s not to like?

{This episode of The Shadow was broadcast on a Sunday evening, which meant as soon as school let out the next afternoon the neighborhood gang headed for the nearby newsstand for more tales of exotic adventure, danger, and titillating thrills. Adventure (1910-1971), as we noted last week, was founded in direct response to Argosy, the early pulp magazine selling in the hundreds of thousands per issue and whose fiction ran the spectrum from danger to romance. Adventure followed the same general formula but narrowed its focus to stories of danger and thrills, which proved highly successful. It was a monthly in 1946. fantastic Adventures (1939-53), so its history goes, was founded by editor Raymond A. Palmer (RAP) as a companion to science fiction’s first magazine, Amazing Stories. It offered, at first, lighter fare than its older sibling publication, but ere long it ran pretty much the same sort of story though of a more fantastic nature. It managed 5 issues in 1946, but from 1948 until its demise in 1953 was a solid monthly. The Shadow (1931-49) was still quite popular after the war ended in 1945, and the magazine’s print face coincided nicely with the weekly radio features, sometimes dovetailing perfectly. So eager Shadow fans could listen to the Shadow and Margot on the radio having adventures on lost islands teeming with the living dead one evening, and the next day be reading another Shadow adventure featuring the Egyptian god Thoth, who, among his many attributes was worshipped as the god of magic. The Shadow was a monthly in 1946.] 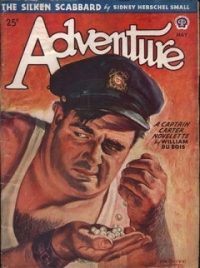 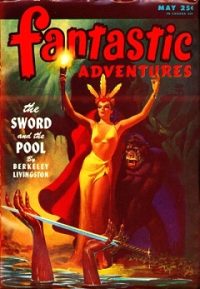 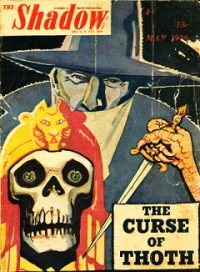