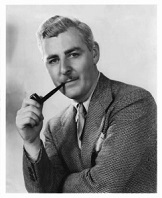 The Shadow (1937-1954) aired “The Stockings Were Hung” on Christmas Eve, December 24, 1939, as its 179th episode. Though we have run around 30 The Shadow episodes over the years, it was a surprise to see that only two were offered this year (March and August), so felt it was time to give Shadow fans another fix. And what better time than during the holiday season with the following Christmas story. For newcomers to the Shadow in general and to the radio program in particular, I reprise some of the interesting history recounted in previous episodes (but not all of it this time).

The Shadow debuted on radio on September 26, 1937 and delighted fans for more than seventeen years, closing shop on December 26, 1954. The radio show began its long run on the Mutual Broadcasting Network on Sunday evenings and was sponsored by Blue Coal. From its inception until just past its first year (Sept., 1937-Oct., 1938) the voice of the young 22-year-old Orson Welles (1915-1985) would be heard as that of The Shadow, and Agnes Moorehead (1900-1974) would play the role of “the lovely Margot Lane,” his “faithful companion” and aide. Following Welles’s departure Bill Johnstone became The Shadow. Johnstone (1908-1996, photo top right) was then succeeded by Bret Morrison (1912-1978), who, in two stints (1943-44 & 1945-54), was radio’s The Shadow for ten of its seventeen years (though others besides these three mainstays would ascend to the role). Moorehead would also exit the show (in 1940) to follow Welles after he formed his Mercury Theater on the Air, as well as appear in several of the young genius’s classic films.

So listen now to the Shadow (as Lamont Cranston) and Margot Lane as they attempt to reunite a young brother and sister with their missing father, who it is soon suspected might be the victim of foul play involving the father’s business interests. And yes, it is a loose reworking of Dickens’s “A Christmas Carol,” with the Shadow nicely worked into the story as analog to one of the ghosts of Christmas from the original tale. It is a feel good story fitting for the spirit of the holiday and evokes the standard but welcome and reassuring values we honor as being inherent in each person, though at times we need to be reminded of them.

(Parental Advisory: Please note that this episode of The Shadow is Rated P, for Puppy. If you have small children in the house who have been begging mommy or daddy for a puppy, it is strongly suggested they not listen to this episode. It contains a puppy spied in a store window that ends up as a Christmas present. So unless you want the “I want a puppy!” pleas to continue and want to risk finding yourself at the local pet store or animal shelter over the holidays, it is strongly advised that you not allow your lovable little rug rats within earshot of this episode. Merry Christmas.)

{Christmas Eve morning found the neghborhood angels heading for the corner newsstand before it closed early. They knew the radio had promised an episode of The Shadow for later in the day, so the latest issue was on their must-have short list. The Shadow magazine (1931-49) went to two issues a month in late 1932 and would retain this bi-weekly schedule well into early 1943, at which time it became a monthly through 1946, then tapered off until its demise in 1949. A sure bet for action and adventure, Doc Savage (1933-49) caught the eye of the kid who had just moved in at the end of the block and had quickly become a new favorite of the neighborhood gang. It was a solid monthly in 1939. And an old favorite, Weird Tales (1923-54) could hardly be passed up–especially not with the creepy cover below (as any kid will tell you, any magazine with a skeleton on the cover–with or without clothes–was a must buy). The “unique magazine” was also a monthly in 1939.) 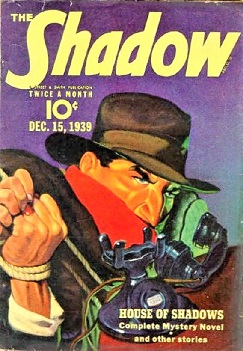 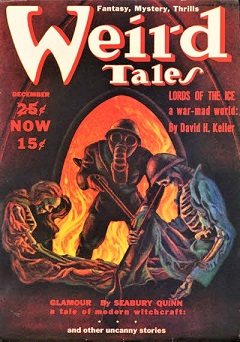