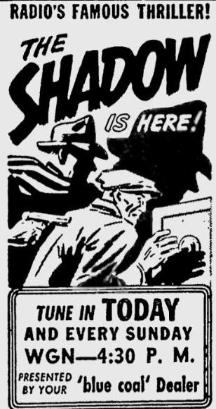 The Shadow (1937-1954) aired “Fountain of Death” on November 27, 1938 as its 62nd episode of approximately 690. Though only about 275 are known to still exist, the number is subject to change as new episodes are unearthed from time to time. This is the first episode we have featured since April of this year (as our 500th posting) and only the second since July of 2018, and I felt it was time for another, for The Shadow has proven quite popular with Golden Age radio fans, and especially fans of the Shadow in both radio and magazine formats.

The Shadow debuted on radio on September 26, 1937 and delighted fans for more than seventeen years, closing shop on December 26, 1954. The radio show began its long run on the Mutual Broadcasting Network on Sunday evenings and was sponsored by Blue Coal. From its inception until just past its first year (Sept., 1937-Oct., 1938) the voice of the young 22-year-old Orson Welles (1915-1985, photo at right) would be heard as that of the Shadow, and Agnes Moorehead (1900-1974, photo at left) would play the role of “the lovely Margot Lane,” his “faithful companion” and aide. Following Welles’s departure Bill Johnstone became the Shadow in September of 1938, at the beginning of Season Two. Johnstone (1908-1996, photo top right) was then succeeded by Bret Morrison (1912-1978), who, in two stints (1943-44 & 1945-54), was radio’s the Shadow for ten of its seventeen years (though others besides these three mainstays would ascend to the role). Moorehead would also exit the show (in 1940) to follow Welles after he formed his Mercury Theater on the Air, as well as appear in several of the young genius’s classic films.

“Fountain of Death” is of course a play on the Fountain of Youth, which phrase represents in the abstract Man’s never-ending search for immortality. Here, a female scientist seems to have found an anti-ageing serum that simultaneously returns the old to their youth while keeping the young, young. But once the word gets out there are those who would stop at nothing–including murder–to learn the secret for their own power-mad purposes. Enter the Shadow, as he must thwart a megalomaniac whose intentions (not revealed here) are of truly world-wide proportions. Even in the right hands and for worthy purposes and with the best of intentions, the ages-old questions remain:  Is Mankind ready for the gift of immortality should it somehow become available to all? And who controls such life-altering scientific breahthroughs as a general proposition–the individual or individuals who discovered them (if they don’t work for a corporation) or the State–or a country you’ve left? Mull these timeless questions over as you listen to this intense early episode of The Shadow, where immortality turns soon enough into a “Fountain of Death.”

[Remember that less than a year after this episode of The Shadow aired, in September of 1939 to be precise, another megalomaniac who was given the title of Chancellor of Germany in 1933, then Fuhrer in 1934, and whose dream included a Third Reich that would last a thousand years, would invade Poland and begin World War II. This fuhrer’s dream of the almost immortal reign of his imagined Third Reich would come to a crashing halt less than 6 years later, when he would commit suicide on April 30, 1945, a similar method of death–purely coincidental–as that of the megalomaniac in “Fountain of Death.” I wonder if the author of this episode had this leader in mind when he sat down to pen this story and whose end he envisoned might have been wishful thinking. If so, then he got his wish, but by a strange turn of fate it became more, for on April 30, 1945 it also entered the realm of prophecy, did it not?]

{“Fountain of Death” aired on a Sunday, three days after Thanksgiving in 1938. Tired of leftover turkey, the neighborhood gang wanted nothing more than to get away from turkey sandwiches, so found themselves lurking at the corner newsstand the following Monday, ready to feed their minds now that their tummy’s were full. Astounding Science-Fiction (1930-present, now Analog) was always a favorite and with a stunning image of Jupiter on the cover of this issue, it kindled a Sense of Wonder like few images could (and illustrated the cover story “Reunion on Ganymede” by Clifford D. Simak). Astounding was a monthly in 1938. The Shadow (1931-49) seemd an appropriate choice after listening to “Fountain of Death,” with the Shadow fresh in their minds. It published twice a month until mid-1943, cut back to a monthly for a few years, then went bi-monthly for almost two years, only to end its respectable run as a quarterly with its Summer 1949 issue. The venerable Weird Tales (1923-54) was in fine form in 1938 (witness the names of H. P. Lovecraft and Seabury Quinn featured on the cover below). It would remain a monthly until 1940 then go to a bi-monthly schedule until its final issue.} 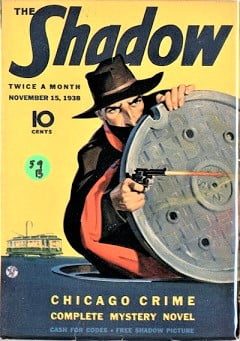 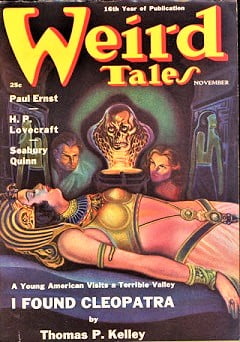