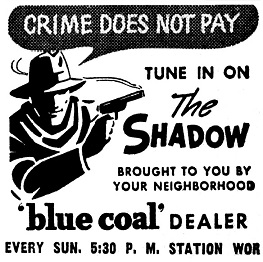 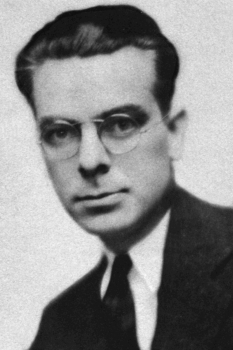 The Shadow (1937-1954) aired “Death Has Eight Arms” on November 2, 1947 as the 8th episode of its 14th radio season (radio seasons, like TV seasons today, being shorter than a full calendar year). We have run a fair number of The Shadow episodes over the past seven years, but for new listeners we now repeat the fascinating history of this long-lived character, followed by a brief introduction to this particular episode.

The history of the Shadow character is long and storied. A bare bones synopsis begins on July 3, 1930 when the narrator of magazine publisher Street & Smith’s radio version of its pulp magazine, Detective Story Magazine, was given the name of the Shadow. This mysterious voice who merely introduced and narrated the radio show, but was not a character in any of the episodes, became so popular after it was taken over by Frank Readick, Jr. and his spooky, phantom laugh that on April 1, 1931 The Shadow magazine was born. It ran for 325 issues, 282 of them written by Walter B. Gibson (1897-1985, photo top right) under the house name of Maxwell Grant.

The Shadow debuted on radio on September 26, 1937 and delighted fans for more than seventeen years, closing shop on December 26, 1954. The radio show began its long run on the Mutual Broadcasting Network on Sunday evenings and was sponsored by Blue Coal. From its inception until just past its first year (Sept., 1937-Oct., 1938) the voice of the young 22-year-old Orson Welles (1915-1985) would be heard as that of the Shadow, and Agnes Moorehead (1900-1974) would play the role of “the lovely Margot Lane,” his “faithful companion” and aide. Following Welles’s departure Bill Johnstone became the Shadow. Johnstone was then succeeded by Bret Morrison, who, in two stints, was radio’s the Shadow for ten of its seventeen years (though others besides these three mainstays would ascend to the role). Moorehead would also exit the show (in 1940) to follow Welles after he formed his Mercury Theater on the Air, as well as appear in several of the young genius’s classic films.

However, the major change between the magazine and radio versions–and that which would throw longtime fans into a furor of complaint and outrage in the letter column of the magazine–occurred when Margot Lane was introduced in the very first radio episode as the Shadow’s companion, love-interest, and aide. For you see, since the magazine’s inception in 1931 there had never been a female companion/aide for the Shadow. Margo Lane was not introduced into the pages of the magazine until 1941, four years after her debut on the first radio episode. There is also a definite difference in the level of intimacy depicted between Margo/Allard (the magazine) and Margot/Cranston (radio). The later magazine relationship was less romantic and decidedly more platonic than that of the radio episodes, which were, in any case, almost as pure as the wind-driven snow by today’s standards. Perhaps this distancing of the “romantic” interest in the magazine was to assuage longtime readers outraged at Lane’s insertion into the radio episodes in the first place, and then later in “their” magazine years later. (In short, longtime readers resented the new addition to the radio episodes and then the magazine, while those coming to the radio version first, and liking the interplay between Margot and Cranston, wanted to see her in the magazine as well.) Whatever the reason, the radio relationship was originally conceived and patterned on that of the highly popular Thin Man movies of the time, starring William Powell and Myrna Loy as Nick and Nora Charles.

Another major difference between the magazine and radio versions was adopted because of the medium of radio itself. Realizing that it could become difficult to keep more than a few characters separate by voice only, we do not find the print version’s large supporting cast who clandestinely aide the Shadow in his crime-fighting adventures.

The opening lines of every Shadow episode are some of the most famous in the world: Who knows what evil lurks in the hearts of men? The Shadow knows! Not quite so well-remembered, however, but just as iconic among Shadow fans is the cautionary tag-line, directed especially at children: The weed of crime bears bitter fruit. Crime does not pay. The Shadow knows!

The (radio) Shadow is without superpowers in the traditional sense, relying only on his intellect and his strange power to “cloud men’s minds” so that they cannot see him. This “magical” ability was learned while visiting various lands in the Orient. The Shadow is a super-sleuth, a dark crime-fighter whose secret identity is his greatest weapon in fighting crime and injustice of all kinds. Unfortunately, his methods are ofttimes not strictly inside the letter of the law, and thus he is regarded as a criminal by the police–the very people he is trying to help. The character of The Shadow has been acknowledged and verified as, without question, the inspiration and prototype for several notable fictional characters, the most popular of which is none other than Batman.

As Anthony Tollin, the foremost expert on The Shadow writes, “There are about 250-275 Shadow shows in circulation, out of around 690 broadcast during the Lamont Cranston era. There is only a single surviving show from the last six seasons, after the shift from electrical transcription discs to audio tape.” The final six seasons of The Shadow (seasons 13-18) cover the latter half of 1949 (season 13, which began in September) to 1954 (season 18, which ended in December), and that single surviving episode from those years is “The Vengeance of Angela Nolan” from June 27, 1954, chronologically the very last known to exist. It was unearthed by none other than Anthony Tollin.

Of The Shadow‘s first season, September 26, 1937 to March 20, 1938, there were twenty-six episodes. Only fifteen remain in existence, eleven having been lost, including episodes 2-4. 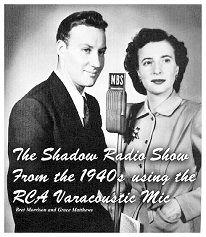 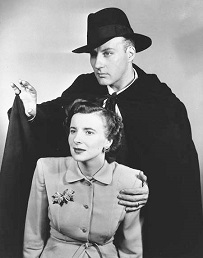 “Death Has Eight Arms” has its beginnings in Burma (which became an independent, democratic nation in 1948, the year following this episode, but was taken over in a coup in 1962 and became a military dictatorship. In 1989 the military government, despite protests, renamed the country Myanmar, which name it retains to this day). Buddhism being the predominant religion, the country is replete with many temples to honor its many gods, one of which is Gaia, goddess of Life and Death. Someone has stolen a valuable paper housed in the temple of Gaia, and as any self-respecting god or goddess is known to do, a curse has been placed on the thief. Back in the United States, one of those connected to the theft has been murdered and the Shadow is soon involved. Just what is this stolen “paper,” what makes it valuable enough to have the curse of death placed on it, and how further murders can be stopped are not simple tasks for the Shadow to answer and leads to an intriguing story. So listen now to “Death Has Eight Arms,” with Bret Morrison (1912-1978) as the Shadow and Grace Matthews (1910-1995) as Margot Lane. Blue Coal is the long time sponsor, and at this point in the show’s long career it was airing from its flagship station from 5-5:30 early on Sunday evenings.

“The weed of crime bears bitter fruit. Crime does not pay.” –The Shadow

{Early November of 1947 found the neighborhood gang–fresh off the sugar high from Halloween and after listening to this episode of The Shadow–heading for their favorite home away from home, the corner newsstand, where they would spend hours leafing through many of their favorite pulp magazines and finally choosing several to take home as new found treaures. As always, Astounding was a must buy, and as expected it hewed to its solid monthly schedule in 1947. This issue of Shadow Mystery was picked up because of the radio episode’s influence, but the magazine had become a pale shadow of its former self and would be the last any of the neighborhood group would buy. In 1947 the magazine managed only 7 of its usual 12 issues and had changed its name from The Shadow to Shadow Mystery in the hope of resurrecting sales. The experimental name change lasted but 10 issues before it returned to its more recognizable name in the fall of 1948, but the damage had been done. The Shadow magazine would last only 4 issues after returning to its original title and would see its final issue in the Summer of 1949, ending its successful 48-year run. 1947 saw Startling Stories returning to its usual bi-monthly schedule following several years of hit-and-miss publication due to the war.} 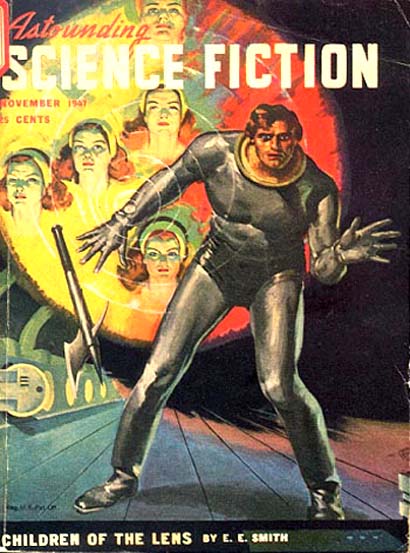 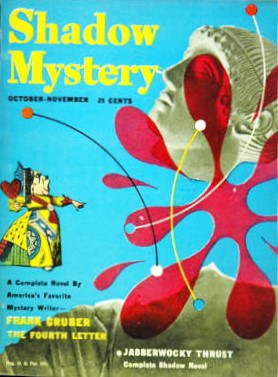