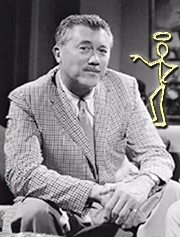 The Saint (1945, 1947-51) aired “The Frightened Author” on July 23, 1950. We have run only three previous episodes of this fine show, the last being on June 3, 2017. For new listeners I now borrow freely from that show’s opening remarks as they deal with the creator and partial history of The Saint on radio, in print, and on film. It is estimated there were in the neighborhood of 157 unique episodes (depending on which historian you talk to) of which approximately 57 are in circulation.

Crime and mystery novelist Leslie Charteris’ (photo at right, 1907-1993) famous detective Simon Templar was dubbed The Saint by the underworld, though he was hardly what the monicker implied. The story goes that he came by the name because of his initials, S. T..  The Saint, as a radio show (there were movies, tv shows, novels, and even comic books), ran first in 1945, and then from 1947-1951, with almost all episodes featuring the incomparable Vincent Price (photo lower right, 1911-1993).

On American radio, however, Vincent Price was the undisputed, one and only Simon Templar, the Saint. His velvety voice and witty banter engendered the proto-typical suave, bon vivant hero/detective, though in a number of episodes the sexual innuendos written for not only his lines, but those of other characters were a bit too risque and obvious for the perceived audience in the late 1940s, though The Saint‘s legion of fans didn’t seem to care.

In “The Frightened Author” Simon Templar must solve a series of murders that copy those described in a friend’s novel. This gimmick has been used many times over the years, but this one has a twist that was new (at least to me). It also expertly drops hints along the way that lead the listener to speculate that any one of several persons could be the murderer. See if you can spot the red herrings and guess the murderer’s identity as the Saint steps in to aid “The Frightened Author.”

{In the mood to read more soft-boiled detective stories after listening to this week’s episode but hard-pressed to find any, the neighborhood would-be gumshoes decided to stick with SF/F fare or more hard-bitten detective pulps. The Avon Fantasy Reader (1947-52) ran classic stories by many of the greats from past decades. It had no set schedule and ended up publishing 18 issues. 1947 saw 5 issues, from 1948-51 it ran three issues per year, and in its final year it published but one. The issue below is #13. Famous Detective (1938-57) featured action-packed, down and dirty pot boilers. It had an erratic schedule, mostly bi-monthly for a few years and then quarterly for it last few years. It ran but 5 issues in 1950. Super-Detective (1940-50) also showed an erratic schedule from year to year (anywhere from 2 to 9 issues in any given year), had gone through many name changes and types of fiction to stay alive, and saw 6 issues in 1950. The one below was its next to last. It’s also a puzzle as to what audience they were aiming at with rather more adult covers like the one shown here, but going for youngsters who liked their comic strips as well; note the “Comic Section” banner running across the top of the magazine title.} 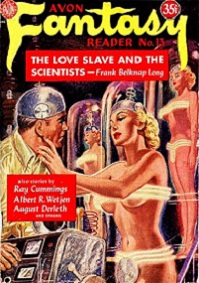 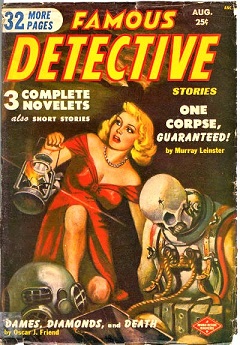 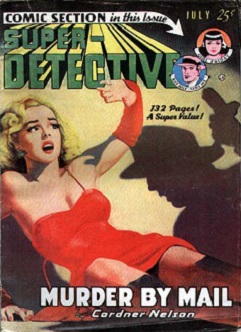