The Saint (1945, 1947-51) aired “Greed Causes Murder” on October 29, 1947 as its 43rd episode. We have run only four previous episodes of this fine show, the last being in March of 2018, just over a year and a half ago. For new listeners I now borrow freely from that show’s opening remarks as they deal with the creator and partial history of The Saint on radio, in print, and on film. It is estimated there were in the neighborhood of 157 unique episodes (depending on which historian you talk to) of which approximately 57 are in circulation.

Crime and mystery novelist Leslie Charteris’ (photo at right, 1907-1993) famous detective Simon Templar was dubbed The Saint by the underworld, though he was hardly what the monicker implied. The story goes that he came by the name because of his initials, S. T..  The Saint, as a radio show (there were movies, tv shows, novels, and even comic books), ran first in 1945, and then from 1947-1951, with almost all episodes featuring the incomparable Vincent Price (photo lower right, 1911-1993).

On American radio, however, Vincent Price was the undisputed, one and only Simon Templar, the Saint. His velvety voice and witty banter engendered the proto-typical suave, bon vivant hero/detective, though in a number of episodes the sexual innuendos written for not only his lines, but those of other characters were a bit too risque and obvious for the perceived audience in the late 1940s, though The Saint‘s legion of fans didn’t seem to care.

This episode turns on the puzzle of why a petty crook seeks to steal a decrepit jalopy from an old man when a more valuable vehicle would be more to his financial advantage when fenced for resale. Several corpses provide grim testimony that the price of involvement in shady doings is high as Vincent Price is witness to the fact that “Greed Causes Murder.”

{Two days before Halloween of 1947 found the neighborhood ghouls and goblins at their home away from home, the corner newsstand in search of dark deeds in some of their favorite detective pulps. Street & Smith’s Detective Story Magazine (1915-53) was one of the first, most stable and long-running of all detective magazines. In 1947 it was a monthly. Dime Deective Magazine (1931-53) proved another reliable magazine which attracted, from time to time, some of the most popular talent in the field. It too was a monthly in 1947. New Detective (1941-55), a relative newcomer in the field, sought to publish new, exciting fare but the contents ran to mostly police detective stories whch still managed to attract enough of an audience to manage a decent run of 14 years. It was a bi-monthly in 1947.  Fast-paced, no holds barred, page-turning crime fiction was the order of the day for all three magazines.] 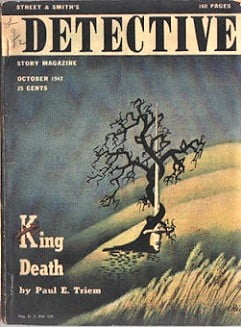 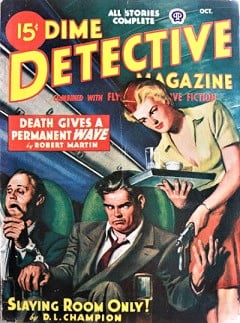 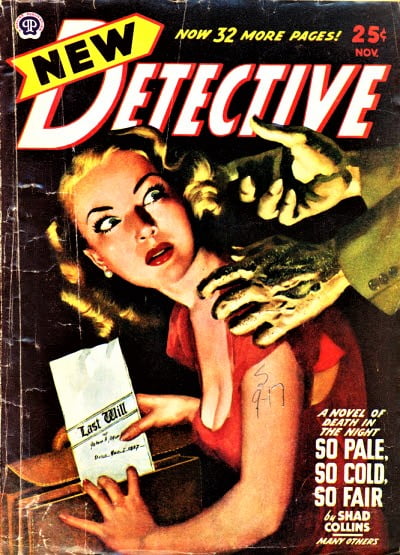