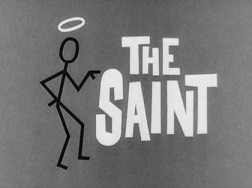 The Saint (1945, 1947-51) aired “Follow the Leader” on July 16, 1950. We have run only two previous episodes of this fine show, the last being on Christmas Eve 2016. For new listeners I now crib from that show’s opening remarks, partially because they mentioned Roger Moore (October 14, 1927-May 23, 2017), who played the Saint on British television for several years before being picked up here in the United States for a short run. Sadly, Moore passed away recently, and though most well known for his long stint as James Bond in a number of that franchises films, he first became well known for his tv role as the Saint. So without further ado, here is that previous background material on The Saint.

Crime and mystery novelist Leslie Charteris’ (1907-1993) famous detective Simon Templar was dubbed The Saint by the underworld, though he was hardly what the monicker implied. The story goes that he came by the name because of his initials, S. T..  The Saint, as a radio show (there were movies, tv shows, novels, and even comic books), ran first in 1945, and then from 1947-1951, with almost all episodes featuring the incomparable Vincent Price.

On American radio, however, Vincent Price was the undisputed, one and only Simon Templar, the Saint. His velvety voice and witty banter engendered the proto-typical suave, bon vivant hero/detective, though in a number of episodes the sexual innuendos written for not only his lines, but those of other characters, and were a bit too obvious for the perceived audience in the late 1940s, though The Saint‘s legion of fans didn’t seem to care.

“Follow the Leader” has Simon Templar getting somehow involved with a beautiful woman and Nazi spies (is there any other combination?). There’s Something Important everyone is after, it’s hard to tell who’s on whose side, and it’s all a very serious affair of who hid the McGuffin. Saying more would spoil it all, so I will leave the twists and turns for you to discover, as it’s a very deadly game of “Follow the Leader” with Vincent Price, as always, offering up a fine performance as the Saint.

{Being the impressionable young souls that they were, after listening to the Saint thwart criminal spies the neighborhood gang headed for the corner drugstore for a fix of more mayhem, murder, and detective derring do. Black Mask (1920-57), one of the most iconic and revered pulp detective magazines of all time, was a bi-monthly in 1950. Thrilling Detective (1931-53) had a great run, holding steadfastly to a strong monthly schedule before and during World War II, dropping to a bi-monthly schedule only after the war and until its demise. The lone hardcore SF pulp fan of the gang wasn’t swayed by this episode of The Saint and went instead for one of his favorites, choosing this issue of Thrilling Wonder Stories (1936-55) mainly because of two recognizable names on the cover, Henry Kuttner and Jack Vance. TWS was also a bi-monthly in 1950.} 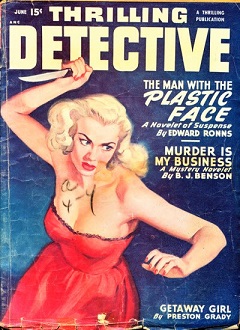 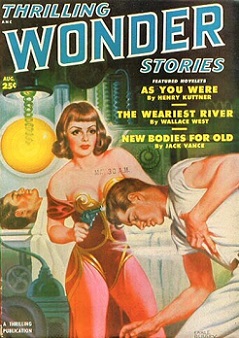