“The Plot to Overthrow Christmas” first aired on December 25, 1938. It was written by the legendary Norman Corwin and is told entirely in rhyming verse. It is a veritable tour de force in its dark, rather ghastly depiction of demons, devils, and nefarious historical figures assigned to Hell who plot to destroy one of Christianity’s holiest celebrations. It was Corwin’s first original play on network radio after CBS hired him in 1938, and ran as the first episode of Norman Corwin’s Words Without Music.

Norman Corwin–along with Arch Oboler and Orson Welles–was, in the 1930’s and 1940’s, one of old time radio’s most respected figures. Like Oboler and Welles, Corwin wrote, produced, and directed in many genres, most notably history, fantasy, drama, and biography, often infusing his work with a social conscience. His work has influenced the likes of Rod Serling, Gene Roddenberry, and J. Michael  Straczynski. Among his numerous awards, Corwin has been honored with a Golden Globe, an Emmy, and two Peabody Medals. He was voted into the Radio Hall of Fame in 1993, and a Short Feature documentary on his life (A Note of Triumph: The Golden Age of Norman Corwin) won an Oscar in 2006.

Ray Bradbury has acknowledged that Corwin was responsible for the eventual publication of The Martian Chronicles, and has said of Corwin that he is  “…the greatest director, the greatest writer and the greatest producer in the history of radio.” And the late film director Robert Altman forthrightly proclaimed that “Norman Corwin was my idol.”

Listening to the clever, witty, rhyming throughout “The Plot to Overthrow Christmas,” one immediately thinks of the work of Theodor Seuss Geisel (Dr. Seuss: 1904-1991).  Seuss, born in 1904 and six years’ Corwin’s senior, published and illustrated his first children’s book in 1937 (And to Think That I Saw It on Mulberry Street), a mere year before Corwin’s own entirely rhymed classic hit the airwaves. Seuss was born in Springfield, Massachusetts, and Corwin in Boston. Seuss was 33 when “Mulberry” saw print, and Corwin was 28 when he wrote “Plot.” While both Seuss and Corwin would go on to produce timeless works–and in their own fields the term genius is equally apt–one can’t help but wonder if Corwin was influenced by Seuss, his home-state contemporary whose just-published first work, it is reasonable to assume, he had opportunity to read.

Norman Lewis Corwin (May 3, 1910-    ) pictured above in 1941, is still active writing for radio and various publications, and remains listed as a writer in residence at the Journalism School at the University of Southern California.

To tempt with but a taste of what you will hear, and given the political activism of some regarding Christmas today and what they perceive as the separation of church and state, here are a few lines from “The Plot to Overthrow Christmas,” where those assembled in Hell offer their ideas on how to get rid of Christmas. I find the following wry bit of observation somehow eerily prescient: 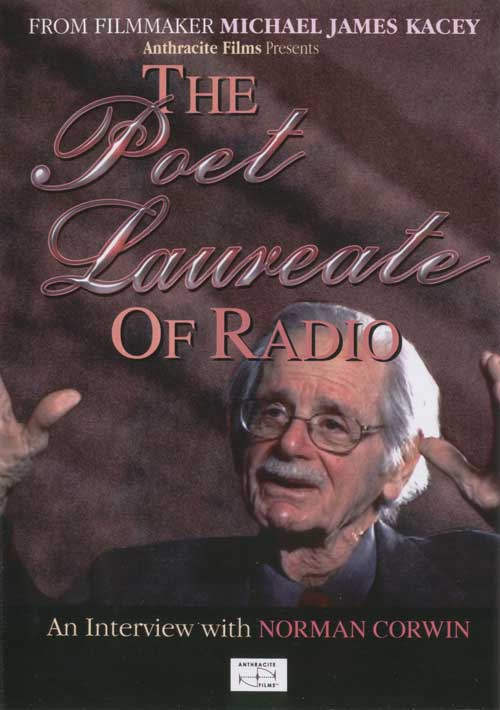 I think Mr. Nero’s made a wrong guess,
Now the way to go about it is to get in Congress.

Bribe a bunch of senators who know their oats,
And just make a practice of a bloc of votes.

And then they can legislate a situation,
Where they’ll rule old Christmas right out of the nation.

They can all get together and pass a law,
Where they ain’t gonna be no Christmas no more!

Norman Corwin’s homepage, full of fascinating information, wisdom, accolades from famous actors, writers, directors, news personalities, and historical factoids, can be found here. I urge you to visit this wonderful website and introduce yourself–if you haven’t already–to the works of a truly American “treasure.” A measure of the influence Norman Corwin has had over his lengthy and distinguished career can be found in the hour-long radio broadcast from December 15, 1941, eight days following the bombing of Pearl Harbor. Titled “We Hold these Truths,” it was commissioned by President Franklin Delano Roosevelt. From the Norman Corwin website: 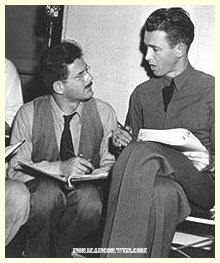 “Commissioned by FDR to commemorate the 150th anniversary of the Bill of Rights, this hour-long program was aired over the combined national networks (CBS, NBC Red, NBC Blue, and Mutual) eight days after Pearl Harbor. The Crosley Rating Service estimated 63 million people listened, half the US population at the time, and this was the largest audience in recorded history for a dramatic performance.”

Pictured here is Corwin discussing “We Hold These Truths” with actor James Stewart, 1941.

Herewith, the CBS radio network’s December 19, 1944 re-dramatization of Norman Corwin’s classic “The Plot to Overthrow Christmas.” Corwin returns to produce and direct, as do most of the original cast to reprise their roles from the original 1938 production–including Will Geer (who would later star on tv’s The Waltons.)