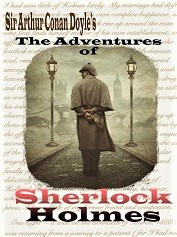 The New Adventures of Sherlock Holmes (1939-47) aired “The Adventure of the Submarine Caves” on March 4, 1946 as its 205th episode. During this incarnation of Sherlock Holmes on radio (the first coming in the early 1930s and the last running to 1959), Basil Rathbone and Nigel Bruce reprised their Universal studio film roles of Sherlock Holmes and Dr. Watson for close to 220 episodes. Afraid of being typecast–and following the cancellation of further Holmes films–Rathbone wanted out of his radio role. Though the show’s sponsor at the time, Petri Wines, offered him a generous bump in compensation if he would continue, Rathbone declined. Following his final episode as Holmes at the end of May 1946, the Holmes character was played by popular British actor Tom Conway (who was superb), with Bruce staying on until the series end in 1947. For several years during this series (including this episode), scripts were written by the team of future F&SF co-founder Anthony Boucher, and Denis Green. Boucher, a diehard Holmes fan, would pen the outlines of scripts and Green would supply the details. They worked well together and the show flourished.

Since 130 years have passed since the first story of Sherlock Holmes and Dr. John Watson appeared in Beeton’s Christmas Annual magazine for December 1887 (A Study in Scarlet), much has been written, filmed, or dramatized of the most famous slueth on the planet. In fact, the Wikipedia page devoted to Holmes, states that the Guinness Book of World Records’ lists the Holmes character as “the ‘most portrayed movie character in history’ with more than 70 actors playing the part in over 200 films.” And while hardly all inclusive, Wikipedia notes that those writing Holmes pastiches number the likes of Anthony Burgess, Neil Gaiman, Dorothy B. Hughes, Stephen King, Tanith Lee, A. A. Milne, and P. G. Wodehouse–to which I will add Manly Wade Wellman, Philip Jose Farmer, James Lovegrove, George Mann, Kim Newman, and Fred Saberhagen. It’s a sure bet there have been many others of genre interest over the years who have tried their hand at a Sherlock Holmes novel as well.

Our last Sherlock Holmes episode was in February of 2017, so I felt it was high time we revisited Watson and Holmes again. This time, Watson recounts the story of “The Submarine Caves,” and how he and Holmes foiled a Nazi plot to bring down the British Empire. It takes place in a small, virtually unnoticed little island in the English Channel and a well-hidden cave used by smugglers from years gone by, and a ceremony with a pound of butter at its heart as a perfect cover for Holmes. There’s a little spy/Nazi vs. spy/Holmes chicanery to spice up the soup, and while the ending is a little over-the-top (aren’t fanatics always a little melodramatic?), it is a solid Holmes adventure with its inspiration coming from one of Conan Doyle’s original Holmes tales.

{After listening to this Sherlock Holmes adventure in March of 1946 the neighborhood gang couldn’t wait to hit the corner newsstand to see which crime or detective pulps might whet their whistles. The Phantom Detective (1933-53) starred a masked detective fighting crime and from past issues our young crimefighters knew it would be a solid buy. In 1946 it published but five issues, though two years before and following 1946 it was a bi-monthly. Speed Detective (1934-47) was another of the rowdy, rock’em-sock’em detective pulps and past experience told the gang the bad guys were in for a rough time. In 1946, like The Phantom Detective, it would see only five issues published and the issue below would be its 5th to last, the magazine folding in February of 1947. Super-Detective (1934-50) rounded out the trifecta of detective derring-do magazines with its quickly pounded-out stories by many a pulp writer (notice that Roger Torrey held pride of place with cover stories on both Speed– and Super-Detective). In 1946 Super-Detective was bi-monthly.} 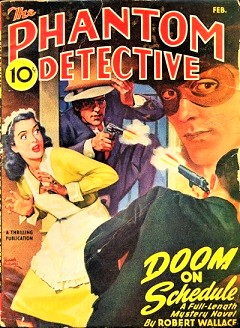 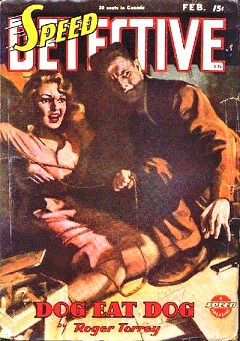 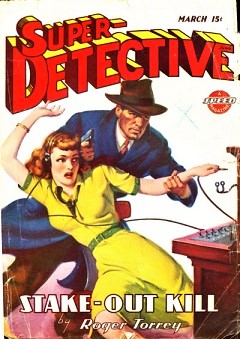