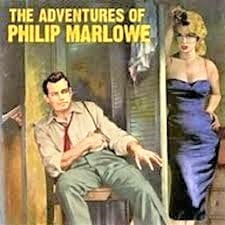 The Adventures of Philip Marlowe (1948-51) aired “The Ebony Link” on May 28, 1949 as the 35th of its 114 episodes. The original brief run starring Van Heflin debuted as a summer replacement for The Bob Hope Show from June 17, 1947 – September 19, 1947. For various reasons it didn’t wow audiences, or the creator of the character himself, Raymond Chandler, and so was cancelled, only to be retooled with a new actor as Marlowe (the incomparable Gerald Mohr, 1914-1968, photo top right) and new scripts (and with New in the title).

Mohr was a ubiquitous figure in radio and later in television. Just a few of his more than 500 radio appearances as star or supporting character include:  Jungle Jim, Archie Goodwin on The New Adventures of Nero Wolfe, The Whistler, The Shadow of Fu Manchu, Box 13, Escape, and many others. Beginning in the 1950s, Mohr appeared in more than 100 TV series during his life, among them:  Maverick, The Lawman, Cheyenne, Sugarfoot, Bonanza, The Rifleman, and other Westerns. Non-western TV appearances included but were not limited to:  Perry Mason, 77 Sunset Strip, Hawaiian Eye, and of SF interest episodes of Lost in Space and Voyage to the Bottom of the Sea. Of interest to comic books fans, Mohr did the voice of Reed Richards in The Fantastic Four animated cartoon series in 1967, and that of Green Lantern in the animated Aquaman series in 1968.

Conversant in Swedish, Mohr had flown to Stockholm in the Fall of 1968 to star in the pilot of a proposed television series. Shortly after filming he dropped dead of a heart attack on November 9th, 1968 at the age of 54. He was buried on the island of Lidingo, Sweden. 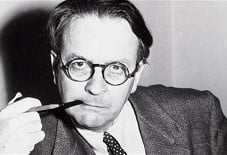 Raymond Chandler (1888-1959, photo at right) wasn’t the first to create what would come to be known as the hard-boiled detective. Dashiell Hammett was first on the scene with his Sam Spade character introduced in his 1930 novel The Maltese Falcon (first serialized beginning in the September 1929 issue of Black Mask magazine). But with Chandler’s first novel, The Big Sleep, published in 1939, he took the gritty, noir detective novel to a new level with his tough as nails private eye, Philip Marlowe. (It should be noted here that the screenplay for the classic 1946 version of the film was co-scripted by William Faulkner, Jules Furthman, and none other than SF’s own Leigh Brackett. It starred Humphrey Bogart as Marlowe and his new real life wife Lauren Bacall as Vivian Rutledge.) Marlowe’s character was not only able to handle himself on the street, he was an intellectual cut above the average gumshoe in that he had attended college, played chess, and had an ear for classical music. This side of his character only masked his off the cuff ability to fling witty descriptions and ready-made similes to pepper his 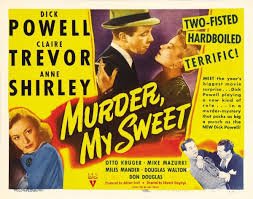 already colorful narratives, and was to become one of his trademarks, emulated by many another writer who wished to show how clever their own detective creations were. It became a widely recognized form of dialogue that later transferred itself well to the silver screen, custom made for audiences eager for the noir crime/detective experience, and was given full voice in the movie adaptation of Chandler’s 1940 novel Farewell, My Lovely. Released in 1944 under the novel’s original title in the UK, for American audiences the title was changed to Murder, My Sweet and starred Dick Powell and Claire Trevor. It was a well-received, seminal film that helped define the noir genre, and was a breakthrough role for Powell as well, who had spent a good decade or more playing the young, handsome, crooning playboy roles but never the serious leading man.

As for “The Ebony Link,” it began as many a Philip Marlowe radio adventure did, with a dramatic tease introducing the crucial elements of the episode, and which in this case just about says all you need to know. So without further ado, enjoy “The Ebony Link” and the tantalizing introduction to this Philip Marlowe mystery:

“It was ugly from the start this time.
Vicious blackmail that mushroomed into murder and all because a wild artist on a
hilltop, a man in a wheelchair and a redhead manicurist were held too tight together
…by one small Ebony Link!”

{Spring of 1949 found the neighborhood Private Eyes tracking down their favorite mystery and detective pulps at their nearby newsstand. They cornered and brought to justice some of the likely suspects below. Black Mask (1920-1951) was perhaps the most respected detective pulp of them all, and has certainly taken on iconic status as time has gone on, publishing, among other classic stories over its long history, Dashiell Hammett’s The Maltese Falcon. It was a bi-monthly in 1949. Dime Mystery Magazine (1932-1950) also held sway over a faithful audience for nearly two decades by infusing elements of the macabre or supernatural into many of its scary whodunits. It too was a bi-monthly in 1949. Thrilling Detective (1931-1953) offered more traditional but still captivating hardcore murder/mystery fare for its 20+ year run and like the other pair of magazines featured here, was also a bi-monthly in 1949. Of interest is the name of Western author and icon Louis L’Amour on the cover of this issue. Note that all three of these magazines (like many another pulp regardless of genre) met their ultimate fate in the early 1950s, a devastating time that for all intents and purposes signaled the soon to arrive demise of the pulp magazine era a few years down the road.} 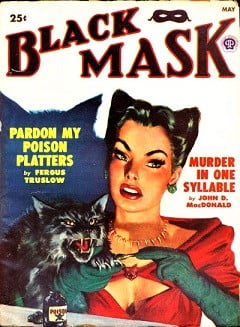 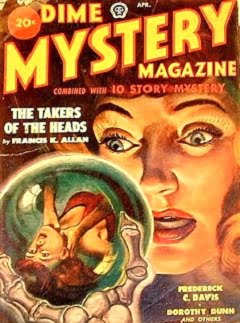 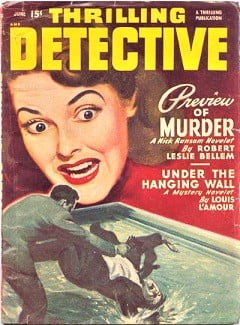