The Mysterious Traveler aired on the Mutual Broadcasting Network for almost nine years (Dec. 5, 1943–Sept. 16, 1952) and, oddly enough, never had a sponsor. It ran the gamut from science-fiction, fantasy, and horror, to mystery and suspense. The shows were written by Robert Arthur (1909-1969, photo at lower right, typing) and David P. Kogan (born 1916 and still wonderfully alive*–pictured at right), were produced and directed by Kogan, and were hosted/narrated by Maurice Tarplin (1911-1975, pictured below), whose tantalizing, yet calmly underplayed introductions would be readily recognized on many another old time radio show. Kogan and Arthur also created, wrote, produced, and directed another well-received show (Edgar Award winner, 1950, for Best Radio Drama), Murder by Experts (1949-51), featuring such mystery luminaries as John Dickson Carr and Brett Halliday as hosts. As well, Kogan and Arthur did contract writing for episodes of The Shadow and Bulldog Drummond. 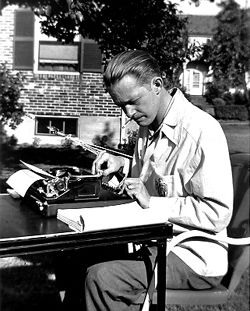 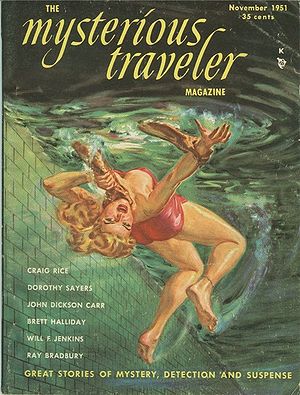 Perhaps the most interesting back story, however, behind the The Mysterious Traveler radio show, aside from those of its talented pair of writers, producer/director, host, and then magazine, is the tragic story of its unexpected demise in the autumn of 1952, while it remained as popular and well-received as ever, and must be judged as one of the most unusual cancellations in all of radio history. 1952 saw the United States and the Soviet Union in the midst of the Cold War following the end of World War II in 1945. Senator Joseph P. McCarthy had been stirring up anti-communist sentiment here at home since 1950, when, unable to garner support for his political aspirations from the Democratic party, he became a Republican. Solely for personal political gain, and at the direct urgings of investigative reporter, journalist, and newspaper man Jack Anderson–and then with the aid of FBI director J. Edgar Hoover, he sought to bring down democrats by smearing them either as communists, communist sympathizers, or as being soft on communism (one of whom he accused of being such, in 1950, was President Harry S. Truman; never mind that in the third week of June 1950, after the UN condemnation of the Chinese Communist-backed North Korean invasion of South Korea, Truman gave General Douglas MacArthur the authority to defend South Korea from the Communist incursion). Among the many casualties of McCarthy’s politically-motivated communist witch-hunt were Robert Arthur and David Kogan. Both were members of the Radio Writer’s Guild, which, of course, many in the radio business were at the time (both Republican and Democrat). With dubious “evidence” at best, the House Un-American Activities  Committee (HUAC) vaguely “determined” that the Radio Guild was “a Communist front organization.” Whereupon the Mutual Broadcasting Network and WOR, the New York flagship station of The Mysterious Traveler, caved under the perceived fallout of the ruling and cancelled the long-running program in early 1953 prior to its next season. Coincidence or not, both the radio and magazine incarnations of The Mysterious Traveler died in September of 1952.

To place the nine year run of The Mysterious Traveler in some reasonable sort of perspective as an extremely popular anthology series, it is worth comparing it to relatively contemporary TV anthology series’. So we ask the simple question, How many of today’s (let’s say within the past 50 years) TV non-series’, anthology shows–a virtually extinct breed nowadays, admittedly (i.e. those shows without returning characters unlike–whether you watch, or watched them or not–24, E.R., the various CSI‘s, N.C.I.S., The Office, Lost, Friends, M*A*S*H, Gunsmoke, All in the Family, The Andy Griffith Show, the recent Battlestar Galactica, and innumerable others), lasted nine years? None, and none even close. How many years did the original anthology series The Twilight Zone last? The original The Outer Limits? Or their new versions? How long did Tales From the Crypt last? Tales from the Darkside or Amazing Stories?

Though my collection of this show is incomplete, I have a number of the earlier offerings, a pair of which are presented below. The first, “The Good Die Young,” from February 27, 1944, falls into the suspense–or emotional horror genre, if you will. It deals with a young girl who presents herself as the perfect little angel to her new, young, and very loving stepmother, but who harbors monstrous thoughts and great ill will beneath the surface. The second offering, “Till Death Do Us Part,” aired on November 11, 1948, and relates the lengths to which an obsessed and clinging wife will go to keep her man. This one is squarely in the realm of the supernatural horror tale.

*{Editor’s Note:  Shortly following Tangent Online‘s presentation of the above Mysterious Traveler episodes, I received the following email from none other than David P. Kogan, co-writer, and producer/director of the show. It seems the information I gathered from several online sources was in error as to his date of birth, and had listed him as being deceased. That error has now been corrected. Mr. Kogan writes: