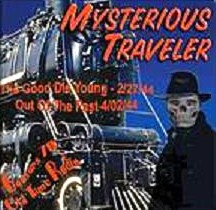 As were all Mysterious Traveler episodes, Robert Arthur and David Kogan wrote, directed, and produced the show for almost a decade. “Symphony of Death” aired on September 8, 1946 and begins strangely, but still benignly, when a genius composer on his way home from a rehearsal spots a sale on tombstones and buys three–one each for the three sisters with whom he lives, all four still residing in their large childhood home long after the death of their parents. At first glance it would seem they all live happily, the sisters doting on their genius brother, happily taking care of his every need. Things soon turn dark when… But to say more would give it away.

As long-time announcer Maurice Tarplin puts it at the beginning of every show, travel now on “another journey into the realm of the strange and terrifying” as you listen to “Symphony of Death” and discover a dark family secret not spoken of for more than a quarter century.

1946 was not only a good year for Old Time Radio and the Mysterious Traveler, but for science fiction fans as well. A treasure trove of classic SF saw print in 1946, including Murray (aka Will F. Jenkins) Leinster’s “A Logic Named Joe” (Astounding, March), Ray Bradbury and Leigh Brackett’s “Lorelei of the Red Mist” (Planet Stories, Summer), and Bradbury’s “The Million Year Picnic” also from the Summer issue of Planet Stories, “Vintage Season” by Lawrence O’Donnell (aka C.L. Moore & Henry Kuttner) from the September issue of Astounding, Kuttner again with “Absalom” from the Fall issue of Startling Stories, and Theodore Sturgeon’s “Mewhu’s Jet” from the November issue of Astounding.