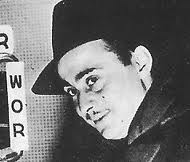 The Mysterious Traveler ran from 1943-1952 when, for controversial political reasons and while still highly popular, it was pulled from the air. The creative geniuses behind the show were Robert Arthur and David P. Kogan who wrote, directed, and produced the shows. Maurice Tarplin (pictured at right) was the show’s narrator; the gentle menace in his voice became a popular and integral part of the show and was recognized by millions on a weekly basis.

MT scripts were varied, ranging all over the darker landscape of several genres; from fantasy to mystery, from murder to the supernatural and the occult, to science fiction. “If You Believe” falls into the science fiction camp, with a decided touch of psychological fantasy. On the surface it might seem to be nothing but the tale of a mad scientist trying to create life from nothing, but the similarity to this hoary old trope ends there and travels in a deeper, more interesting direction. Saying much more would spoil the effect of this clever and insightful twist on a cliched storyline, as a professor and his lovely daughter try to make a life for themselves following a trumped up newspaper story concerning the professor’s experiments that has led to his exile. “If You Believe” aired on December 29, 1946.