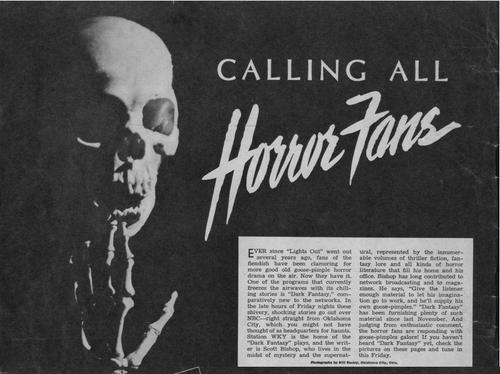 Dark Fantasy (1941-1942) was rather short-lived and originated out of the Oklahoma City, Oklahoma radio station WKY on Friday nights. “The Man Who Came Back” aired on Dark Fantasy as its first episode on November 14, 1941. Scripts were written by Scott Bishop and covered science fiction, horror, and mystery. This episode is more in the supernatural vein, and involves a masquerade, a murder, a story within a story, and, as the title implies, “The Man Who Came Back.”

While America turned to the comforting sounds of its radios in the chill November days of 1941, SF fans were cozying up with their favorite SF magazines, reading stories such as Isaac Asimov’s classic “Nightfall” (Astounding Science Fiction, September), one of Alfred Bester’s finest, “Adam and No Eve” (ASF, also in September),  “A Gnome There Was” by Henry Kuttner & C. L. Moore (Unknown, October), and arguably the best time-travel story ever written at the shorter lengths, Robert A. Heinlein’s “By His Bootstraps” (ASF, October). Boston SF fans would hold their first SF convention with Boskone (which is still going strong to this day), and just 23 days after Dark Fantasy would air “The Man Who Came Back” the Japanese would bomb Pearl Harbor on December 7, 1941.