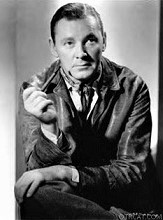 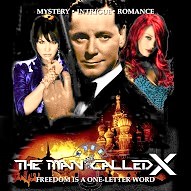 The Man Called X (1944-45, 1946, 1947-48, 1950-52) aired “Dr. Alvarez’s Laboratory” on December 2, 1950, as the 8th episode of the 86 aired during the 1950-52 run. The only other episodes of this program we have showcased were from February of 2019 and January of 2020. Estimates are that there were 227 episodes from all years and that only 103 still exist, with 98 coming from the 1947-48 and 1950-52 runs. Well known and highly regarded British actor Herbert Marshall (1890-1966, photo at right) played Ken Thurston, known as the eponymous Man Called X. He was an intelligence agent for the British, much as Brian Donlevy played undercover intelligence operative Steve Mitchell for the Americans in Dangerous Assignment. Marshall would star in all but three or four episodes of what came to be known as his series, and that includes every episode from 1944 through 1952, during which time he could be seen in any number of Hollywood films, appearing in varying roles with stars such as Marlene Dietrich, Greta Garbo, Bette Davis, Katherine Hepburn, Joan Crawford, Fredric March, Tony Curtis, Rex Harrison, and others too numerous to mention. Of genre interest he appeared as Inspector Charas in 1958’s classic SF film The Fly, which starred Vincent Price. Marshall lost his right leg in World War I, and wishing to do his part but unable to fight in WWII, at his own expense he traveled to numerous military hospitals in the United States and encouraged other amputees to remain positive and not think of themselves as handicapped. He would also appear often on the Armed Forces Radio Service (AFRS) as host of the popular war-time program The Globe Theater. From his other war-time projects as well as several films in which he starred, the proceeds went to several war charities. Marshall had not only worked in film since 1927 as both character actor and leading man, but along with his role in The Man Called X would have roles in at least a half dozen other radio programs, and would work in television in his later years, including two episodes of Alfred Hitchcock Presents and a recurring role in 77 Sunset Strip (1958-64). For his achievements in all of these media Marshall received a star on the Hollywood Walk of Fame in 1960.

This episode follows Thurston to Guatemala in answer to a request by one Dr. Alvarez about a situation of the utmost urgency. It seems his well-guarded laboratory, hidden deep in the jungle somewhere outside Guatemala City, has been compromised. A vial of a modified, now deadly, Asiatic virus has been stolen and there is no cure. If it should fall into the hands of an unfriendly government or country, that government or country could conceivably rule the world. It is our man Thurston’s job to find out who stole the vial of deadly virus, who might have it now, where its final destination might be, and recover the test tube that potentially threatens the entire human race if its contents should be released, even accidentally. Get ready for a story too close to home, especially in these current times, as you learn about the deadly Asiatic virus that has gone missing from “Dr. Alvarez’s Laboratory.”

{The first few days of December 1950 found the neighborhood miscreants at their second home—the nearby newsstand—with nickels and dimes jingling in their pockets just burning to be spent. Having bought all of their regular magazines—mostly SF and Fantasy fare—they now turned to just about anything that looked interesting, for it was unthinkable to leave the newsstand with anything but empty pockets. Dime Detective (1931-53) along with Popular Detective (1934-53) helped scratch the lingering itch left over from listening to this episode of The Man Called X, with its appeal to detection and danger. Popular Detective turned out to be an especially good choice, for it routinely ran stories from most of the top shelf authors of its time. Dime Detective was a monthly in 1950 while Popular Detective was a bi-monthly. Jungle Stories (1938-54) ran one of its popular Ki-Gor stories in almost every issue, the Tarzan-lite character tapping into the same elements that made the Lord of the Jungle so beloved decades earlier in story and film. Able to draw stories from the likes of Seabury Quinn (see cover below) didn’t hurt either. It was a quarterly in 1950. All three of the pulps featured below began their highly respectable runs in the 1930s and ended within a year of each other in the pulp magazine purge of the early 1950s.] 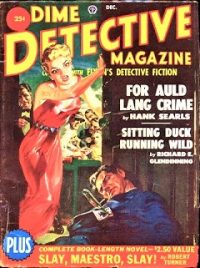 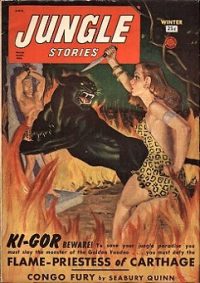 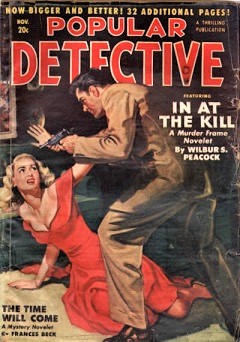