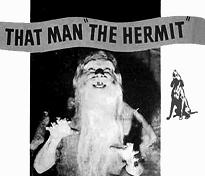 The Hermit’s Cave aired “The Nameless” on…no one knows for sure when it first aired. From 1930-1947 the show went through various name changes, formats, sponsors, and different runs. After doing a little research and armchair sleuthing, it is definitely possible that this episode aired sometime in 1936, and since no one knows for sure and for purposes here and now, I will give it an air date of May 26, 1936…exactly 82 years ago today, May 26, 2018. How’s that?

Out of some 800 shows over a 17-year time span only around 30 have survived, and the show’s history is relatively sparse and convoluted, going by different names and without information surviving as to the writers and air dates; even show titles have been lost. The short version runs something like this: The show operated more like a franchise than a single, straight up syndicated show originating out of one radio station, even moving from its original station out of Detroit to California at one point. Below is a timeline of the show’s various incarnations, though “The Little Theater of the Air” was also appended as a subtitle under the primary title in some instances.

History of The Hermit’s Cave

This episode, “The Nameless,” is the creepy story of an honest inventor, Stanley Crayton, and his crooked partner, Harden Wilgen. At its core, the plot is a simple and standard one used often, that of revenge from the grave. Crayton has invented a device for cooling the interior of automobiles–in short the common car air-conditioner we take for granted today. His invention will make him rich. Crayton’s partner decides to murder him and reap the rewards for himself. The bulk of the first half of the story focuses on Crayton’s corpse lying in the morgue, suddenly and inexplicably come to life, and his escape. This section is filled with a wild sort of frenzy as he scares an attendant half to death who can’t believe he hears a corpse speaking and moving, and Crayton’s own frantic disbelief at his situation, and then single-minded obsession to escape and find Wilgen to mete out his revenge. Another nice twist to the simple “revenge from the grave” theme is that there is more to Crayton’s walking corpse than meets the eye, about which I will say no more.

(Above right and just for fun: one of many products for do-it-yourself home-embalming fluid from back in the day. Unless your home doubled as a funeral parlor, who would use this in their home and why? Would you hide it on a shelf in the cellar next to Uncle Fred’s preserved corpse–or little Jenny’s still life-like body propped and sitting patiently at the small table with her stuffed dog waiting for a friend?)

Crayton’s new invention of air conditioning for cars piqued my curiosity as to just when did car air-conditioning become available? It seems the unknown author of the script was keeping up on current events, for a little research reveals that crude and unworkable experimentation with auto air-conditioning began around 1930–one totally unworkable system requiring a whopping 26 gallons of gas per hour, making its feasibility a non-starter. It turns out that the first commercially available, factory-installed auto air-conditioner came from the Packard Motor Car Co. in 1940, following a model at the 1939 Chicago car show. And it wouldn’t be until 1969 that the “Big 3” auto makers installed AC in over half their lines of cars. So the author of “The Nameless” was foresighted enough to hang his little horror story on a near future (at the time) invention–three years before it would become a reality. It almost has the feel of an SF story, though doesn’t quite make the cut. The concept was already out there and being worked on, and our inventor doesn’t provide any details of his invention, so it’s close but no cigar. Still, a fun blend of science and horror in a scary little half hour radio program, also three years before the first World Science Fiction Convention in New York, held in conjunction with the 1939 New York World’s Fair whose theme was “The World of Tomorrow.”

{May of 1936 found the neighborhood gang restless for summer vacation, their minds wandering in the classroom while awaiting their release and a meeting at the neighborhood newsstand. Astounding (1930-present, now Analog), a monthly in 1936, never failed to capture their fluid imaginations and this issue, featuring a cover story by one of the earliest and most beloved of the early SF pioneers, Jack Williamson, was quickly grabbed. Weird Tales (1923-1954) promised darker pleasures just right for dragging unsuspecting little minds into places that might leave them thinking about the horrors they’d read earlier, while lying in bed that night–and those moving shadows in the closet–especially after listening to “The Nameless” with its walking corpse-thing. Though they’re too small to read here, the names on the bottom of this issue’s WT cover are sure-fire winners: Edmond Hamilton, Seabury Quinn, and Robert Bloch. In 1936 WT was also a monthly. Wonder Stories (1930-1936) also fueled the fires of the imagination with its wild (but hardly scientifically grounded) flights of fancy, and was a perfect complement to both Astounding and Weird Tales. The magazine was a monthly until its final three issues, the one pictured below being its last. It would be resurrected a few months later in August of 1936, however, but under its new title of Thrilling Wonder Stories.} 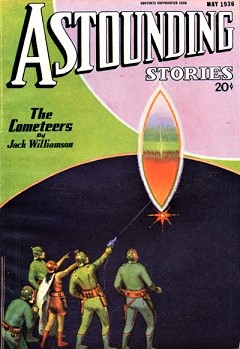 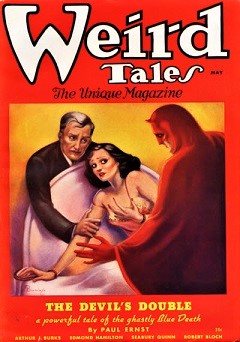 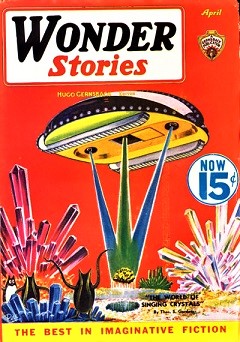