“From shadows and stillness, mystery weaves a spell of
strangest fascination, charging the mind with doubts and fears.
For mystery is a strange companion, a living memory in The Haunting Hour.”

The Haunting Hour (1944-early1960s) aired “The Uptown Express” on September 11, 1945 on station WIND out of Chicago, IL. This week’s episode has been selected and introductory notes written by Golden Age Radio historian Karl Schadow. Karl’s invaluable research on several issues dealing with contradictory information, or hard-to-find facts for several past episodes has been most appreciated, and I am delighted to welcome him this week as a Guest Presenter. Without further ado, I’ll turn it over to Karl.

During the past few years many details of this series have been ascertained including the titles of all 52 episodes (see link) which were produced and recorded by the NBC Radio-Recording Division at its New York studios.

NBC promoted this transcribed, syndicated series of original radio dramas as a companion to its previously-released series of literary classics, The Weird Circle. Designated as Episode #23 of The Haunting Hour, “The Uptown Express” features a common science fiction theme: time travel. The story features Kay Loring (b. ca. 1913-d. 1992, rare photo at left), best known for her work in George Abbott Broadway productions, as a young woman who while riding the New York City subway, is horrified when she discovers that she’s been catapulted five years into the future. The manner in which this is accomplished in the tale is tantalizing, a bit hazy. Co-starring as her husband Johnny is Eddie Nugent (1904-1995, photo at right). The third member of this small cast is Neill O’Malley who portrays Sid. Barry Kroeger is the anonymous narrator. The episode was critiqued by Tom Gries whose assessment in Variety (February 5, 1947) proclaimed: ” . . . the show emerges as better than fair radio . . . thesping is okay and suspense holds well . . .” Serving as the series producer/director was Bert Wood and not Edwin Wolfe who is incorrectly stated as the director in numerous print and online sources. Wolfe however, was one of the many script writers of the series joining Max Ehrlich, Betty Ulius and Murray Burnett among others.

The author of “The Uptown Express” is currently unknown. Editorial supervision was handled by Steve Carlin. An additional positive note of the Gries review stated: “…sound effects on the subway are excellent.” One of the staff who performed these articulated patterns was F. Tilden Brown, an NBC employee who commenced his career as did many others at the network, by rising from the ranks of the Page. An integral part of each episode of The Haunting Hour was the mysterioso music contributed by Rosa Rio who had previously sat at the organ console for numerous daytime serials and such mysteries as The Shadow and Horror, Inc. The Haunting Hour was first heard on the Hollywood station, KECA in the spring of 1945 sponsored by the Thrift Drug Store chain. Broadcast on numerous local stations and bankrolled by a variety of advertisers, its initial distribution continued into the early 1960s.

Much of the material presented above was initially published in the program guide which accompanied the CD set (#46532) of The Haunting Hour as released by Radio Spirits in 2015. 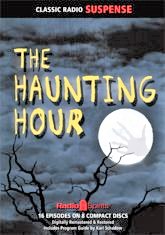 {September of 1945 saw the neighborhood gang reluctantly back in school, making their weekly trip to the corner newsstand an even more welcome respite from their history or geography lessons. The geography they preferred came by way of the uncharted lands yet discovered on other planets, such as those in the following SF magazines. Astounding SF (1930-present, now Analog) always intrigued and challenged them, no more so than in the issue below which featured the 2nd installment of A. E. van Vogt’s now classic novel The World of Null-A. Astounding held to its accustomed monthly schedule in 1945. fantastic adventures (1939-53) never failed to set afire young imaginations with its colorful adventure stories and enticing covers. What youngster (or oldster for that matter) could resist a good dinosaur story? fantastic adventures went bi-monthly in 1949 and remained on that schedule until its demise in 1953. Weird Tales (1923-54) was always good for creepy, dark, supernatural tales of the macabre and morbid variety, a perfect example served up in the issue below with Robert Bloch’s “The Skull of the Marquis de Sade.” WT went from a monthly to a bi-monthly schedule in 1940, a schedule it maintained until its (first) death in 1954.} 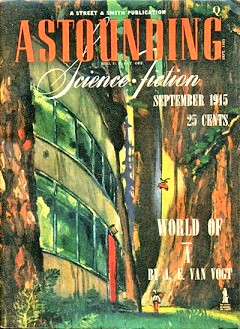 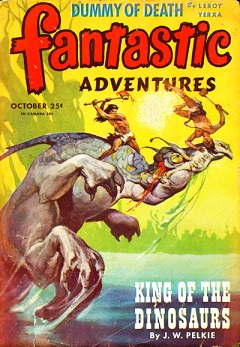 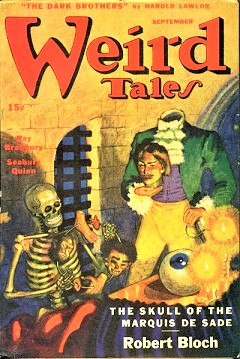