“No… No… stay where you are. Do not break the stillness of this moment. For this is a time of mystery. A time when imagination is free, and moves forward swiftly, silently…. This is — The Haunting Hour!”

The Haunting Hour (originally transcribed 1944-45) aired “The People in the House” in 1945. Only 52 episodes were produced, of which it is estimated 41 have survived.  Frustrated by not being able to pin down an air date for this episode (there were several conflicting ones), I turned to Old Time Radio historian and friend of this weekly feature Karl Schadow for help. Karl explains:

“As to dates and program numbers, The Haunting Hour was a transcribed, syndicated program which was available to stations and sponsors for some 15 years. There are no official broadcast dates for these episodes. I realize that some logs and vendors have to put dates on their products, but this may cause confusion down the road if an episode ends up with two different dates. My suggestion is that you state it was first broadcast in 1945 and could still be heard on various markets into the early 1960s. The program number 27 is taken directly from the NBCRRD (NBC Radio-Recording Division) transcription discs. Moreover, there were no official seasons of The Haunting Hour. Not all of the 52 episodes have extant audio.”

Karl’s reference to “program number 27” is to the Radio Spirits CD The Haunting Hour, for which he provided the excellent background and history of the show in its Program Guide (CD cover below). Karl also notes that while veteran radio actor Berry Kroeger was the show’s narrator for all but a few episodes, long-time voice of the Shadow, Bret Morrison, filled in for Kroeger for this episode. Karl also notes that the producer/director was Bert Wood, sound effects artist was F. Tilden Brown, and it was organist Rosa Rio who supplied the “mysterioso music.” Once again, I wish to offer my thanks to Karl Schadow for his expert, timely assistance in unraveling the often times gordian knot of Old Time Radio history. 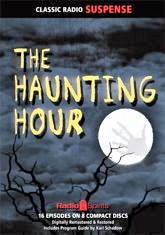 “The People in the House” tells the story of a truly repulsive old man, whose spoiled, wimpish, spineless son and his son’s wife live with him. The father rules with an iron fist (and uses it) to keep his son from moving out or getting a job, and mentally tortures and emotionally blackmails the endearing, loving wife as she tries in vain to get the man she loves to leave home and start their lives anew, by themselves and on their own terms. While this story thread develops throughout the episode, a darker element is introduced involving a murder, a man nearing execution for his crime, and a secret the old man holds that binds the entire sordid story together. And it doesn’t help matters much–or him–when he is exposed as an out and out woman hater. So on that happy note, and if you are in the mood to witness the psychological and physical cruelty of a singularly despicable character, then you will certainly enjoy “The People in the House.”

{Though no specific air date for “The People in the House” is given, one of the air date logs of one of its several syndicated runs cites August 17, 1945, so we will use that date for our purposes here. For the neighborhood gang, August of 1945 was a time of good news and bad news. The good news was that World War II had just ended, with the Japanese unconditional surrender on August 14th. The bad news was that in a few short weeks they would see themselves returning to school once again, and another glorious summer vacation would be over.To ease the forthcoming pain they scuffed their way to the local newsstand to lighten their mood and spend a few hours imagining voyages and adventures in space and across the galaxy via the pages of their favorite pulp magazines. Astounding (1930-present, now Analog) was, as always, an easy decision. The magazine continued its solid monthly schedule in 1945, one of few not affected by the paper shortage during the war years. Startling Stories (1939-55) always promised colorful adventure and this issue was no exception, with stories of a different dimension and a hollow world. It was a quarterly in 1945. Thrilling Wonder Stories (1936-55) was also on a quarterly schedule in 1945 and provided another reliable outlet for the stange and outlandish sort of story where imagination was king.} 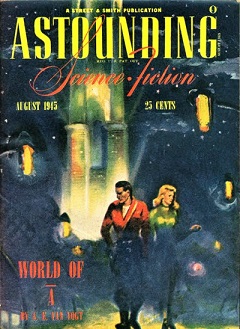 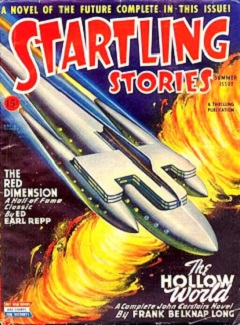 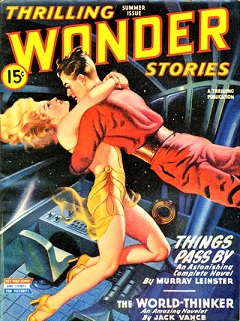