The Green Lama (June 5, 1949–August 21, 1949) aired “The Million Dollar Chopsticks” on June 26, 1949 as the 4th of its 11 episodes, only 5 of which now remain in circulation (5 if you count the audition which was the same as the first episode, otherwise only 4 original episodes still survive). This is the 3rd episode of the show we have showcased, the previous episode coming in February of this year.

The Green Lama first appeared in a short novel-length story in the April 1940 issue of Double Detective (1937-1943, cover above left), and would be the cover story for the next 12 consecutive issues (ending with the October 1941 issue). Much like the Shadow, the Green Lama had his origins in the Far East, notably Tibet (and like the Green Hornet, the Green Lama has a sidekick/confidant from the Far East, played by dialectician Ben Wright, the master of many radio voices). His primary alter ego is Jethro Dumont, though others he would be known by were Dr. Charlies Pali and Hugh Gilmore. (Note that the Shadow went by several names as well.) Born of rich parents who were killed in an accident while attending Harvard (similar to the origin story of Bruce Wayne/Batman), Dumont would spend years in Tibet studying to be a lama (a spiritual teacher). While there he would acquire mystical powers of the supernatural variety that he would use to combat crime upon his return to the United States. Though the character’s superpowers would change from time to time from his magazine, comic book, and radio iterations, they included variously the ability to fly, travel through time, super speed and strength, the ability to throw energy beams, control fire, resurrect the dead, and control animals. Whew, talk about superpowers! To “activate” his powers (as in the episode here), the Green Lama would simply recite “Om mani padme hum” (which translated from the Sanskrit meant Om, the jewel on the lotus) and he was ready to rock and roll.

The Green Lama’s short-lived radio show hit the airwaves a few years after his pulp and comic book appearances were history. The Lama’s character would be played in all eleven episodes by ubiquitous radio and film actor Paul Frees (1920-1986, photo top right). Frees had several genre tie-ins including (but not limited to) 1951’s classic SF film The Thing (from Another World), as Dr. Voorhees, The War of the Worlds (1953, as a reporter), Earth vs. the Flying Saucers (1956, as one of the aliens’ voices, uncredited), King Kong Escapes (1967, as Dr. Hu), Beneath the Planet of the Apes (1970, as the ending Voiceover), The Last Unicorn (1982, as Mabruk), Thlm Worlds of George Pal (1985, as narrator of the documentary about the famed director), and finally, released in 1987, seven months after his death was The Puppetoon Movie where he was Arnie the Dinosaur/Pillsbury Doughboy (voice). The film was dedicated to Frees. For television Frees played a number of iconic roles, perhaps the most fondly remembered and recognizable was that of Boris Badenov in The Rocky and Bullwinkle Show (1959-64). He would also play the parts of other characters in the show and could be heard in 326 segments of 163 episodes. His final voice appearance came in 1984 in the episode of the television show Knight Rider. He was the voice of K.A.R.R. in the episode titled K.I.T.T. vs. K.A.R.R. If Mel Blanc was the man with a thousand voices, then Paul Frees wasn’t far behind.

This episode finds Jethro Dumont, alias the Green Lama, traveling from New York to Hong Kong at the request of an old friend, one Rita Randolph. As the financial partner in a new export business specializing in Chinese Art objects, Rita’s partner has swindled her and left her broke, hence her seeking help from her old friend. Hong Kong is a dangerous part of the world, a crossroads where not only refugees pass through as they seek to emigrate to a better home, but thieves, smugglers, and murderers ply their nefarious trades. It is not long after Jethro begins investigating the characters (business and otherwise) involved with his friend Rita’s failed export business that someone is murdered and whose dying words mention an unusual pair of jade chopsticks rumored to be worth a million dollars. A curse might also have been mentioned somewhere along the line, as part of the mystique surrounding the chopsticks, making the search for the new owner of the rare items even more paramount. Curse or no curse, the mystery revolves around the strange jade chopsticks, their historical value topping $10,000 at normal market prices, much less what makes them “The Ten Million Dollar Chopsticks.” This is a fine little mystery that even tosses in a love interest for the Green Lama, making this a most pleasant half hour of classic radio.

{Late June of 1949 found the neighborhood gang reveling in the freedom of summer vacation and hitting the local newsstand several times a week. Following the purchase of their favorite SF pulps, a few more mowed lawns provided the nickels and dimes for the newly arrived stock of detective pulps. Detective Tales (1935-53) fit the bill perfectly with its advertised 15 stories per issue, giving readers more than their quarters worth. It was a monthly in 1949. Ten Detective Aces (1928-49) enjoyed a lengthy heyday for over 20 years, but the issue below would be its next to last. It was a bi-monthly in 1949. 10 Story Detective (1938-49) focused on Police & Crime action stories during its 11-year run, but as with Ten Detective Aces, the issue below would be its next to last. It too was a bi-monthly in 1949.] 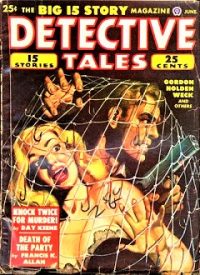 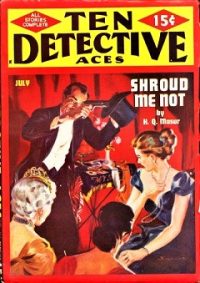 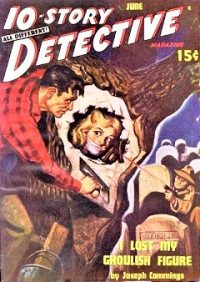