The Green Lama first appeared in a short novel-length story in the April 1940 issue of Double Detective (1937-1943, cover at left), and would be the cover story for the next 12 consecutive issues (ending with the October 1941 issue). Much like the Shadow, the Green Lama had his origins in the Far East, notably Tibet (and like the Green Hornet, the Green Lama has a sidekick/confidant from the Far East, played by dialectician Ben Wright, the master of many radio voices). His primary alter ego is Jethro Dumont, though others he would be known by were Dr. Charlies Pali and Hugh Gilmore. (Note that the Shadow went by several names as well.) Born of rich parents who were killed in an accident while attending Harvard (similar to the origin story of Bruce Wayne/Batman), Dumont would spend years in Tibet studying to be a lama (a spiritual teacher). While there he would acquire mystical powers of the supernatural variety that he would use to combat crime upon his return to the United States. Though the character’s superpowers would change from time to time from his magazine, comic book, and radio iterations, they included variously the ability to fly, travel through time, super speed and strength, the ability to throw energy beams, control fire, resurrect the dead, and control animals. Whew, talk about superpowers! To “activate” his powers (as in the episode here), the Green Lama would simply recite “Om mani padme hum” (which translated from the Sanskrit meant Om, the jewel on the lotus) and he was ready to rock and roll.

The Green Lama’s short-lived radio show hit the airwaves a few years after his pulp and comic book appearances were history. The Lama’s character would be played in all eleven episodes by ubiquitous radio and film actor Paul Frees (1920-1986, photo top right). Frees had several genre tie-ins including (but not limited to) 1951’s classic SF film The Thing (from Another World), as Dr. Voorhees, The War of the Worlds (1953, as a reporter), Earth vs. the Flying Saucers (1956, as one of the aliens’ voices, uncredited), King Kong Escapes (1967, as Dr. Hu), Beneath the Planet of the Apes (1970, as the ending Voiceover), The Last Unicorn (1982, as Mabruk), Thlm Worlds of George Pal (1985, as narrator of the documentary about the famed director), and finally, released in 1987, seven months after his death was The Puppetoon Movie where he was Arnie the Dinosaur/Pillsbury Doughboy (voice). The film was dedicated to Frees. For television Frees played a number of iconic roles, perhaps the most fondly remembered and recognizable was that of Boris Badenov in The Rocky and Bullwinkle Show (1959-64). He would also play the parts of other characters in the show and could be heard in 326 segments of 163 episodes. His final voice appearance came in 1984 in the episode of the television show Knight Rider. He was the voice of K.A.R.R. in the episode titled K.I.T.T. vs. K.A.R.R. If Mel Blanc was the man with a thousand voices, then Paul Frees wasn’t far behind.

As noted at the top, “The Man Who Never Existed” served as the show’s first episode. (It was also the show’s audition episode, not an automatic given in radio at the time that an audition tape would be a show’s first episode.) A renowned and well-loved professor of antiquities has been murdered and it is up to the Green Lama to find and apprehend the killer (or killers) and the reason for this dastardly deed. The path to the answer leads our hero to Mexico and priceless Mayan relics the deceased professor has recently discovered. The trip to Mexico is fraught with danger and proves a worthy test for the exalted Green Lama as he attempts to solve the case of “The Man Who Never Existed.” So listen now to discover the answers to these questions and just how the enigmatic title fits into the story.

{When this episode of The Green Lama aired in June of 1949 the neighborhood gang had already purchased their monthly or bi-monthly SF magazines. Turning to other favorites for their action, adventure, and danger fixes found them looking at the magazines below. The Summer 1949 issue of Doc Savage (1933-49) found Doc battling with the very devil himself, but while Doc may have won that battle he lost a bigger one, for this was the final issue of his long-running magazine and the last of three to chronicle Doc’s adventures in 1949. The Phantom Detective (1933-53), another long-running, popular pulp from the early 1930s, still thrilled young readers with its masked detective’s one-man war against crime and injustice. While a bi-monthly the previous year, in 1949 it switched to a quarterly schedule and managed but 5 issues. The Shadow (1931-49), another of the amazingly long-lived hero pulps to have emerged in the early 1930s, still found its hero–like Doc Savage and the Phantom Detective–doing his best to thwart the evil machinations of criminals and assorted evils of both the mundane and darker varieties. Like the Summer 1949 issue of Doc Savage, this Summer 1949 issue of The Shadow would be its last, and like Doc’s, the last of three to  chronicle its namesakes adventures in 1949. Quite the coincidence and major loss for stalwart fans of both magazines.] 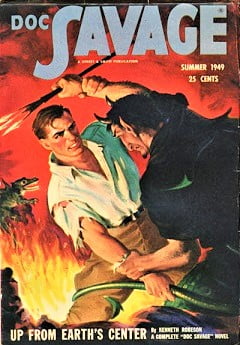 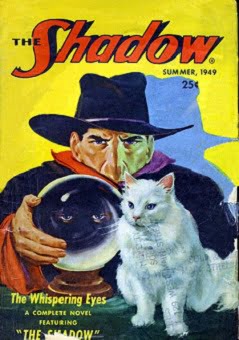