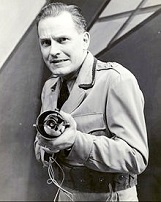 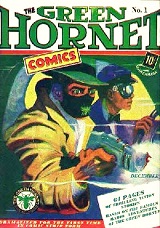 The Green Hornet (1936-52) aired “Official Business” on August 8, 1943. Created by the same duo who created The Lone Ranger on radio, George Trendle produced and James Jewell directed The Green Hornet. As with all superheroes of the day, the Green Hornet had a secret identity behind his mask, his being Britt Reid, publisher of the Daily Sentinel newspaper. Like Batman and the Shadow, the Green Hornet was believed by the authorities to be a criminal, and so had to fight evildoers while thwarting capture by the police. Before World War II the Green Hornet would take on mobsters, gangsters, crooked rackets and dishonest politician types. During the war, however, and again like other masked superheroes of the day, he would turn his crimefighting expertise to the war effort and battle enemies foreign and domestic, mostly Nazis of one stripe or another, straightout Nazi spies, or traitors to America and its freedom.

Such is the case with “Official Business,” where we find the U. S. Army Air Corps (forerunner of today’s Air Force) inviting one of the Sentinel‘s reporters to a private test of an experimental aircraft, a plane so advanced it is sure to place our enemies at a distinct disadvantage in the air campaign. Following a successful trial flight, the Daily Sentinel reporter (sworn to silence until the existence of the plane is made public some time in the future) and pilot of the experimental aircraft are hijacked on their way back to the city, the reporter knocked out and left by the road and the pilot taken hostage for the secret information he holds about the plane. It is now up to Britt Reid as the Green Hornet to foil the Nazi spies and rescue the pilot before it is too late.

I especially like the first ten minutes, where we are given information about the secret plane, what is involved from our ace test pilot’s point of view, how to avoid blacking out in a steep dive, and why our enemies would find it impossible to intercept readouts from the various cockpit gauges on the plane with radio signals. The sound effects put the listener almost in the cockpit during the test flight, which is a nice touch.

At the height of the Green Hornet’s popularity in the 1940s–both on radio and in comic books–circulation figures for the comic book ran to three million copies a month. The cover above left is of The Green Hornet comic #1, dated December 1940. The Green Hornet and his faithful valet Kato would also appear in a number of big screen Universal serials in the 1940s, cementing his popularity (and financial success) in three media: radio, print, and film. If you’re in the mood for some thrilling adventure and intrigue set in the midst of World War II, this episode is a fine example of the Green Hornet thwarting Nazi thugs as they attempt to steal the secret of a new super plane that will most assuredly help America win the war and defeat the nasty Nazis.

The Green Hornet originated out of radio station WXYZ in Detroit, where Al Hodge (1912-1979, photo above right as Captain Video, which part he played on New York television from 1950-55) was the voice of Britt Reid/the Green Hornet from 1936 through early 1943. In August of 1943, when this episode aired, it is unclear whether the Hornet was played by A. Donovan Faust or Robert Hall. The trademark “Flight of the Bumblebee” opening, as with all Green Hornet episodes, sets the stage for this week’s “Official Business.” 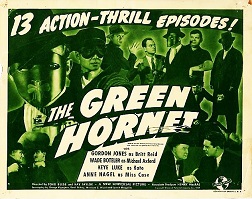 {Listening to this episode of The Green Hornet left the neighborhood band of hooligans wanting to fight evil. They therefore turned to superhero crime fighter or straight detective pulps in August of 1943 for their vicarious thrills, a few examples of which are shown below. The Phantom Detective was bi-monthly but did manage to squeeze in a seventh issue in 1943. The Shadow ceased its bi-weekly schedule with the issue below, now listed as just its August issue. And Super Detective was on an irregular schedule and saw eight issues in August of 1943.} 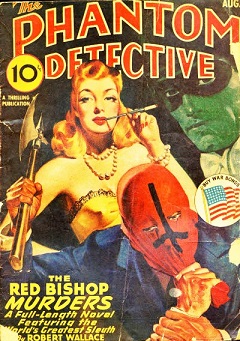 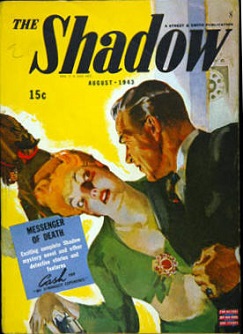 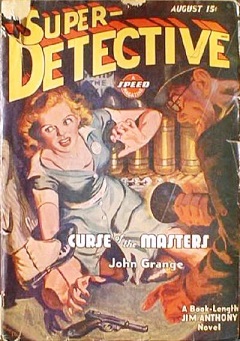