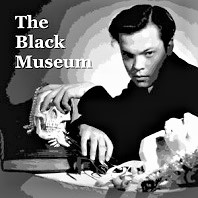 The Black Museum (1952) aired (in the United States and as near as historians can reasonably ascertain) “The Old Wooden Mallet” on May 5, 1952. This is only the 7th episode we’ve run of this show (the last being in December of 2019), so a bit of background is in order for newcomers to this sometimes grisly program. First of all, the name the Black Museum was coined in 1877 by a reporter for London’s The Observer newspaper, though the museum had opened in 1875 with the official name of simply the Crime Museum. It is the oldest museum in the world to display only artifacts of crime and is still known today by its official name of the Crime Museum despite the more colorful name given it by The Observer. The museum is not open to the public and is used primarily for instructional purposes for police training, but has had special visitors the likes of Sir Arthur Conan Doyle.

The Black Museum was one of four similar shows produced by Harry Alan Towers (1920-2009) under his Towers of London label in the late 1940s and early 1950s. Towers, a native born Britisher, would also produce popular radio fare like Secrets of Scotland Yard, Fabian of the Yard, and WHItehall 1212. All four shows centered around stories from the files of Scotland Yard, and New Scotland Yard’s famous Crime Museum, which was popularized in crime novels as the Black Museum. While all but Fabian of the Yard are verified as being produced and syndicated in Britain for future syndication, it is interesting to note that, according to the Digital Deli Too website entry, “WHItehall 1212 was a National Broadcasting Corporation production written by Lights Out’s famous scriptwriter Wyllis Cooper….” Three of the four shows, The Black Museum among them, would wrap their stories around an artifact from the museum, recounting in dramatic form the infamous crime associated with said artifact. Secrets of Scotland Yard kept to historical facts quite closely, and while a fascinating listen and quite popular, didn’t have the flair or melodramatic effect the likes of Orson Welles (1915-1985) would bring to The Black Museum as the host and narrator of each of its 52 episodes. And while The Black Museum also kept to the historical record surrounding each case, it would play a little fast and loose with them (or perhaps embellish them is the proper word) for dramatic effect, and it didn’t hurt that the show–unlike the others–drew its material solely from murders, thus guaranteeing the audience a chilling half hour. Overlay the grim stories with the somber, virtually hypnotic tones of Orson Welles and you’ve got a winner.

The airing of The Black Museum episodes presents problems for historians. Produced in 1950, it was first aired as a “pirate broadcast” by Radio Luxembourg, and then throughout Europe. It was eventually licensed by MGM Radio Attractions and ran in the United States under the Mutual Broadcasting System (MBS). MGM hand-picked what it considered to be the best 39 of the original 52 episodes and ran them from January 1, 1952 through December 30, 1952 (with a three month hiatus while a summer replacement filled the gap). This is the run from which we have taken “A Letter.” There’s more to the odd packaging and eventual airing of select episodes of The Black Museum (Canada’s CBC radio would also purchase some 38-39 episodes and air them at different times than the American run, for but one example), but all of that is neither here nor there for our current purposes.

“The Old Wooden Mallet” is the grim tale of a married philanderer cavorting with multiple women whose existence he of course keeps secret from each other, though he favors the one who doesn’t ask questions (“a loyal woman”), a stranger, and a murderer. There’s not much more to relate without giving away details, except to say there’s a good bit of excellent sleuthing (with few concrete clues) by Scotland Yard detectives, and of course the mesmerizing tones of Orson Welles that make even a grisly murder come to life.

{After listening to this dark episode of The Black Museum the neighborhood gang was in sore need of more lighthearted fare and so scheduled a trip to the local newsstand, where they found just what the doctor ordered. Other Worlds (1949-53) offered a variety of types of pure escapism, following the formula publisher Ray Palmer would use over and over in the many magazines he would start up and then have to fold when recurring financial troubles would force him to fold them, some sooner than others. True to form, Other Worlds had no set schedule, lasted only 31 scattered issues, and published 9 of them in 1952. Much beloved Planet Stories (1939-55) ran some of the most colorful space operas, planetary romances, and SF adventure fiction in a field dominated by them. Witness cover stories by the likes of Poul Anderson on the issue below. Planet Stories upped its game in 1951 from a quarterly to a bi-monthly and held to that schedule through 1952. Thrilling Wonder Stories (1936-55), another venerable and much loved SF pulp, also built—and maintained—its audience with fast-moving, high-falutin’ space adventures through time, space, and on other worlds, sure-fire keys to opening youngsters’ pockets of their nickels and dimes. TWS was a bi-monthly in 1952.] 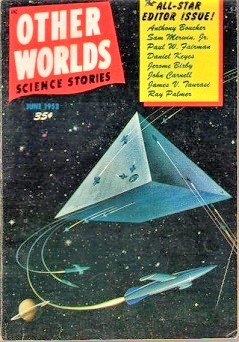 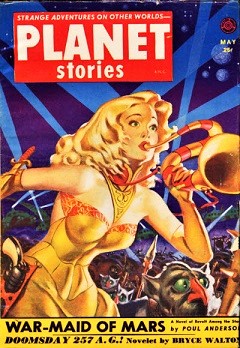 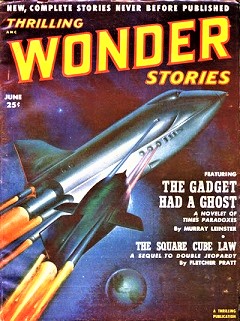