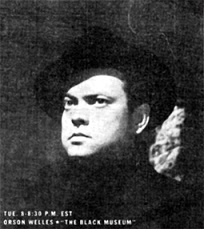 The Black Museum (1952) aired (in the United States) “A Pair of Spectacles” on May 27, 1952. This is the first episode we’ve run of this show so a bit of background is in order. The Black Museum was one of four similar shows produced by Harry Alan Towers (1920-2009) under his Towers of London label in the late 1940s and early 1950s. Towers, a native born Britisher, would also produce popular radio fare like Secrets of Scotland Yard, Fabian of the Yard, and WHItehall 1212. All four shows centered around stories from the files of Scotland Yard, and New Scotland Yard’s famous Crime Museum, which was popularized in crime novels as the Black Museum. While all but Fabian of the Yard are verified as being produced and syndicated in Britain for future syndication, it is interesting to note that, according to the Digital Deli Too website entry, “WHItehall 1212 was a National Broadcasting Corporation production written by Lights Out’s famous scriptwriter Wyllis Cooper….” Three of the four shows, The Black Museum among them, would wrap their stories around an artifact from the museum, recounting in dramatic form the infamous crime associated with said artifact. Secrets of Scotland Yard kept to historical facts quite closely, and while a fascinating listen and quite popular, didn’t have the flair or melodramatic effect the likes of Orson Welles (1915-1985) would bring to The Black Museum as the host and narrator of each of its 52 episodes. And while The Black Museum also kept to the historical record surrounding each case, it would play a little fast and loose with them (or perhaps embellish them is the proper word) for dramatic effect, and it didn’t hurt that the show–unlike the others–drew its material solely from murders, thus guaranteeing the audience a chilling half hour. Overlay the grim stories with the somber, virtually hypnotic tones of Orson Welles and you’ve got a winner. 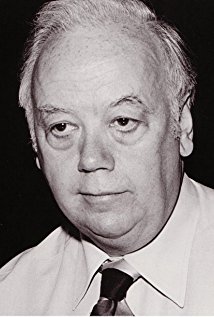 The airing of The Black Museum episodes presents problems for historians. Produced in 1950, it was first aired as a “pirate broadcast” by Radio Luxembourg, and then throughout Europe. It was eventually licensed by MGM Radio Attractions and ran in the United States under the Mutual Broadcasting System (MBS). MGM hand-picked what it considered to be the best 39 of the original 52 episodes and ran them from January 1, 1952 through December 30, 1952 (with a three month hiatus while a summer replacement filled the gap). This is the run from which we have taken “A Pair of Spectacles.” There’s more to the odd packaging and eventual airing of select episodes of The Black Museum (Canada’s CBC radio would also purchase some 38-39 episodes and air them at different times than the American run, for but one example), but all of that is neither here nor there for our purposes here.

“A Pair of Spectacles” tells the story of a young woman’s grisly murder and how her glasses came to be the artifact now on display in the museum. The fascination for learning the dramatized backstory of something we already know the ending to (a murderer caught and prosecuted), is the same fascination we exhibit by watching such television shows as Antiques Roadshow, Pawn Stars, American Pickers, and a relative newcomer to televison but more closely related to The Black Museum than even these shows–Mysteries at the Museum. Mysteries at the Museum has the host traveling the United States and visiting its museums for strange artifacts and revealing their backstories, unveiling their sometimes fascinating secrets. And this is the attraction with all of these shows, including The Black Museum: every item at an auction, or found in a pawn shop, or discovered in a barn or garage, has an interesting story to tell, even stories of bizarre and ofttimes horrific murders as Orson Welles gives voice to in each and every dark story taken from The Black Museum, and this includes the one you are about to hear, that of “A Pair of Spectacles.”

Due to the nature of this episode, that of heinous murder, certain descriptive passages may not be suitable for younger, or more sensitive listeners.

{Having already purchased their monthly SF pulps for May, the neighborhood gang returned the following weekend to peruse the bi-monthlies. Worlds of If (1952-74) was a sister magazine to Galaxy and was a bi-monthly in 1952. Its debut issue sported a March 1952 cover date and the issue below was its second issue. Imagination (1950-58) was another of Raymond Palmer’s numerous magazines to appear within a few years of each other during the late 40s and early 50s. It published 7 issues in 1952, tried going monthly for the next couple, then ended up a bi-monthly for the remainder of its run. Future (1950-54), with this specific title (it had several earlier titles virtually identical when it morphed or merged with other zines), was also a bi-monthly in 1952.} 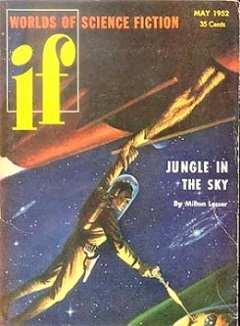 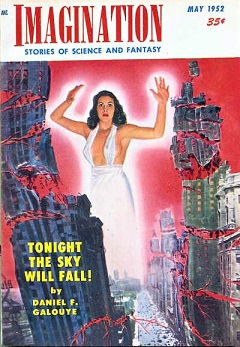 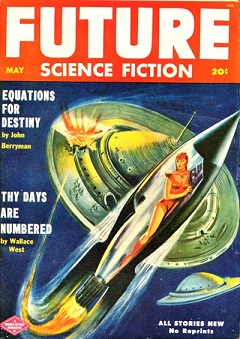