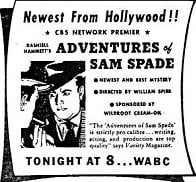 The Adventures of Sam Spade (1946-1951) aired “The Queen Bee Caper” on July 10, 1949 as its 159th episode of approximately 243, only 74 of which are still in circulation (this includes 12 AFRS repeats and 2 rehearsal shows). We have previously aired but three episodes of this show, the first in 2014, then in July of 2018 and most recently in August of 2019. For newcomers, and as a refresher for long time listeners, we reprise the historical notes about the origins of Sam Spade as presented for background to that initial episode.

Sam Spade was the private detective and creation of Dashiell Hammett (1894-1961, photo top right). Based on Hammett’s time as a Pinkerton detective from people he knew or had heard about, Spade first appeared in the third of Hammett’s five novels, The Maltese Falcon, in 1930. Only three other stories, all short works, would feature Spade in magazines and all appeared in 1932. One final Spade story was published in 2013, over 50 years after his death in 1961. The Maltese Falcon was brought to film three times: 1931, 1936, and the now film noir classic of 1941 starring Humphrey Bogart, Mary Astor, Sydney Greenstreet, and Peter Lorre. 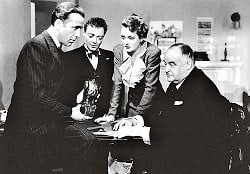 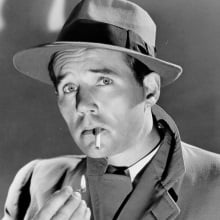 For all but its final radio season Howard Duff (1913-1990, photo at right) would star as Sam Spade. Duff would go on in later years to play various roles in quite a few films, and later with the advent of television would enjoy a lengthy career in many shows as star or character actor (drama and detective primarily) and was an easily recognizable presence on both the silver and small screens. Like Spade’s creator in the late 1940s (pre-HUAC, but Hammett failing to answer a Congressional Committee’s questions under oath stemming from his overt communist dealings), but years later and owing to a different set of circumstances, Duff found himself in the crosshairs of the early 1950s McCarthy-era House Unamerican Activities Committee (HUAC) and was labeled a communist subversive. It was at this point that this soft “blackballing” dovetailed with his burgeoning tv and film career that made it advantageous for him to leave the radio series, at which point Stephen Dunne would take over as the voice of Sam spade for the series’s final 1950-51 season. According to the writeup by Radio Spirits on their 2014 calendar, on which Duff has the November slot: “A lot of talent came out of the Armed Forces Radio Service at the conclusion of the Second World War. One of the most outstanding examples was an energetic young sergeant named Howard Duff, born on November 24, 1913. A staff announcer for many AFRS features during the war, he was ready for the big time as soon as he doffed the uniform. It didn’t take long for him to land the role of a lifetime, bringing Dashiell Hammett’s legendary private eye Sam Spade to the microphone. In his four years in the role, Duff did the impossible–he replaced Humphrey Bogart’s film version as the definitive embodiment of the Hammett character:  tough, yet vulnerable; hardboiled, yet with a sense of humor about his weekly predicaments. Among the legions of postwar radio detectives, Duff’s Spade stood out as one of the few truly originals.”

Duff would marry one of the most respected and groundbreaking women actors and directors in film history in 1951, Ida Lupino (1918-1995, Lupino & Duff photo at right). The two would star together in several films throughout the 1950s. As to Duff’s film and television appearances, they are too numerous to mention all of them here, though a sampling may recall him to many a fan of the films and TV shows in which he appeared: Films–The Naked City (1948), While the City Sleeps (1956, with Ida Lupino), and Kramer vs. Kramer (1979); Television–The Rockford Files, The Golden Girls, Knots Landing, Dallas, as “Capt.” Thomas Magnum, II–grandfather of Thomas Magnum starring Tom Selleck on Magnum, P.I. His genre credits include an episode of The Twilight Zone and Batman (“The Entrancing Dr. Cassandra” with Ida Lupino).

“The Queen Bee Caper” begins with a call from an exclusive girls school where some items have gone missing and Spade accepts the assignment to find the thief. Ere long, however, the body count begins to rise, things get serious, and more than one early possible suspect has been murdered in a most peculiar fashion. Yes, actual bees come into play but not as you may think, for there are nature’s bees, those innocent creatures ruled by their queen bee, and then there are those of the human variety unwittingly ruled by a more subtle kind of queen bee, a creature far more deadly than its winged counterpart. And what better place to uncover a human queen bee than in an institution full of girls! Sam has his work cut out for him in this adventure, so sit back and see if you can guess whodunit.

{After listening to this episode of Sam Spade, the neighborhood gang was in the mood for more action, adventure, and mystery, so headed the next day for the corner newsstand. And boy, did they hit the jackpot with the issues shown below. Action Stories (1921-1950) was one of the few remaining multi-genre pulps of the time. Publishing well over 200 issues in its almost 30-year run was proof that aiming its stories at more than a single genre reader was a wise one. It was a quarterly in 1949. Adventure (1910-1971) kept its readers returning for over 60 years, providing stories emphasizing exactly what its simple title promised, while drawing its storytellers from other genres who knew how to spin an exciting yarn regardless of genre. It was a monthly in 1949. Dime Mystery Magazine (1932-1950) also enjoyed a long run, knowing what its readers wanted and giving it to them on a regular basis. It too drew experienced pulp writers from other genres who were well versed in the requirements of the mystery story, and it showed for almost 20 years. It was a bi-monthly in 1949.} 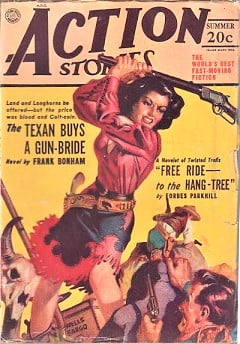 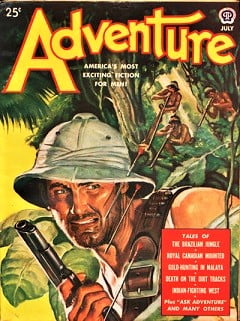 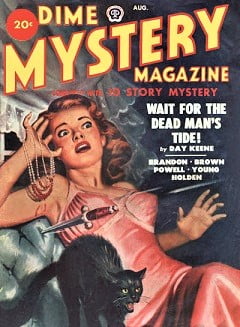