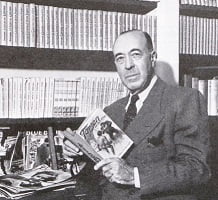 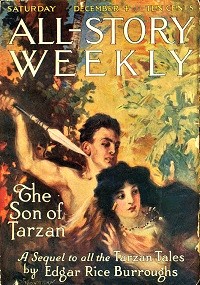 Tarzan, Lord of the Jungle (1951-1952) aired “Tarzan and the Arena of Death” on April 10, 1952 as the 66th of its 75 episodes. For newcomers, we repeat the introduction to several previous Tarzan episodes, the most recent from May of 2020, almost a year ago:  From 1932-36 Tarzan on radio consisted of three long-running serials: Tarzan of the Apes, Tarzan and the Diamond of Asher, and The Fires of Toth. Tarzan was played by silent film actor James H. Pierce and Jane was played by Edgar Rice Burroughs’s daughter Joan. Pierce had attended a party held by Burroughs where he met Joan. ERB asked Pierce if would appear as Tarzan in ERB’s next silent Tarzan picture. Pierce replied that he was to appear in another film titled Wings. ERB nevertheless convinced Pierce to become Tarzan and he gave up his role in Wings. Pierce’s role in Wings was then filled by a relative newcomer named Gary Cooper, and Wings would walk away with the first Oscar for what is now known as Best Picture in 1929. Such blow the fickle winds of Fate. On the up side, James Pierce would wed Joan Burroughs in 1928 and they would remain together until their deaths (Joan in 1972 and James in 1983).

(Photo below left: Joan and James Pierce photo cropped to show the left half of their wedding invitation, dated August 8, 1928. From the Danton Burroughs Archive Collection.) 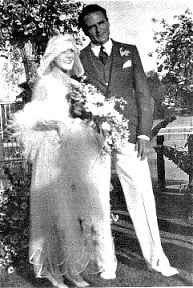 It is impractical to run lengthy serials here, though we have run a few consecutive episodes with specific self-contained adventures. Each of the 1930s Tarzan serials ran to approximately 40 episodes, give or take, and timed out from 8-12 minutes each. There would be a new Tarzan episode in the much longer story arc every two or three days throughout the week. After the trio of initial serials in the 1930s, the Golden Age of radio would produce no further Tarzan adventures until 1951, at which time his new exploits would run from January of 1951 through June of 1952 (and through July of 1953 if one counts syndicated rebroadcasts), when many radio shows were gradually being phased out in favor of television. Lamont Johnson now played the Lord of the Jungle, and in contrast to the earlier 1930s serials (and the famous Johnny Weismuller Tarzan films), Tarzan would speak intelligent English rather than the “Me Tarzan, you Jane” dialogue many have come to think of when the subject comes up.

“Tarzan and the Arena of Death” finds Tarzan trying to be a good samaritan by helping to resolve a dispute between two warring tribes over food, but soon finds himself embroiled in tribal hatreds that wind up with both tribes seeking his death. How the Lord of the Jungle escapes this no-good-deed-goes-unpunished situation is the crux of this episode, a good one filled with drama, danger, and a lesson to be learned the hard way. So do give a listen to this exciting episode as Tarzan finds himself as the feature attraction in what might easily turn into a true Arena of Death.

{After listening to this harrowing episode of Tarzan, Lord of the Jungle, the neighborhood gang could hardly wait until after school the following day to head straight for the corner newsstand to find more of the same type of exotic thrills in far-away lands as Tarzan gave them (or at least stories that echoed the same exhilarating experience of strange lands, even if not of Earth). Adventure (1910-71) fit the bill nicely with fast-moving action/adventure stories from all corners of the globe, with jungle stories a guaranteed sale for eager readers, young and old alike. It was a bi-monthly in 1952. Likewise with Jungle Stories (1938-54), though its focus was obviously narrowed to the jungle, with all its dark secrets and unknown dangers. Add a popular character like Ki-Gor as a poor man’s Tarzan and you’ve got a winner. It was a quarterly in 1952. With stories set on worlds not of this Earth, Imagination (1950-58) effortlessly transported its readers to exotic worlds where logic and science took a back seat to, well, the imagination, It featured the same broad story outlines as the other colorful action/adventure magazines shown here, but with a fresh cast of intriguing characters, alien life-forms and unusual dangers. Its editor (after the magazine was sold following its third issue from the original publisher and editor, Raymond A. Palmer) openly professed his belief that science fiction should entertain and not pay much attention to the finer points of Literature. As a result, most critics today don’t think much of Imagination as a top tier magazine compared to the memorable, oft-mentioned, or other important SF magazines of the past, though it did manage to snag stories from Robert Sheckley (his first), Philip K. Dick, and Robert Heinlein on occasion. While ostensibly a bi-monthly it managed an extra 7th issue in 1952.] 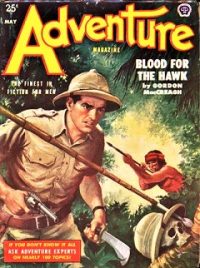 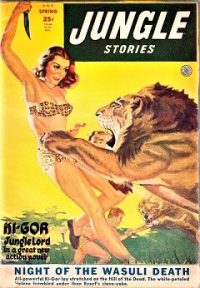 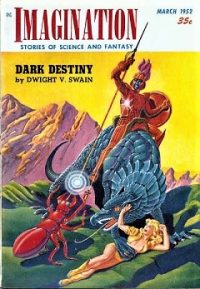