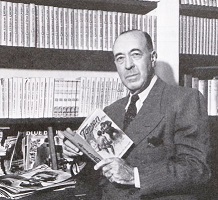 Tarzan, Lord of the Jungle (1951-1952) aired “Trouble Off San Laurencia” on July 26, 1951. For newcomers, we repeat the introduction to our previous Tarzan episode from February of 2018, almost a year and a half ago:  From 1932-36 Tarzan on radio consisted of three long-running serials: Tarzan of the Apes, Tarzan and the Diamond of Asher, and The Fires of Toth. Tarzan was played by silent film actor James H. Pierce and Jane was played by Burroughs’s daughter Joan. Pierce had attended a party held by Burroughs where he met Joan. ERB asked Pierce if would appear as Tarzan in ERB’s next silent Tarzan picture. Pierce replied that he was to appear in another film titled Wings. ERB nevertheless convinced Pierce to become Tarzan and he gave up his role in Wings. Pierce’s role in Wings was then filled by a relative newcomer named Gary Cooper, and Wings would walk away with the first Oscar for what is now known as Best Picture in 1929. Such blow the fickle winds of Fate. On the up side, James Pierce would wed Joan Burroughs in 1928 and they would remain together until their deaths (Joan in 1972 and James in 1983).

(Photo below left: Joan and James Pierce photo cropped to show the left half of their wedding invitation, dated  August 8, 1928. From the Danton Burroughts Archive Collection.)

It is impractical to run lengthy serials here, though we have run a few consecutive episodes with specific self-contained adventures. Each of the 1930s Tarzan serials ran to approximately 40 episodes, give or take, and timed out from 8-12 minutes each. There would be a new Tarzan episode in the much longer story arc every two or three days throughout the week. After the trio of initial serials in the 1930s, the Golden Age of radio would produce no further Tarzan adventures until 1951, at which time his new exploits would run from January of 1951 through June of 1952 (and through July of 1953 if one counts syndicated rebroadcasts), when many radio shows were gradually being phased out in favor of television. Lamont Johnson now played the Lord of the Jungle, and in contrast to the earlier 1930s serials (and the famous Johnny Weismuller Tarzan pictures), Tarzan would speak intelligent English rather than the “Me Tarzan, you Jane” dialogue many have come to think of when the subject comes up.

“Trouble Off San Laurencia” finds Della Carter searching Africa for her grandfather, out of contact for several years. Not knowing whether he is dead or alive, young Carter enlists the aid of Tarzan, who had seen her grandfather more than a year ago, though his whereabouts or circumstances are a mystery. Accompanying Ms. Carter and Tarzan is a man after the treasure of gold he believes the senior Carter may have found and to which he believes a portion to be his own. What the trio eventually find I shall not reveal, but the journey is fraught with danger and at one point Tarzan comes close to death while battling a giant octopus, that creature the natives call the “devil fish.” Get set for some real excitement as you listen to this episode, and prepare yourself for a bit more deadly violence than is usually found in many of these 1950s episodes, for it seems that gold brings out the worst in those who seek it at all costs.

{A sunny, cloudless blue sky on a Saturday morning in late July of 1951 found the neighborhood gang eagerly thumbing through one SF magazine after another at the corner newsstand, which had become their second home during summers when they had no school and not a care in the world. Galaxy (1950-1980) was quickly becoming a new favorite, with its debut issue coming a scant few months earlier in October of 1950. In 1951 it was a monthly. Startling Stories (1939-55) was an old favorite nearing the end of its solid 16 year run, but was still on its game and publishing entertaining escapism by the likes of Leigh Brackett and others. It was a bi-monthly in 1951. Thrilling Wonder Stories (1936-55) another old friend, was still supplying colorful adventure alongside tales with a more hard-edged sense of wonder (see Arthur C. Clarke’s “Earthlight” on the cover below), but was also nearing the end of its even more remarkable 19 year run. It was also a bi-monthly in 1951.] 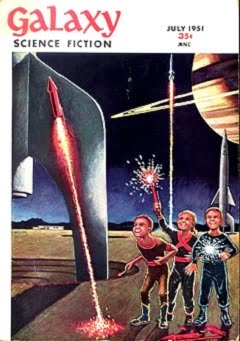 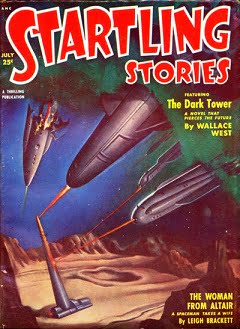 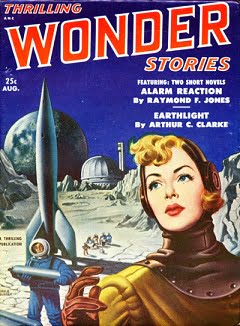