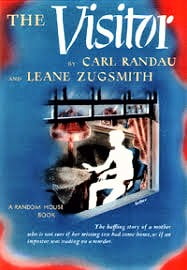 As noted in the introduction to more than the 50 episodes of Suspense we’ve presented over the past eleven years, it was one of the most well produced, written, acted, and critically acclaimed of all radio shows during the Golden Age of Radio, many a film star jumping at the chance to perform in an episode, among them Cary Grant, Orson Welles, Jimmy Stewart, Susan Hayward, Vincent Price, Charles Laughton, Loretta Young, Peter Lorre, and Rita Hayworth. After many another radio show had gasped its last during the 1950s, Suspense finally closed shop in September of 1962 whereupon radio historians proclaimed the Golden Age of Radio dead, television having become the medium of choice in America.

The Visitor was a 1944 mystery novel co-authored by the husband and wife team of Carl Randau (1893-April 1969) and Leane Zugsmith (1903-October 1969). The radio adaptation is about as faithful to any novel as can be expected for a 30-minute treatment, and the acting, along with Suspense‘s superior production values make it well worth a listen. Briefly put, the story involves a teenage boy who “disappeared” after having a quarrel with a friend some three years previous to the beginning of the story. He is believed to have been murdered by his friend but no hard evidence has ever been found. Now comes a stranger to a certain little coffee house in a distant locale where a somewhat older teenage boy works behind the counter who fits the missing (though presumed dead) boy’s description. The stranger tries to ascertain who the boy is, saying he has been paid to find him. The boy confesses he is indeed the person the stranger seeks, and agrees to accompany him back to his small hometown. Questions begin to pile up one after the other. Is the teenage boy–now almost fully grown–really the one the paid investigator brings home or a clever impostor? If he is the person being sought, why did he decide not to return to his hometown after arguing with his friend, instead of disappearing to begin a new life for himself? Why does he remember some things of his past life but not others when we can reasonably infer (from dialogue and events) he does not suffer from amnesia? Do his mother, stepfather, friends, local officials, and acquaintances recognize and welcome him home without reservation, though he has grown and changed a bit as might be expected, and do he and they recall the same past shared events detail for detail? Who is he really and is there more to the reason someone paid the investigator to find him than we are at first led to believe (and who is the person paying to find him, and why)? This is a dandy little mystery and though you might think you have it all figured out, there might still be something you don’t know until all is revealed at the end about “The Visitor.”

{Like most kids with a little money burning a hole in their pocket, the neighborhood gang was bound and determined to come home from the corner newsstand with something exciting to read. Going home empty-handed was unthinkable. Having already bought their usual magazines, they gravitated toward something new or a little different (except for The Shadow, which they bought fairly regularly). Flynn’s Detective Fiction (1924-44) was one of the longest running detective fiction pulps of all time with over 900 issues under its belt. It was a weekly until August of 1941 and by May of 1942 had become a full-fledged monthly. Its final issue came in August of 1944, a mere three months after the May issue shown below. G-8 and His Battle Aces (1930-44) began as just Battle Aces until October of 1933, at which time it adopted its permanent title. Popular during its respectable 15 year run, the issue below was its last. It was a bi-monthly in 1944. The Shadow (1931-49) had always been a favorite with the gang, especially so since the mysterious character was also in the middle of its popular radio run (1937-54). It was a monthly in 1944.] 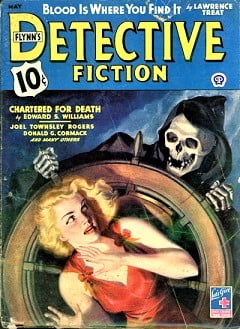 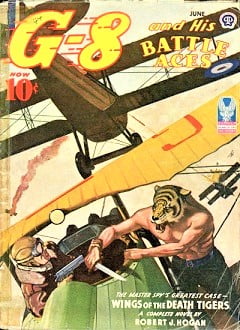 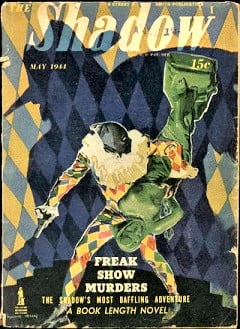