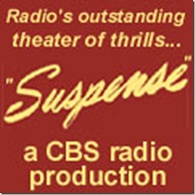 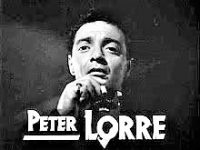 As recounted in the introduction to the more than 50 episodes of Suspense we’ve shared over the past eleven years, it was one of the most well produced, written, acted, and critically acclaimed of all radio shows during the Golden Age of Radio, many a film star jumping at the chance to perform in an episode, among them Cary Grant, Orson Welles, Jimmy Stewart, Susan Hayward, Vincent Price, Charles Laughton, Loretta Young, Peter Lorre, and Rita Hayworth. After many another radio show had gasped its last breath during the 1950s, Suspense finally closed shop in September of 1962 whereupon radio historians proclaimed the Golden Age of Radio dead, television having become the medium of choice in America.

This episode reminds one strongly of Agatha Christie’s Murder on the Orient Express, though it maintains a high level of interest due to its own specific details. “The Moment of Darkness” takes place on a train journey to the French Riviera with a mosaic cast of interesting characters, including a medium who claims to be able to raise the dead (guess who plays that character). While clues are planted here and there pointing to this or that character as the possible murderer, there is a nice double revelation at the end resolving the mystery in fine fettle. I found it a fun, well done homage to Ms. Christie’s justly famed 1934 novel (especially given its less than 30 minute format). Put on your detective hat, give it a listen, and see if you can figure out whodunit in “The Moment of Darkness.”

{The day after this episode of Suspense aired was a Wednesday. After school the neighborhood gang headed for the nearby newsstand to find more of their favorite escape reading. Astonishing Stories (1940-43) was published on a shoestring by Popular Publications, whose first editor was Frederik Pohl. Though it paid less than the major SF pulps of the time (which wasn’t much to begin with), Pohl was able to persuade classic, as well as up and coming writers (many of whom were his young friends) like Robert Heinlein, Isaac Asimov, Robert Bloch, Leigh Brackett, Clifford D. Simak,  and Alfred Bester (among others of note) to write for the fledgling magazine. Though Pohl managed to get the pay rate increased somewhat, after he entered the army in 1943 the war time paper shortage forced the magazine to fold. It was a bi-monthly in 1943, and the issue below, its 16th, was its last. Astounding SF (1930-present, now Analog) was always a must buy, it being the leading SF magazine in the field, and this issue was no exception, featuring stories by A. E. van Vogt, Nelson Bond, Henry Kuttner, Wilson Tucker, and others. It was a monthly in 1943. Captain Future (1940-44) was the brainchild of Mort Weisinger and Leo Margulies, conceived at the first SF worldcon in New York in 1939. Although a number of the hero’s stories later appeared in magazines of the time (the vast majority in Startling Stories), Captain Future magazine was the hero’s home publication and where the novel length stories appeared. They were written almost exclusively by one of the most famous pulpsters of the 1930s, known for his grand scope, galaxy spanning, “world wrecking” adventures—Edmond Hamilton. The stories were pounded out quickly for a very young audience, and truth be told were crudely written and don’t hold up well on that score. On the upside, the colorful space-faring romps with Captain Future and his unique band of compatriots captivated one and all due to the unfettered imagination and raw story-telling ability of Hamilton and a few others. Like Astonishing Stories, Captain Future was a victim of the war time paper shortage and folded after only 17 issues. It was a quarterly in 1943.] 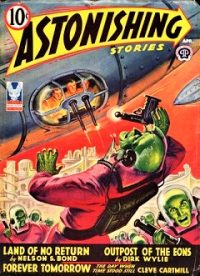 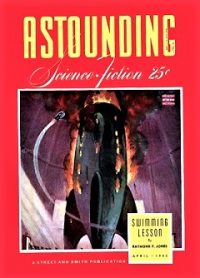 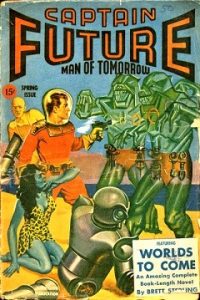