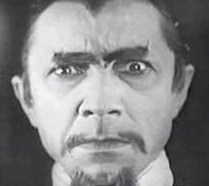 Suspense was the cream of the crop when it came to the thriller/chiller/macabre genre in classic radio. It ran from 1940 through the Fall of 1962, airing close to 950 weekly half-hour episodes. The genius behind the show was William Spier, who insisted on high production values and good scripts–all of which drew some of Hollywood’s biggest stars to the show. Among those appearing in episodes of Suspense were Cary Grant, Alan Ladd, Rita Hayworth, Jimmy Stewart, Alfred Hitchcock, Susan Hayward, Jack Webb, Peter Lorre, Vincent Price, and the star of tonight’s episode, the actor who made Dracula a household word, Bela Lugosi (1882-1956).

With his thickly-accented and much caricatured Hungarian English in full flower, here Lugosi plays a pyschologist, a psychologist who has written a paper outlining his outre and unbelievable theory that he can cure those desiring to kill themselves–to commit suicide–by convincing them to kill someone else. Laughed out of the office of his superior and righteously indignant, he nevertheless sets out to prove his theory. How he attempts to do so, and the bizarre outcome, form the story line of this craftily-plotted little thriller. The premise is a real corker to begin with (a cure for suicide is the murder of another?), but it plays out rather smartly, as you will hear.

It’s easy to see why the producers cast Bela Lugosi for the lead role of the psycho psychologist in “The Doctor Prescribed Death.” It aired on February 2, 1943 as episode 27 and one of the earliest in Suspense‘s long history.