As noted in the introduction to more than the 50 episodes of Suspense we’ve presented over the past eleven years, it was one of the most well produced, written, acted, and critically acclaimed of all radio shows during the Golden Age of Radio, many a film star jumping at the chance to perform in an episode, among them Cary Grant, Orson Welles, Jimmy Stewart, Susan Hayward, Vincent Price, Charles Laughton, Loretta Young, Peter Lorre, and Rita Hayworth. After many another radio show had gasped its last during the 1950s, Suspense finally closed shop in September of 1962 whereupon radio historians proclaimed the Golden Age of Radio dead, television having become the medium of choice in America.

Given at this particular point in time due to the COVID-19 virus being forefront on everyone’s mind, and due to the fact that millions around the world are asked or are being ordered to quarantine themselves in their residences for extended periods of time except to travel outside for essentials like food or medicine, I thought it quite apropos to showcase this episode, for it mirrors what happens far too often when a number of people are forced to share close quarters for any length of time. Small irritations grow to exaggerated proportions and often result in violence. Paranoia exerts itself and unleashes unwarranted panic, which again often leads to violence and other irrational impulses. So imagine yourself now in the place of one of the four main characters in this tense drama, three of whom are aboard a bus on a return trip from a winter visit to a remote insane asylum couched deeply in the mountains, and the fourth being the bus driver. On their way down the winding mountain road they learn that an inmate from the asylum has escaped and to be on the lookout. Duly alerted and senses tingling with the information, they are then soon buried by an avalanche and left to their own devices. Close quarters, the possible looming danger of an escaped inmate on the loose (a homicidal maniac, no less), and effectively cutoff from help trapped in their metal prison, their worst inner fears begin to take over. And when they convince themselves that one of their number might be the homicidal maniac things get very interesting, very quickly.

So to pass the time that you find yourself cutoff from the outer world and forced to deal with those you think you know, or even love, listen to this timely study in paranoia and terror. And don’t be alarmed. This is only a fictional exercise and couldn’t possibly happen to you. There will be no need for you to glance over your shoulder each time you enter a room in your house or apartment–especially as night falls or later in the dark when everyone is…sleeping. You tell yourself there’s really no need for you to sleep apart from the one you love, that it was just his or her nerves getting the best of them that led to the argument and all will be back to normal in the morning. Sleep tight, gentle listener, but first see if you can figure out who the homicidal maniac is on this very unusual “Return Trip.”

{When this episode of Suspense aired in late June of 1946, the neighborhood gang almost lived at the nearby newsstand when not at their local elementary school playground which sported two back-to-back baseball fields. It was a glorious time for young pulp magazine lovers and their choices this month only fueled their desire for more. Astounding SF (1930-present, now Analog) was in fine form with its cover story by popular veteran pulpster Raymond F. Jones. Astounding was a monthly in 1946. Startling Stories (1939-55) was in the recent habit of offering (along with its usual colorful action fare) a classic tale, and this issue’s choice of a tried and true Clark Ashton Smith story was a winner and helped seal the deal. Startling Stories was transitioning down to a bi-monthly schedule in 1947 and managed 5 issues in 1946 as it cut back. The venerable Weird Tales (1923-54) was a must buy the moment it appeared on newsstands, and the issue below was no exception, for it held another of Seabury Quinn‘s eagerly sought stories featuring his occult detective, Jules De Grandin. Quinn’s stories, by one count, appeared in over half of WT‘s issues, an awesome statistic, with over 90 of those stories featuring the exploits of De Grandin. Weird Tales was a bi-monthly in 1946.] 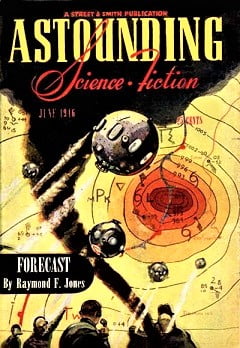 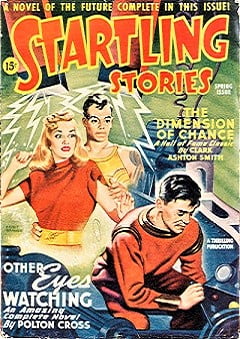 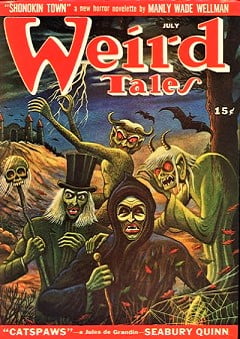