Suspense (1942-62) aired “The Thing in the Window” on December 19, 1946 as its 224th episode out of over 900. As mentioned in the many previous episodes of Suspense presented here, it was one of the most well produced, written, acted, and critically acclaimed of all radio shows during the Gold Age of Radio, many a film star jumping at the chance to perform in an episode of Suspense. After many another radio show had gasped its last during the 1950s, Suspense finally closed shop in 1962 whereupon radio historians proclaimed the Golden Age of Radio dead, television having become the medium of choice in America.

Lucille Fletcher (1912-2000, photo at left) contributed some of the most critically acclaimed radio scripts of all time, including, but not limited to, two of the most famous shows in all of radio history, “The Hitchhiker” and “Sorry, Wrong Number,” both of which were later put to film (and tv) a number of times. Fletcher also wrote “The Thing in the Window,” which is the intense drama of an actor, Martin Ames (portrayed by Joseph Cotten, 1905-1994, photo at right) who sees through the window of his apartment what appears to be a dead man sitting in a chair in an apartment across from his. He sees the man on several occasions, same position and always unmoving, and decides to investigate. The apartment manager of the building across the way denies any man occupies the apartment in question, and indeed it is verified to be occupied by others. Is Ames going mad? Cannot others see what he sees? Further investigation only serves to intensify the mystery as we wonder where this story is heading; a delusional Martin Ames questioning his own sanity, or…a ghost with perhaps a story to tell. As expected from a Lucille Fletcher tale, the script takes the listener in an unexpected direction due to the clever method if its telling, and makes us appreciate that evil can originate from many a source.

Of associational interest to SF fans (and again, something we have thumbnailed before; see above links) is that Lucille Fletcher was married to radio and film composer Bernard Herrmann (1911-1975, photo at right) from 1939-1948. Both Fletcher and Herrmann worked for Orson Welles in his early radio days (Fletcher writing the supernaturally imbued “The Hitchhiker” specifically for Welles, and Herrmann composing the score for Welles’s famous radio broadcast of October 30, 1938 for H. G. Wells’s “The War of the Worlds,” among others). Herrmann also composed the score for many Suspense episodes, and did the same for such classic Alfred Hitchcock films as Psycho, Vertigo, and North by Northwest (again among others). A few of Herrmann’s genre scores include those for The Seventh Voyage of Sinbad, The Day the Earth Stood Still, and Fahrenheit 451.

{Braving the December 1946 cold a week before Christmas proved no obstacle for the neighborhood angels (they were all of a sudden innocent angels before Christmas) who bundled up and gathered at the corner newsstand to trade wishlists they’d asked for Santa to grant, and to further add to their ever-growing pulp magazine collections. As always and forever, Astounding (1930-present, now Analog) was a monthly offering and a first choice. fantastic Adventures (1939-53) promised adventure and oddments of various and sundry sorts, and with compelling covers was a favorite. From late 1947 until its final 1953 issue it was a bi-monthly. Weird Tales (1923-54) was always good for dark, bizarre, and macabre tales and its enticing covers were hard to resist. It was also a bi-monthly in 1946 until its demise in late 1954, having cut back from its monthly schedule in 1940.} 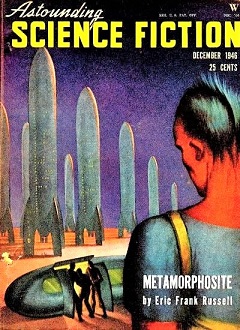 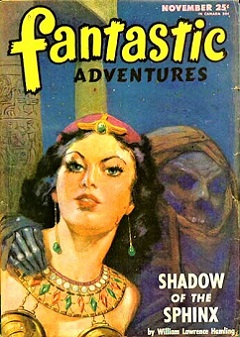 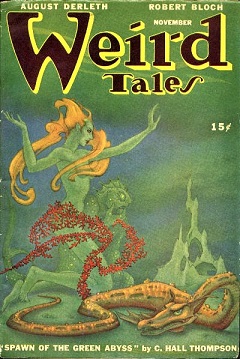