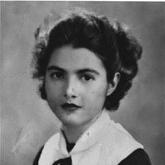 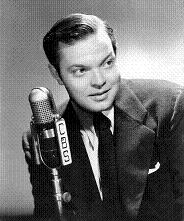 Suspense (1942-62) aired “The Hitch-hiker” on September 2, 1942 as its 11th episode of nearly 1,000. Starring Orson Welles, it is one of the most famous shows in radio history, surpassed only perhaps by “Sorry, Wrong Number” which Orson Welles proclaimed “the single best half hour radio script ever written.” Lucille Fletcher (1912-2000, very young photo at right), coincidentally, wrote both “The Hitch-hiker” and “Sorry, Wrong Number” (starring Agnes Moorehead and which we presented here).

“The Hitch-hiker” tells the story of a man leaving his home (and mother) in Brooklyn and driving to California, and the ghostly hitchhiker he encounters many times along the way. Who is this strange man and why can no one else see him? Cribbing from wikipedia which has an excellent quote from Fletcher about the story: “‘The Hitch-Hiker’ was written for Orson Welles in the days when he was one of the master producers and actors in radio,” Fletcher wrote in her preface to the published version of the radio play, which adapts it for the stage. “It was designed to provide a vehicle not only for his famous voice, but for the original techniques of sound which became associated with his radio presentations. … Orson Welles and his group of Mercury Players made of this script a haunting study of the supernatural, which can still raise hackles along my own spine.” 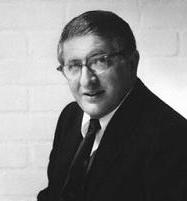 “The Hitch-hiker” originally hit the airwaves on The Orson Welles Show on November 17, 1941. This first-ever reprise on Suspense is the second of at least four radio performances on a number of shows, all of which made use of the atmospheric Bernard Herrmann score. Of interest here is that Bernard Herrmann (June 29, 1911-December 24, 1975) worked with Welles not only on radio for many years (and later on a number of Alfred Hitchcock films, Psycho, Vertigo, et al), but on his now classic early Hollywood films as well (Citizen Kane, for but one), and would go on to be revered as one of the finest and most respected Hollywood composers of all time. He was also married to Lucille Fletcher from 1939-48, the period in which she wrote both “The Hitch-hiker” and “Sorry, Wrong Number.” Small world, indeed.

Of interest to science fiction fans is that Herrmann composed the score for the classic 1951 film The Day the Earth Stood Still, which we presented here, with Michael Rennie reprising his film role in this 47 minute radio version from Lux Radio Theater in 1954.

“The Hitch-hiker” has enjoyed many incarnations, not only on radio, but in TV and film as well. Perhaps the most well known is the January 22, 1960 first season episode of Rod Serling’s The Twilight Zone. While the score used was again Bernard Herrmann’s, this television version switched the protagonist from a male to a female, this time a New York department store buyer — played by Inger Stevens — on vacation to the west coast. Though it may be somewhat unclear as to who the mysterious hitch-hiker is — or what he represents — in both the radio and TZ versions, Serling makes it clear in his ending voice-over who and what the hitch-hiker represents. Rather than provide such a spoiler here, and if you just can’t wait to listen to the radio version first, I provide a link to the Wikipedia article on the TZ episode in question.

{After shaking off the shivers from the above creepy radio drama, unfettered young imaginations would turn from the supernatural to otherworldly stories as given to them in the following magazines in September of 1942. Note that Thrilling Wonder and Weird Tales were bi-monthly publications, while Astounding was the only monthly of the three. Also interesting is that future co-founder of F&SF Anthony Bocuher has the Astounding cover story} 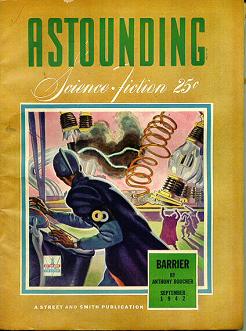 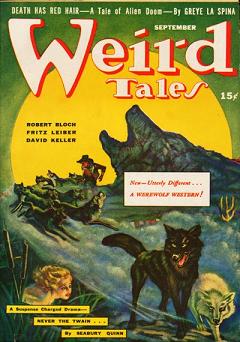