Suspense (1942-62) aired “Return to Dust” on February 1, 1959 as the 788th episode of its well over 900 shows. As recounted in many of the 40+ episodes of Suspense presented here, it was one of the most well produced, written, acted, and critically acclaimed of all radio shows during the Golden Age of Radio, many a film star jumping at the chance to perform in an episode of Suspense, among them Cary Grant, Orson Welles, Jimmy Stewart, Susan Hayward, Vincent Price, Charles Laughton, Loretta Young, Peter Lorre, and Rita Hayworth. After many another radio show had gasped its last during the 1950s, Suspense finally closed shop in September of 1962 whereupon radio historians proclaimed the Golden Age of Radio dead, television having become the medium of choice in America.

“Return to Dust” takes its obvious cue from the late Richard Matheson’s (1926-2013) famous novel The Shrinking Man (1956), and retitled film The Incredible Shrinking Man (1957). Matheson’s protagonist is exposed to radioactive dust after accidentally ingesting insecticide, the radioactivity providing the catalyst for the shrinkage. This differs a bit in “Return to Dust,” where a scientist, in attempting to discover a cure for cancer by shrinking the harmful cells, injects himself with his own concoction and to his detriment finds it to be more effective than he ever dreamed. The story opens with our scientist already a child and desperately attempting to use the phone to call a colleague and professor of pathology for help should he soon grow too small to operate the phone. There are some neat twists to this adaptation that only radio could pull off effectively (no giant cats or spiders which work better for film), and I must say the tension is almost palpable as our man grows smaller and smaller, and his desperate pleas become more frantic. Kudos must be given to the 26 year-old writer, George Bamber (1932-    ), and voice actor Richard Beals (1927-2012) who plays the ever-dwindling scientist and turns in a chilling performance.

Bamber’s minimal contributions to written SF include The Sea is Boiling Hot (Ace, 1971) and his short story “Ottmar Balleau” (Rogue, March 1961), but was so well-liked that Judith Merril picked it up for her 7th Annual Edition: The Year’s Best S-F (1962). About Bamber’s story Merril wrote: “It is S-F: first rate imaginative, sepculative fiction. It is also, by the way, another FPS (First Published Story, for future reference)–and again, by an already established writer–this time of radio drama, most notably for the CBS Radio ‘Suspense’ show.” 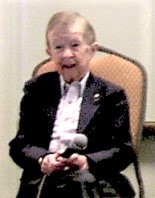 As for Richard “Dick” Beals (photos left, and right), he stood 4′ 7″ and weighed close to 70 pounds, whch he attributed to a glandular disorder. He never passed through puberty, which accounted for his high voice. Counting both his animated cartoon voice overs and live action appearances he worked from 1947-2005. For just a few of the many titles featuring his cartoon voice work we have The Snow Queen (1957), The Gumby Show (1962-67), The Jetsons (as Arthur Spacely, 1962), The Flintstones (1964, as Kids, Elf #1, and Scouts), The Puppetoon Movie (1987, as Speedy Alka-Seltzer, for which he was the voice for the long-running commercial), Roger Ramjet (1965, as Yank and Dan), The Addams Family (1992-93, as N. J. Normanmeyer), and The Bugs n’ Daffy Show (1996, as additional voices). His live-action work included appearances on tv’s My Little Margie (1955), Peter Gunn (1960), and as the voice of Pinnochio in the 1996 horror film Pinnochio’s Revenge.

[A trio of Dick Beals’s animated voice over roles.] 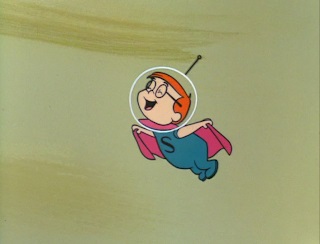 {The cold of February in 1959 hardly deterred the neighborhood gang from a trip to the corner drugstore where they could stoke their imaginations with some great SF pulp magazines. Astounding SF (1930-present, now Analog) never failed to work its magic and this issue was no exception with an exciting cover story by one of the early SF masters, Murray Leinster. In 1959, as always, Astounding was a monthly. The Magazine of Fantasy & Science Fiction (1949-present) had now eschewed running classic stories along with original work and now proclaimed that every story was new. This issue ran (among others) what was to become one of Damon Knight’s classic stories, “What Rough Beast.” In 1959 F&SF was also a monthly. Galaxy (1950-1980) began its run a scant year after F&SF made its debut. Along with F&SF, Galaxy was a breath of fresh air to many writers, expanding the spectrum of themes and subject matter many wanted to write. This issue was loaded with some of the most prominent names in the field: Simak, Pohl, and Sheckley. Note that Frederik Pohl’s name is misspelled, adding a “c” to his first name. Due to ill health, editor Horace Gold turned the editorship over to Pohl (officially) in December of 1961, though the story goes that Pohl was more or less the editor some time before that. One can but guess that Pohl was not (or was he?) the shadow editor for this February 1959 issue and neglected to spot his misspelled name on the cover. Maybe some SF historian could do some reliable sleuthing to determine just when Pohl took over most of Galaxy‘s editorial duties before he became its official editor.* Galaxy went from a monthly to a bi-monthly publication in 1959.

*My curiosity getting the better of me, I emailed SF historian Mike Ashley from the UK about this, to perhaps pin down if Pohl was indeed the “shadow” editor for this February 1959 issue of Galaxy featuring his misspelled name on the cover. Mike was kind enough to take the time to do a little research and a mere few hours before this radio episode was scheduled to go “live” I received his reply:

“I asked Fred Pohl about this years ago, but it wasn’t a specific issue. He told me, in a letter dated December 1976:

‘When Horace became ill I filled in for him, fairly often, over a period of several years. So when he could no longer work at all, I was the logical candidate to take over the job.’

“In The Way the Future Was, Fred says, after noting that he did quite a bit of ms reading for Gold:

“Pohl stops short of saying he also did the final acceptance of stories, but reading between the lines suggests he did everything, but probably got Gold’s approval to the final selection.

“Now, Fred officially took over as managing editor from the issue dated June 1961 but not formally as Editor until August 1962. Gold is still listed as Editor until October of 1961. So Pohl told me that it was over a period of ‘several years,’ and several to me means at least three, if not four. And in his memoirs he says ‘late 1950s.’ “Late” suggests around 1958–is 1957 “late” or still “mid”?? But it definitely wasn’t a sudden change. It feels to me that Pohl took on the bigger commitment during 1958 and continued into 1961 before he was officially recognized as editor. How does that feel?”

First off, I would like to once again thank Mike Ashley for his time and expertise in supplying details and points of historical fact pertinent to past Old Time Radio episodes with a genre focus, as well as now with this specific question. Mike asks how that feels to me, which I take to mean that while it helps, and narrows it down to what Fred’s duties were in a given timeframe that most likely points to him being responsible for the February 1959 issue, there’s still some wiggle room for Horace being responsible, for, as Mike recounts above, Fred says that Horace asked him to ghost the magazine “at times,” thus not every issue. In either case, I suspect some hardworking underling on staff at the time got some sort of stern reprimand from, or was otherwise shamed by either Horace or Fred for misspelling Fred’s name on the cover. Not that it was the first time someone had misspelled Fred’s name, nor would it be the last; magazine editors and longtime fans and genre aficionados who one would think should know better misspell Frederik Pohl’s name to this day. A close second and third for this type of error includes seeing Samuel R. Delany’s last named spelled “Delaney,” and Judith Merril’s last name spelled “Merrill.” Shame on all those who continue to reveal their ignorance of some of the SF field’s most iconic and highly-regarded practitioners. As for who misspelled Fred Pohl’s name on the cover of the February 1959 issue of Galaxy? In all likelihood it will remain at this remove one of the burning and most important mysteries ever to confound science fiction fanzine editors as they seek to complete their historical wall, that being the one and only true history of the science fiction field, one brick at a time.} 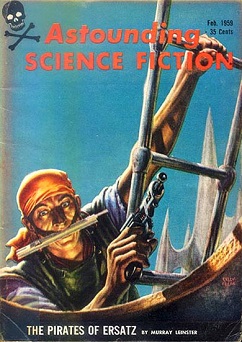 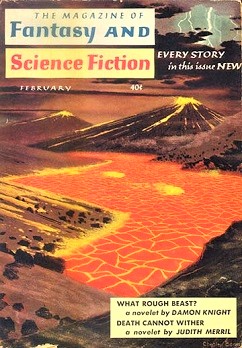 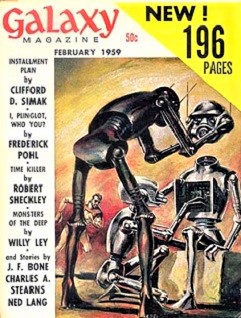