Suspense (1942-1962) aired “Narrative About Clarence” on March 16, 1944 as its 83rd episode out of well over 900, almost all still in circulation. As we have noted in many of the previous episodes showcased here, Suspense was one of the top shelf radio shows in all of radio, for CBS spared no expense when it came to production, scripts, musical scores, the quality of its stories, and the top Hollywood (and later tv) talent it drew to the Suspense studio. When Suspense aired its final show in September of 1962, it was generally acknowledged that the Golden Age of Radio was dead, having given up the ghost to the new medium of television. During its decades-long run, however, famed actors such as Jimmy Stewart, Cary Grant, Humphrey Bogart, Lucille Ball, Olivia de Havilland, and many others jumped at the chance to appear on Suspense.

In this episode, the Clarence of the title refers to the half-brother of the wife of a married couple. He has spent time in India learning about mysticism and the occult, and has now more or less forced himself into his half-sister’s home upon his return–against the objections of her husband. Clarence does indeed seem to have strong powers of suggestion, if not the power to actually hypnotize and bend people to his will, and soon enough the story takes on ominous overtones. Under his thrall, the wife and a servant protect Clarence and his dark maneuvers and scheming, providing him the opportunity to further the evil 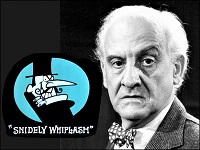 plan he works on behind closed doors. Only the husband can see what is happening to his household and those within it, as the walls of the reality he knows begin to close in around him, making him doubt his own sanity. “Narrative About Clarence” is a slowly evolving psychological horror story of the first order, well executed, with an even scarier twist at its conclusion. Noted actor Hans Conried (1917-1982, photo at right) plays the husband. Known primarily as a character actor, his career spanned some 44 years, from 1938 until his death. Among his many tv and film roles (some voice overs) were Journey into Fear (1943 as Swami Magician, starring Joseph Cotten & Orson Welles), The Barkleys of Broadway (1949, as Ladislaus Ladi, starring Fred Astaire & Ginger Rogers) Bus Stop (1956, as the Life Magazine photographer, starring Marilyn Monroe), Maverick (1958 episode “Black Fire” as Homer Eakins), The Bullwinkle Show (1961, as Snidely Whiplash), Mister Ed (1962, “Ed and Paul Revere” as Igor), Gilligan’s Island (1964-65, 2 episodes as Wrongway Feldman), and Halloween is Grinch Night (1977, as the narrator and voice of The Grinch). Not as distinctive in his early active years (as in this radio episode), his unique voice became his meal ticket in later years, and he excelled in voicing iconic characters in the animated/cartoon field.

{March of 1944 saw the United States in the throes of WWII, and though finances might have been tight for many, the neighborhood gang never failed to scrape together enough nickels and dimes for their favorite reading material, typical examples from the local newsstand shown below. Astounding was as solid as ever with its monthly schedule and was always a favorite. The issue below sports the cover story by one E. Mayne Hull (first name Edna) who was the wife of author A. E. van Vogt until her death in 1975. Planet Stories was a quarterly in 1944 and featured another of Leigh Brackett’s popular stories, this one a novella titled “The Jewel of Bas,” which was reprinted in her 1977 collection The Best of Leigh Brackett (1977). Weird Tales held to its usual bi-monthly schedule in 1944 and what a lineup: Manly Wade Wellman, Seabury Qunn, Ray Bradbury, August Derleth, and others. It’s a good bet that the Seabury Quinn (1889-1969) tale featured his popular occult detective Jules de Grandin.} 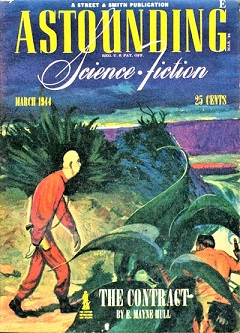 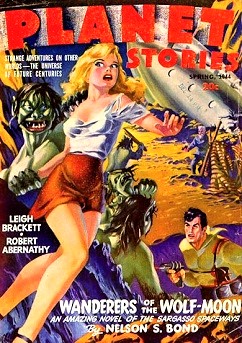 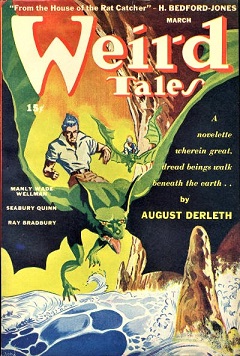