Suspense (1942-1962) aired “Drury’s Bones” on January 25, 1945 as its 127th episode out of 945. When Suspense aired its final show on September 30, 1962, and when many other radio programs had closed shop over the past 12 years due in large part to the advent of television, radio historians declared that the Golden Age of Radio had come to a close. Suspense was one of the longest running, classiest, easily one of he overall best written, acted, and respected radio programs of all time. Hollywood stars of all stripe sought to appear on its shows, a few among them being Cary Grant, Orson Welles, Jimmy Stewart, Susan Hayward, Vincent Price, Charles Laughton, Loretta Young, Peter Lorre, and Rita Hayworth. The great composer Bernard Hermann did the musical scores. Hermann would go on to work with Alfred Hitchcock on many of his classic films including Psycho, North by Northwest, and Vertigo. Other films for which Hermann wrote the score included several for Ray Harryhausen pictures, episodes of The Twilight Zone, and probably the most well known to SF fans, The Day the Earth Stood Still. Suspense was a class act all the way around, and its decades-long run and then eventual demise was indeed the final blow to the era of radio as the dominant medium in American culture.

Boris Karloff was born William Henry Pratt (1887-1969) but of course is known worldwide by his famous stage name as perhaps the most iconic name in the horror film genre for his roles as the Frankenstein monster. Here he takes the starring role of a man who awakens one night in a London alley in the year 1910 after being assaulted viciously. Seeking a nearby establishment for aid, his rescuers are unable to discover who this stranger is, for the blow to his head has caused him to have total amnesia. Through a fortuitous set of circumstances and to help this unlucky man regain a semblance of a life, he winds up at a low-level job in the offices of Scotland Yard. Working his way up through the ranks over the next 20 years, he is now a respected investigator. Though working on current cases, he is also given a cold case to look into; a murder case now 20 years old. Piece by piece, and clue by clue he comes to the frightening possibility that he might be investigating himself! How can this be? How it all unfolds makes for a taut mystery, with parts of the life of the man he is investigating coming to light–that he was a doctor of sorts (according to a now much older neighbor) who had delivered to him via an assistant for his experiments, living creatures–including a human body. So what is the sum of these parts, this body of circumstantial evidence, and what does our amnesiac investigator discover of himself and the murder? Karloff is his usual superb self  here, his somber tone giving a sense of foreboding and dread to every line. I’m not sure the abrupt change of tone worked at the very end, but Karloff’s performance easily steals the show and overshadows any perceived minor flaw given the totality of the entire narrative. And besides, it’s Suspense, and it’s Karloff.

{The neighborhood armchair junior space cadets bundled up from head to toe to buttress themselves from the January 1945 winter cold, and shivered all the way to the corner newsstand where they would warm their imaginations with a wide selection of their favorite reading from which to choose. At the top of their list was Astounding (1930 to present, now Analog) which was in 1945–as it had been since its inception–a monthly publication. Startling Stories (1939-55) was a quarterly in 1945, though for over half of its 16-year run it was a bi-monthly. Thrilling Wonder Stories (1936-55) was also a quarterly in 1945.} 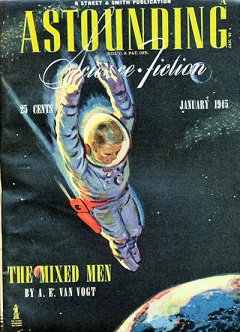 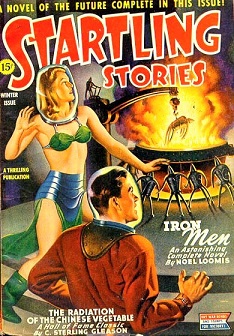 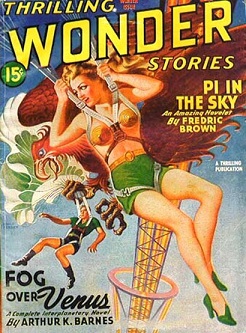